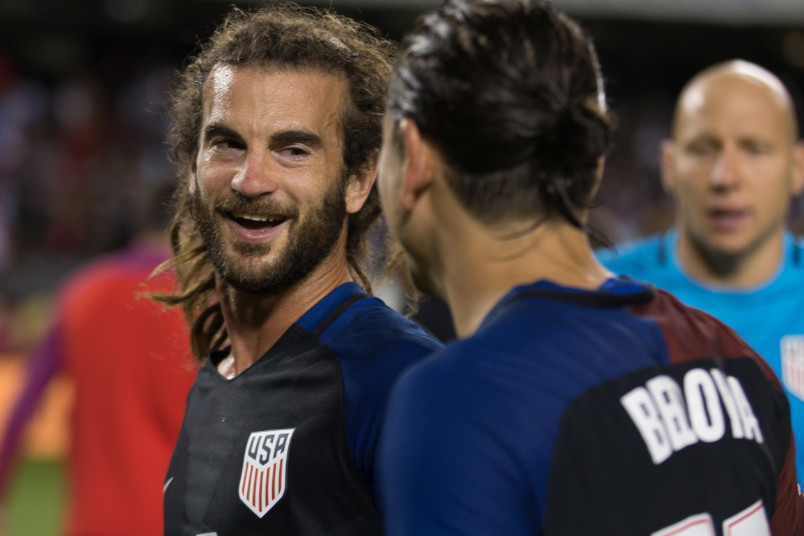 Tuesday’s soccer news starts with USMNT and Real Salt Lake player Kyle Beckerman announcing that 2020 was his final season in professional soccer. Beckerman played in the 2014 World Cup and was part of the 2013 Gold Cup winning squad. At league level, he won the 2009 MLS Cup with Real Salt Lake and was a six-time all-star over his 21 seasons.

“I want to thank all the fans from Miami Fusion, Colorado Rapids, and US Soccer for being part of my journey. And to Real Salt Lake, I am eternally grateful,” Beckerman wrote. “There’s no need for a long farewell when I’ve been playing each game as though it could be my last. “My goodbyes have been entrenched in every pre-game huddle, tackle, pass, celebration, and each post-game lap around the field.”

Moving to the soccer scores, Owen Otasowie subbed out in the 60th minute of Wolverhampton’s 2-1 loss at Burnley in the Premier League. Trailing from goals in the 35th and 51st minutes, Fabio Silva converted a penalty for Wolverhampton in the 89th. Otasowie saw yellow in first-half stoppage time.

“Owen did well,” Wolverhampton coach Nuno Espirito Santo said. “He’s a good player. He’s strong, he’s physical and he’s very young, but he’s growing, he’s improving a lot of aspects of his game that he still has to learn, but he’s got a lot of talent. He had a tough game today, but he handled himself well, and he’s going to be back in the future.”

Christian Pulisic subbed out in the 84th minute of Chelsea’s 3-0 home shutout of West Ham. Thiago Silva scored in the 10th minute with Tammy Abraham adding goals in the 78th and 80th. In Spain’s Segunda Division, Shaq Moore’s Tenerife beat Girona 2-0 at home. Bruno Wilson put Tenerife up in the 7th with Fran Sol doubling the lead in the 34th. Both teams finished a man down with Girona seeing red in the 74th and Tenerife’s Alberto following in the 75th.

Bobby Wood subbed on in stoppage time for Hamburg’s 2-1 win at Karlsruher in the 2.Bundesliga. Bakery Jatta scored for Hamburg in the 3rd minute with Karlsruher equalizing in the 14th. Playing a man up from the 77th, Simon Terodde scored for Hamburg in the 82nd minute. Sebastian Soto subbed out at halftime in Telstar’s 2-1 win at Yong Ajax in the Eerste Divisie. Down a goal from the 11th minute and up a man from a 48th minute Yong Ajax red card, Rashaan Fernandes equalized for Telstar in the 54th. Niles Van Wetten scored their winner in the 84th.

Also in the soccer news, Club America announced Miguel Herrera is no longer its coach following the Champions League exit to LAFC. Concacaf imposed a four-game ban on Herrera and LAFC assistant Ante Razov over an altercation during first-half stoppage time. SI.com’s Brian Straus previews the 2020 Concacaf Champions League final and what it means for MLS. The LA Times’ Kevin Baxter on LAFC playing for its first trophy. MLSsoccer’s Charles Boehm looks at what it took for LAFC to get to the final. ESPN’s Tom Marshall with the potential for Concacaf to have a champion that isn’t from Liga MX.

With Major League Soccer famously against dynasties, the Columbus Crew looks to become the fourth team to successfully defend its title.