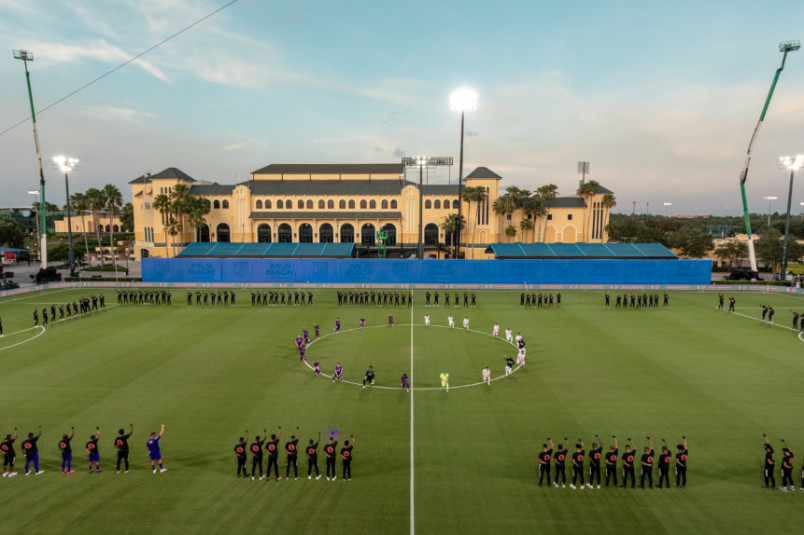 By Clemente Lisi – NEW YORK, NY (Dec 14, 2020) US Soccer Players – It took nearly 300 days, a tournament played in a bubble, and the remainder of the season with no or limited fans in the stands to finally end the 2020 season, the longest and oddest in MLS history. In a year where the league celebrated its 25th year, Major League Soccer marked a most unusual season. How could it not be the case with a pandemic that engulfed the nation and the world?

It seemed fitting that the team to win it all this season would be the Columbus Crew. After all, the Crew is an original MLS franchise that also happened to be on the brink of relocating just a few years ago. Instead, the team got a new investor/operator group, stayed in Ohio, and proved that it could put on both an entertaining, and more importantly winning, product on the field.

The underdog Crew turned that around on Saturday night at the MLS Cup final, defeating the defending champion Seattle Sounders 3-0 at MAPFRE Stadium. For the Crew, the win marked their second MLS Cup title in team history. Columbus also became the first original league franchise to win MLS Cup since the Los Angeles Galaxy did it in 2014.

With the season at an end, here are five takeaways from MLS in 2020.

Dealing with a global pandemic

This has been a year of challenges and obstacles. MLS paused the season back in March amid a rising number of virus infections. The league, relying on safety protocols, returned with the MLS is Back Tournament, played in a quarantine bubble in Orlando. The regular season resumed shortly after, with teams limited to regional games. As a result, the season took on an inconsistent feel, but the MLS Cup playoffs became one of the most exciting in recent memory.

The pandemic had obvious impacts on all of this. Players weren’t available. Teams had to shift quickly and often as the league announced the next stage of the restart. The pressure on players to get the games in ran alongside the obvious economic losses for the league and its clubs. That will undoubtedly carry forward into next season.

The death of George Floyd in May while in police custody triggered a national reckoning on race and racial injustice. MLS players followed suit by expressing solidarity with the Black Lives Matter movement that was visible across the country. Black Players for Change, made up of 170 players, coaches and staff members, added to the push for racial equality.

The group addressed racism through peaceful demonstrations before kickoffs and by wearing T-shirts with slogans of support. Black Players for Change also started a voter registration drive this fall to coincide with Election Day and worked with the league and the US Soccer Foundation to build mini soccer fields.

MLS named its 25 greatest players ever, with 15 of them Americans. It’s no surprise that a player with a trophy named after him like Landon Donovan makes the list alongside former teammates David Beckham and Roy Keane. Add in early MLS and USMNT players like Cobi Jones, Preki, Jeff Agoos, Tony Meola, and Eddie Pope. Include a few of the regulars in the MVP conversation season-after-season, and players that proved their value leaving for Europe and eventually returning like Carlos Bocanegra and Clint Dempsey.

Like any list of this type, the players left off end up being as interesting as who made the cut. Taylor Twellman and Thierry Henry are the notable omissions, but it’s tough to argue with the players on the list. MLS has a rich history that isn’t reflected in the National Soccer Hall of Fame voting. The league recognizing the contribution of its early stars begins the process of righting that oversight and reminding younger fans of this shared history.

It was a very good year for emerging young talent. In the MLS Cup final, Crew homegrown midfielder Aidan Morris was a surprise starter in place of Darlington Nagbe, who tested positive for COVID-19. Morris became the youngest player in MLS history to start in a final at 19 years and 27 days old.

One of the highlights of this season is the confirmation that there is a new youth movement afoot. FC Dallas’s Ricardo Pepi, at 17 years and 58 days, scored his first MLS goal back in March. Three other teeangers, Cade Cowell of the San Jose Earthquakes, Caden Clark of Red Bull New York, and Christian Torres of LAFC joined him. Torres’s goal made him the fifth- youngest player in league history to score at 16 years and 168 days old.

The man who coached the United States at two World Cups and already has a Hall of Fame blazer keeps going. Without taking anything away from Porter, who did a phenomenal job with Columbus, or to Jim Curtin of the Philadelphia Union for being named 2020 Coach of the Year, Bruce Arena deserves major kudos for guiding the 8th-seed New England Revolution to the Eastern Conference Final.

Arena’s ability to motivate the Revs, a franchise that has been disappointing in recent years, to go this deep into the playoffs speaks to his experience and work ethic. Even without big-name players, the 69-year-old coach gets the most out of his team. After being in charge of two dynasties in DC in the 1990s and LA in the 2010s, Arena got within one game of the final.