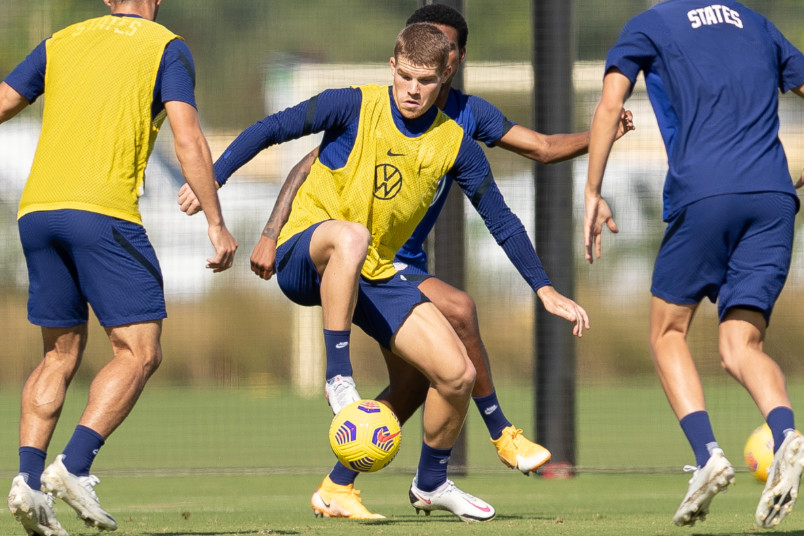 The USMNT quickly returns to action in another unlikely circumstance, this time an out-of-window friendly against El Salvador in Fort Lauderdale (7:30pm ET – ESPNews/UniMas). The friendly is mainly for MLS players from teams that didn’t make it to the semifinals. There are also the additions of CJ Dos Santos, Sebastian Soto, and Tyler Boyd due to their club situations. Dos Santos is in Benfica’s developmental system. Telstar opted to release Soto for the midweek game, and Boyd is ineligible to play for Besiktas until January.

What this gives USMNT coach Gregg Berhalter to work with is part of his scenario for games that count. As much as the focus remains on European-based players with elite clubs, a first choice lineup will undoubtedly include MLS talent. The return to play for the USMNT in November only allowed for one MLS-based player. Those games also were without Christian Pulisic due to injury and Josh Sargent because of quarantine issues with his club.

It won’t be until the March window at the earliest that Berhalter will have the opportunity for a full group. Even then, the potential for restrictions and issues could once again limit his options. That could push full and first choice to the summer when the USMNT will be preparing for the conclusion of the Nations League and the Gold Cup. The number of games on the schedule will likely require rotation.

Berhalter’s approach is segmented by circumstance. Normal may not return to the program for some time. It’s with that in mind that we try to figure out what we might learn from a December friendly against El Salvador.

The carryover from November

The approach to the Wales friendly looms large for El Salvador. This is an untested version of the USMNT against a weaker opponent. There’s not necessarily a reason to experiment with tactics, but if Berhalter wants a false nine, he has an opportunity here. If he wants something else entirely, reorganizing with this group may be the time to try it. That’s an advantage for a squad brought together by circumstance. It’s a scenario with the potential to show Berhalter what he can do over a short window.

The two European additions give Berhalter the option of seeing how strong an offensive lineup he can field. Both Soto and Boyd are proven goalscorers in Europe, with Boyd proving his worth in the Turkish Super Lig. Why that ended up with him off Besiktas’s roster was an administrative choice to satisfy a foreign player quota. Boyd has already shown that he can create opportunities in a tough league. Soto is emerging at Telstar, the same club that helped develop Andriya Novakovich when Reading was loaning him around Europe. Both can be the primary forward or partner, meaning Berhalter loses nothing should he simplify things with a standard strike partnership.

MLS clubs preparing to return to play in the Concacaf Champions League later this month compounded availability issues. Berhalter called in Dos Santos from Benfica and David Ochoa from Real Salt Lake, both players with no caps. DC’s Bill Hamid is the other option, with seven appearances for the USMNT. Where these three would land on Berhalter’s depth chart is almost irrelevant in December. They’re the options, with plenty of lead time to convince the coach which one of them starts. Hamid is an established veteran, the easiest option for a player that has the experience.

Walker Zimmerman arrived in camp as the MLS Defender of the Year, completing a surprising season for Nashville. What wasn’t was Zimmerman once again showing he is an elite MLS talent. That should transition nicely to whatever defensive alignment Berhalter chooses. It’s the same situation for Aaron Long, the other player with over 10 caps among the defenders. Against an El Salvador attack with a domestic player, a USL Championship player, and a free agent, the MLS back line should be able to hold. It’s not exactly pressure, more of meeting an expectation.

Getting the most out of December

The big picture takeaway is going to be keeping control through 90 minutes. The USMNT fell behind early against Panama, creating a scenario where they needed to reestablish their gameplan. They did that well, ending up with a lopsided win. That kind of situational soccer is valuable for any group after such a long layoff. This squad needs to show that they can handle problems and make necessary adjustments in real time. There may not be much of a need on Wednesday night, but that’s the difference for a squad understanding their coach’s tactics and choices.