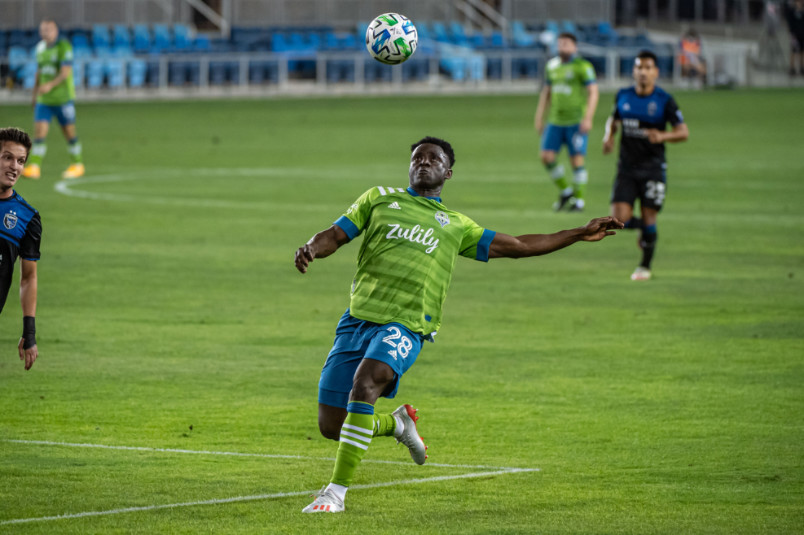 By Jason Davis – WASHINGTON, DC (Dec 11, 2020) US Soccer Players – When it comes to the Seattle Sounders, most of the attention goes to the club’s trio of MLS-elite attackers. This makes a lot of sense. Nicolas Lodeiro, Jordan Morris, and Raul Ruidiaz might be the most dangerous combination of goalscorers in one team in Major League Soccer. Both Lodeiro and Morris made the season-ending Best XI on the strength of their campaigns. Defenders across MLS quake in their cleats over the prospect of defending Ruidiaz.

No team can reach a final without a well-rounded lineup. Seattle’s Big Three hog the spotlight in Columbus on Saturday at the 25th MLS Cup title game. Meanwhile, it’s the less-heralded but equally important figures doing work in the defensive areas of the field.

The pair of players likely to start for the Sounders at center back speaks to the club’s ability to pivot when plans change. To call it a surprise that Shane O’Neill and Yeimer Gomez Andrade are the duo that helped push Seattle to the championship match would be something of an understatement. Andrade appeared to be in the plans for this season. O’Neill’s emergence as a trusted starter defied predictions ahead of 2020.

The story of Seattle’s back line in 2020 starts in 2018 when the Sounders were fresh off a second-consecutive trip to the MLS Cup Final. Seattle won the club’s first championship of its MLS era in 2016 and fell just short of achieving back-to-back championships in 2017. Expectations, as one might expect, were high for 2018.

As had been the case for every season since his arrival in Seattle in 2014, Chad Marshall was the rock at the back for the Sounders. Marshall was the embodiment of the cliche “the first name on the team sheet” as a heady defender with an imposing physical presence and a personality that bonded teams together.

In 2018, Marshall was as steady as ever, racking up 30 appearances and over 2,500 minutes. His most frequent partner at the back was something of a surprise, however. Instead of Roman Torres, the powerhouse who regularly lined up alongside Marshall during the MLS Cup final season of 2017, the Sounders turned to Korean defender Kim Kee-hee.

Kee Hee claimed the starting spot by the end of the season’s second month and added an extra dimension by pushing up into the Sounders attack. Though Seattle ultimately fell short of a return trip to the final thanks to a penalty shootout loss against the Timbers in the Western Conference semifinal, Kim proved his worth and looked primed to maintain his partnership with Marshall for years to come.

2019 had other plans. Not for Kee-hee, but for Marshall, the MLS great and only three-time winner of the League’s Defender of the Year Award. After playing just eight matches, Marshall announced his retirement at the age of 35. It was a surprise, if only because the club expected Marshall to finish out the season before calling time on his storied career.

A plan for life post-Marshall kicked into gear. One of the key figures in defense during the 2017 campaign, Roman Torres, returned to the rotation at center back, though the Sounders also recognized the need to get younger at the position. Just ahead of the close of the primary transfer window in May, the club signed 24-year-old Xavier Arreaga. He earned 12 starts after joining, presumably setting the stage for his takeover of the spot vacated by Marshall.

Until Arreaga proved ready to make the position his own full time, the Sounders still had Kim and Torres anchoring the defense. That pair finished the season as first-choice for head coach Brian Schmetzer, completing the job with a championship.

The Sounders aren’t unique in having to deal with significant changes in the middle of a season. The Sounders are unique in that those changes rarely derail their quest for a trophy. To call it “depth” is to sell it short.

Remarkably, the only time Seattle missed out on playing for a championship in the last five years was when they were mostly settled at the center back position. Every year in which at least one of the two spots was subject to heavy rotation, the Sounders reached the Final.

That’s true again in 2020. Arreaga arrived in Seattle last year with the expectation that he would be Marshall’s long-term replacement. Instead, the Sounders went with a player no one expected to be in the starting lineup alongside a preseason signing.

Kim left for South Korea in the winter after negotiations with the Sounders broke down. That championship and the pending CBA complicated Seattle’s attempt to stick to the plan. Players wanted increases. The pending CBA forced clubs to delay signing new contracts.

As for Arreaga, he lost his starting spot midway through the calendar to a journeyman center back who hasn’t been more than a support player since 2016-17, when he made 23 starts in the Dutch second division. By the standards of the rosy, platitude-rich press releases that accompany player signings, the announcement of O’Neill’s acquisition back in January seems to damn with faint praise.

“Shane is a good veteran player that addresses a position of need for us,” said Sounders General Manager Garth Lagerwey. “He’s a guy with experience in MLS and abroad, and we’re looking forward to welcoming him to the squad as preseason camp begins.”

O’Neill joined to be a body in the roster. He was a potential depth piece during a busy season for the defending champions. By the restart, he’d claimed a spot alongside Gomez Andrade. Down the stretch of the season, that duo locked in as Schmetzer’s first-choice center back pairing. O’Neill’s play made moot the issues with Arreaga and started a run of consistent defensive lineups that launched the Sounders’ run to the playoffs.

The Sounders wouldn’t be in the final if not for O’Neill, but not just because of his defending. His goal against FC Dallas, the game-winner from a set-piece and his first goal since 2016, lifted the club into the conference championship game. The dramatic comeback win was only possible because of the lightly regarded, well-traveled reserve center back they signed way back in January.

With so much success, it’s easy to take the Sounders and their ability to navigate the treacherous pitfalls of a season for granted. Star goalscorers grab headlines, but it’s the work done down the roster so players can fit in as necessary and maintain the high standard of the club that sets Seattle apart.

The Sounders attackers will get most of the attention on Saturday in Columbus. Lodeiro, Morris, and Ruidiaz deserve the praise. So do the club’s center backs, a surprise package with a big role in this Seattle story.