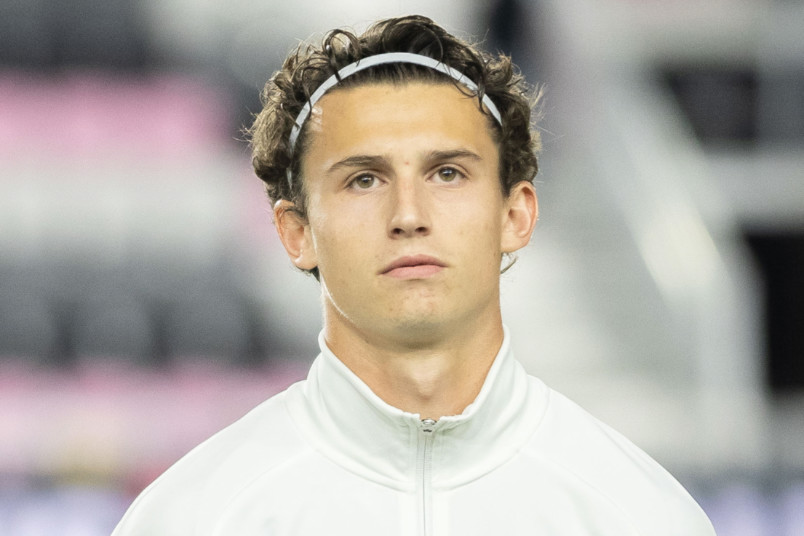 By Jason Davis – WASHINGTON, DC (Dec 18, 2020) US Soccer Players – Many things marked the 2020 Major League Soccer season. The pandemic, most obviously, with its massive impact on the schedule and the stress placed on players and coaches. The story of the Columbus Crew champions in 2020 after nearly moving two years ago. A successful expansion season in Nashville, not only qualifying for the playoffs but winning once they got there. An influx of big-money transfers, several of whom led their teams to playoff glory in the postseason. The rise of of the young player across the league.

It’s that last development that was always coming but got a significant boost from the difficult circumstances brought on by the pandemic-affected season. It certainly helps the prospects of so many academy-bred players in MLS that the league is suddenly a red hot market for talent.

Philadelphia’s sale of Brenden Aaronson to Red Bull Salzburg feels like the kind of transaction that could start a domino effect. MLS teams should see giving their youngest players time not just as a means to winning games, but as part of the investment in future financial return.

Aaronson broke through with Philadelphia in 2019 and parlayed an excellent season into a move abroad. There’s no guarantee any of the players who made their first marks in 2020 will do the same. Still, the developing market and the success of American players brought up in MLS academies makes it a distinct possibility.

Even if none of them leap across the Atlantic, they figure to be important contributors to their teams in 2021. The new year should be a move back to something closer to normal for professional soccer in the United States and Canada, pushing young players to acclimate. 2020, for all its strangeness, worked as an incubator because clubs needed to reach further down their rosters. The compact schedule played to the strengths of younger players. Next season will be a different type of grind.

Should the trend hold, 2021 will also deliver a new batch of fresh faces. There are players, still unknown to the wider world, who will be central to their teams’ efforts by next summer. The production line never stops.

For the moment, let’s focus on the players who made a name for themselves in 2020 and look ahead to their 2021 seasons. Consolidating the success of their first significant professional minutes won’t come easy. The irony of doing the hard work of breaking through in one season is that achievement only ramps up expectations for the next campaign.

Top of the list is the New York Red Bulls’ Caden Clark. The 17-year-old midfielder exploded onto the stage in October with a pair of highlight-reel goals and capped his season by scoring against Columbus in a first-round playoff loss. Clark spent most of 2020 featuring for the club’s USL Championship entry, Red Bulls II, where he collected 11 starts and scored three goals. He played a total of 279 minutes in MLS in 2020.

Clark’s MLS output stands in sharp contrast to his more limited impact in many more appearances at the second division level. It would be natural to believe that a goal every 93 minutes and an assist every 56 minutes is unsustainable for a teenage player with the first team. The likelihood is that Clark will slow down, perhaps dramatically, if and when he plays for the Red Bulls in 2020.

That would be a reasonable assumption even without the complicating factor of Gerhard Struber’s arrival in New Jersey. Struber did take the reins of the Red Bulls in their playoff loss to Columbus, and he did start Clark. However, an offseason of roster turnover and a preseason of training can change a coach’s outlook. Struber got the job with New York, in part, because of his connections to the Red Bull organization and his history of working with young players in the Austrian outpost of the global program. Nothing is guaranteed.

As rapid as Clark’s rise was, FC Dallas fullback Bryan Reynolds matched or bettered it depending on your allegiances. When the season began, there was no guarantee that Reynolds would play a minute for the senior club in 2020. Reynolds made 10 appearances in 2019 for FC Dallas but collected just 119 minutes in the process. He also played several different positions in those cameos, making it unclear where he would lineup during the 2020 season.

By the second week of September, Reynolds had played a total of 30 minutes. Then Dallas sold right back Reggie Cannon to Boavista of Portugal’s Primeira Liga. Cannon’s departure opened up a spot for Reynolds and allowed his club to showcase his talents. After Cannon’s move, Reynolds started 14 games down the stretch. He locked onto the right back spot as his own and wowing observers around the league in the process.

It was hard to believe that FC Dallas not only had a readymade replacement for Cannon after they sold the homegrown star, but that the teenage player coming up behind him represented no dropoff in quality. Based on the finish to 2020, Reynolds looked primed for a massive 2021.

There is one wrinkle, however. Like Cannon before him, Reynolds’ talents as a modern fullback have garnered him significant attention abroad. Even now, rumors swirl linking the Fort Worth native to big clubs in Europe for eye-popping fees. FC Dallas might be in a fight to hold onto him through the winter. Then they could still transfer him if the offers are still on the table come the summer.

Clark and Reynolds made their moves into the starting lineup late in 2020. San Jose teenager Cade Cowell got a head start, earning his first minutes in March and remaining a part of Matias Almeyda’s rotation through the rest of the season. Cowell totaled 519 minutes in 2020. Barring major changes with the Quakes, he’ll improve on that number next season.

Then there are the teenagers who entered the year already established with their clubs. Sporting Kansas City midfielder Gianluca Busio took up a new deeper spot in the lineup and parlayed that responsibility into a year of massive growth. Peter Vermes will be counting on Busio to be the anchor of his midfield group in 2021 and years beyond. That’s if Busio, too, isn’t bound for European pastures in the near term. The buzz around him is audible as 2020 draws to a close. Gianluca Busio 2020 was aberrational. If 2021 is a return to normal, there’s a chance that those things that marked 2020 won’t carry into the new year. Thanks to the stellar play of some of the league’s youngest players, coaches around MLS have no reason to stop this trend. The continued rise of youth across MLS should be a marker of 2021 as well.