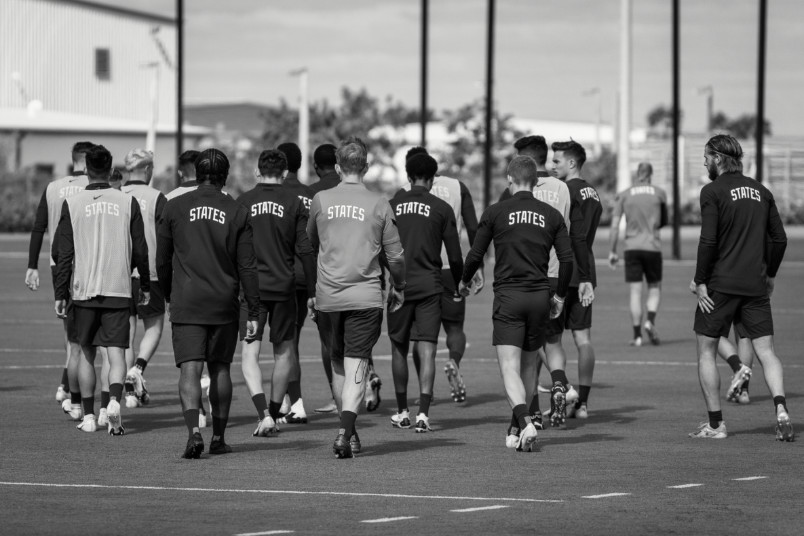 By Charles Boehm – WASHINGTON, DC (Dec 4, 2020) US Soccer Players – The USMNT doesn’t get together in December all that often. It’s traditionally a dark spot on the international calendar, a time of club games and winter downtime for most of North America and Europe. That’s why Wednesday’s friendly vs El Salvador in Fort Lauderdale is the first USMNT match in December since 2001. Exceptional times make for exceptions to the norm. At the tail end of a lost year, USMNT coach Gregg Berhalter is carving out as much time with his players as possible, even in the absence of a FIFA window.

Most of this group is Olympic-eligible, and several likely participants are not on hand due to their involvement in the MLS playoffs. It’s in addition to the usual January camp, itself a response to that league’s long offseason. It’s also a sign of Berhalter’s eagerness to make up for lost time. It also suggests that he and his staff are getting down to the nitty-gritty of player evaluation and depth charting.

After a young European-based squad caught the eye of Berhalter and the fans alike against Wales and Panama last month, now a predominantly domestic roster will seek to do the same as competition heats up ahead of a massive 2021.

“For us, it’s really looking to see who’s going to take advantage of this opportunity,” said the coach in a press availability earlier this week. “Who can have a have a good performance in this camp and really try to stake the claim to be the starter on the team? Certainly we have the talent in this pool to show that.”

Here’s five themes to ponder around this camp.

Rest assured that everyone in the pool took note of last month’s promising displays in Europe. Berhalter has a multitude of options to pick from. With a long list of huge occasions looming next year, the window in which to impress the technical staff is closing fast.

“There’s a sense of pressure to continue to do well, as there should always be when you’re representing your country,” said winger Paul Arriola on Wednesday. “This is the top level of soccer in the world and people that represent the country are usually the best players. So I definitely feel that there’s a different sense of urgency. And at the same time, I think that’s going to raise everyone’s game. I think the talent that we have in the MLS, in Europe right now, I think is going to raise everyone to push themselves and find another gear in their career.”

This is huge for anyone who aspires to a spot on the field for World Cup qualifying, Olympic qualifying, Concacaf Nations League, or the Gold Cup.

Making a case to dual nationals

Just like last month, the current group also features a healthy list of dual nationals. Berhalter has cranked up a sustained recruiting pitch to rival those of his predecessors over the past quarter-century. December campers Ayo Akinola, Efra Alvarez, Julian Araujo, Daryl Dike, Marco Farfan, David Ochoa, and Andres Perea are among those who are part of this process. Berhalter explicitly gave his approval to the idea of them and other such players exploring their options before committing to whichever program in which they feel most at home.

This subject takes on additional weight for the many Mexican-American players who are also eligible for El Tri. That’s not only because of the emotions of the border rivalry. It’s also because successful pitches to those talents deny their services to Mexico on the eve of a qualifying cycle.

“They’re still young players, they still have the world in front of them and all we want to do is bring them into our environment and show them what our environment is about, and then it’s going to be up to them to make a decision in the end where they end up committing to,” Berhalter said of his dual nationals this week. “We’ll be fine with whatever decision they make but but I think it’s important that players are able to see what we do and how we work.”

Some three-quarters of the December roster is age-eligible for the Under-23 team that will compete for a place in Tokyo this summer. Olympic coach Jason Kreis is closely involved with the senior squad’s recent activities. He’ll surely have many data points to peruse from this camp. It’s unfolding at the facilities of Inter Miami, where he also runs the academy and second team for the new MLS club.

Kreis may have the toughest job of any US coach over the ensuing months. He effectively has to knit together multiple lineups and rosters with multiple backup options. The Olympics’ small roster size is also a constraint for Kreis. That heightens the value of versatile contributors and FIFA status as a youth tournament, allowing clubs to decline call-ups.

There’s an argument that this U-23 pool is deeper and more talented than ever. It’s certainly bigger than usual thanks to the decision to keep the same eligibility dates despite the delay. Still, it’s a complex equation. The USA’s 12-year participation drought only heightens the pressure.

This region’s road to the World Cup is always a long and treacherous journey. Logistics are a huge piece of the puzzle. That’s a factor in this camp, too, which could turn out to be a dry run of sorts for the sort of staging that will be required when qualifying cranks up next year.

On account of its location and climate, Florida has historically been a preferred location for the USMNT to gather before jetting off to points south and west for away qualifiers. The team has found Orlando, Miami, Tampa, and Jacksonville to be comfortable locales. Now, Inter Miami provides another solid option in Fort Lauderdale, with brand-new facilities and an intimate match venue on site.

“I was blown away by this facility, absolutely blown away by the training ground, by the stadium,” said Berhalter, expressing awe at the quality of what’s intended to be only a temporary home ground for Inter. “The branding, coloring, the architecture, everything is fantastic. A really, really great place to train. I can envision this being a spot where we come before we have to bounce off to the Caribbean or Central America.”

November’s matches revealed a new level of commitment to a more aggressive, high-pressing style. It’s comparable to what many US players worked with at youth national team levels. It seems to mesh well with the skill sets and personality of many of them. Based on what veteran center back Walker Zimmerman said this week, it appears that the MLS contingent will now get a chance to show their ability to execute those principles.

“I was really impressed with the energy and enthusiasm, and the athleticism and commitment to pressing in these last games in Europe. And that’s a big focus for this camp as well, is high pressing,” said Zimmerman. “We’re not sitting in a mid block as much, we’re getting after our opponents to try and create turnovers that lead to scoring chances. And so I thought they did a really good job in terms of their ball recoveries in their opponent’s half in those two games. And you could just see the energy and the speed at which we could close people down, and so I think this camp is going to be no different than that. It’s a big focus, it’s a big talking point for us for the game against El Salvador.”