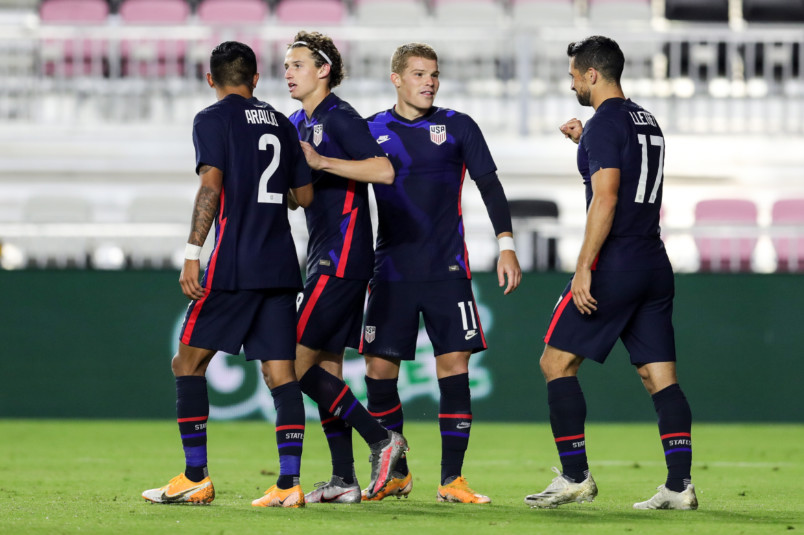 By Charles Boehm – WASHINGTON, DC (Dec 11, 2020) US Soccer Players – With a recession, political turmoil, and a global viral pandemic causing pain and suffering for billions of people around the world, some version of “things could be worse” has become a common greeting for those of us who haven’t hit bottom. Humanity has had little choice but to make the best of bad situations in 2020, and this extends to professional soccer.

The USMNT capped a strange, abbreviated year with Wednesday’s 6-0 shutout of El Salvador in Fort Lauderdale, Florida. Just like the European squad that gathered last month, Gregg Berhalter’s relatively young, mostly domestic roster did all they could to maximize the occasion.

It wasn’t a particularly challenging opponent, but the US made the most of the opportunity to play. It was only the fourth match of the year, all of them friendlies, but they made sure not to lose any of them, finishing 3-0-1 and scoring 12 goals in their final two games. Berhalter handed debuts to five players against El Salvador following nine debuts in November’s two matches, keeping the coach on a record-setting pace of such new introductions.

Some distinct tactical ideas and patterns have appeared across a broad cast of characters. Different lineups have produced comparable levels of defensive organization and attacking movement. The overall age of the collective is steadily trending younger. Olympic coach Jason Kreis has been part of Berhalter’s process. Fans and players alike have renewed reasons for optimism about the depth of the pool and the strength of the collective mentality ahead of an enormously important 2021.

“What’s interesting is that I really saw a determination from the group to perform, and that was what was important,” said Berhalter after Wednesday’s win. “Everyone was watching the games in November, so when this group came in, they were very determined. They knew a bar had been set and they need to maintain that bar…. Guys are pushing. People are saying, ‘If we have a top group, I want to be part of it.’ And I think you can see that on the field.”

Lopsided scorelines against Panama and El Salvador raise questions about the caliber of opposition. The front line was ruthlessly and encouragingly clinical in both cases, however. The coronavirus crisis and the nine-month gap it imposed made any gatherings at all a triumph, fueling energy and enthusiasm among both the overseas and domestic groups. That can only help another Berhalter priority, competing for dual nationals. They were prominent in both the November and December camps as the program made its case for their allegiance.

Those players comprise several of the many interesting and inspiring individual storylines. Others included Paul Arriola making his return from a devastating ACL injury to score Wednesday’s opener and Sebastian Lletget becoming a trusted mainstay all year. Bith are two leaders by example. They’re young enough to fit into the youth movement but already experienced for both club and country.

“It almost brought me to tears after the game when we handed him the man of the match, because imagine what he’s gone through this year,” Berhalter said of Arriola. “You imagine that in January he played his last game for us. He’s played one game since then, and he comes back and performs at this level in December. I’m really impressed with it. It shows what type of character Paul has.”

Even the decade-long back-and-forth about MLS vs Europe has evolved in a more positive direction. Berhalter seems to have struck a balance between extending opportunities on both sides of the Atlantic while celebrating the enormous value of Americans making their way at some of the world’s biggest clubs. The December squad gathered as a group to watch their counterparts in UEFA Champions League action, setting a tone of ambition and upward mobility across the board.

“It’s an amazing thing right now that you can sit down and watch two of the biggest clubs in the world and see two American players not only playing that game, but both Weston [McKennie] and Sergino [Dest] played really outstanding games too, maybe some of the best players on the pitch,” said Chris Mueller, who debuted on Wednesday and earned man of the match honors. “I think it’s great to have that competition.” The USMNT has relied on contributors based both at home and abroad for many years. Some have framed that as a competition or rivalry. Berhalter seems to be cultivating something more like a conversation. With the senior squad and Olympic sides set for an extremely busy and pressure-packed year to come across multiple competitions, he’ll need to dip deep into his pool, while also still pushing the envelope at the top.

It’s been a difficult 2020, and 2021 will pose a different set of challenges. There’s reason to believe the USMNT are as ready as they can be right now.

“The level is clearly raising, and that’s what you want on a national team. You want to see your national team having guys fight for spots, really have to make their mark,” said Arriola. “At the end of the day I think everyone in this country wants us to field the best players that we have, and our goal is to win a World Cup. So we have to do that with the best players and the highest of quality that we have and I think everyone is really trying to raise to that level. And that’s exciting.”