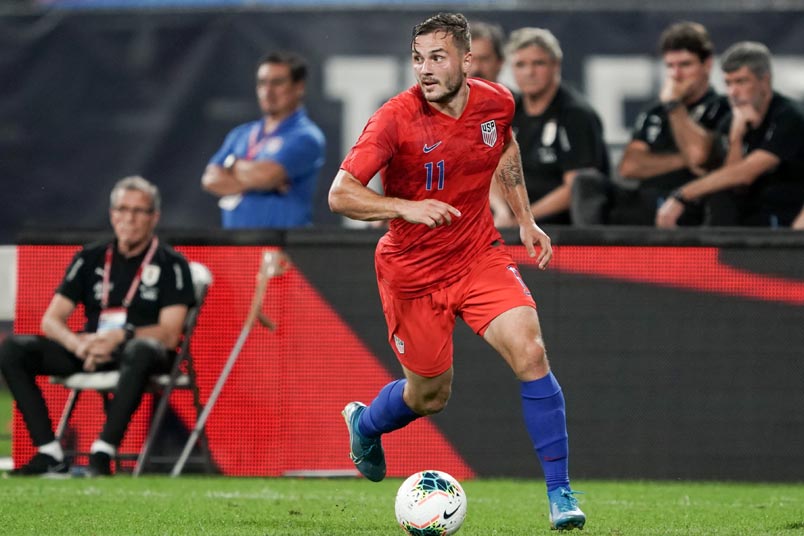 By Jason Davis – WASHINGTON, DC (Jan 27, 2021) US Soccer Players – American soccer fans thought they understood Jordan Morris. Some agreed with his career choices and some didn’t, as much as “agreeing” or “disagreeing” with someone else’s career choices is a justifiable thing to do. Thanks to his loan move to Championship club Swansea City last week, old perceptions are just that. Whoever American soccer fans thought Jordan Morris was, he is now on a path that could prove them wrong.

Before we go any further, it’s necessary to outline why professional athletes, and particularly American soccer players, are rarely granted the privilege of personal choice without judgment. Sometimes it’s as simple as fans being unable to separate the player from the person. Fans want players to act only in the best interest of their teams because that matches the fans’ best interest. That holds regardless of the impact on the player as a person.

Fans of the USMNT tend to want its players testing their game at the highest level. Every time a player does something the USMNT constituency deems not beneficial for the team, he comes under immediate scrutiny. That thinking doesn’t have much room for a talented American player going a different way. It’s as much about validation as competition.

Not that long ago, Morris was one of the USMNT’s most exciting young prospects. Though he emerged from college soccer at a time when attitudes about the collegiate game were quickly souring among the hardcore USMNT supporters, his call-up to the national team while still a player at Stanford made him highly touted.

What then coach Jurgen Klinsmann saw in Morris was a dynamic, athletically-gifted player who could change games with his speed and physical size. When he scored against Mexico in his first game as a US international, he announced his arrival on the national team stage.

Following his final year at Stanford, Morris leveraged his USMNT success to get a trial at Werder Bremen of the Bundesliga. Morris played well enough during that stint that they made an ardent attempt to sign him. Instead, he chose to begin his career in the United States by inking a homegrown player contract with the Seattle Sounders.

There are many understandable reasons evident to outsiders for Morris to have signed with the Sounders rather than take the more risky chance in Germany. Seattle wanted to make him a centerpiece of their attack, guaranteeing that he’d get the type of minutes needed by a young, developing player. The tug of war for his services drove up the Sounders’ contract offer. Morris’s father is the club’s doctor, meaning Morris had stronger ties to the team than the average academy signing.

Nevertheless, Morris’s choice prompted criticism from various parts of the American soccer community. His decision flew in the face of Klinsmann’s entreaty to all talented American players to get to Europe and, for some, showed a lack of ambition. Accepting that Morris did what was best for him and that perhaps doing so would help him be a better player in the long term never gained much traction.

Morris’s experience tracked with that of another highly-touted American attacker from the previous generation, Landon Donovan. Despite his record-setting career for club and county, Donovan remains a controversial figure with fans.

Donovan changed some previously intransigent minds with a pair of loan stints to Everton that proved his ability to play in an elite environment. That didn’t turn into a permanent move to England and a portion of the fan base held it against him.

Morris’s move to Swansea City is not overly ambitious on the face of it. The Swans play in the second division of the English football system and don’t rank among the biggest clubs in the region. As a Welsh team playing in the English system, Swansea occupies a sort of soccer purgatory. They’re good enough and rich enough to occasionally reach the Premier League, though it’s unlikely the club will ever be stable enough to stay there.

The move does come with an obligation for Swansea to buy his rights should the club gain promotion this season. Morris has an incentive to prove he can play in Europe, to maintain his place in the USMNT, and to reap a financial reward.

Morris is proof that there’s no fairly judging players on a single career choice. He’s proof that players can change and evolve and that presumptions about what is the “right” move should never trump a player’s own understanding of himself. That doesn’t mean that every choice made by every player is a good one and that they are above scrutiny. It’s that our ability to judge players depends on information that may not exist alongside an inability to know the future.

Swansea seems perfect for Morris. He’s a big enough name with a good enough reputation that Swansea fans will welcome him with open arms. The environment is high stakes but playing in the second division should aid in any adjustments.

Because Swansea City is set up to make a run at promotion, Morris can aid in the effort and rise to the Premier League in the process. For a player who many thought would spend his entire career in MLS, the move is a balanced approach. It also serves as a needed reminder that every player contains multitudes.

Soccer is just one part of the equation. There will always be players who choose the comfortable and familiar over the unknown. What’s important to remember is that even those players will grow and change. Like Morris moving to Swansea City, they can also develop the capacity to surprise.