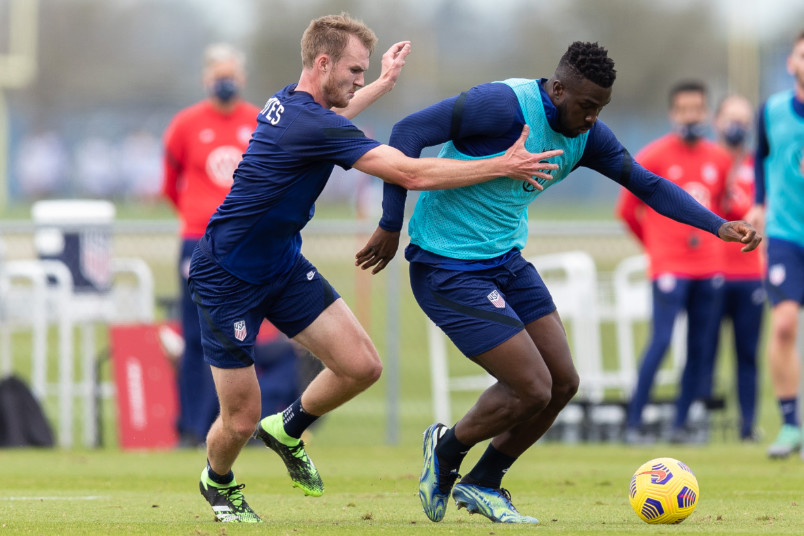 By Jason Davis – WASHINGTON, DC (Jan 20, 2021) US Soccer Players – Gregg Berhalter’s first USMNT camp of the new year now has a match to close it out. A mixed American squad will face off against Trinidad & Tobago on January 31 in Orlando. The game is the finale of an annual process that’s about talent identification and opportunity.

This year’s camp is also serving as a chance for U-23 head coach Jason Kreis to flesh out what his team will look like when the US heads to Guadalajara in March to attempt and qualify for this summer’s Olympic tournament. The uncertainty of the present moment, both for society and for soccer, is making that job more difficult. As an example, LA Galaxy defender Julian Araujo was originally included in the roster, only to pull out due to illness. He returned to the fold on Tuesday when FC Dallas defender Bryan Reynolds left due to personal reasons.

Due to the limited number of senior USMNT players in this group, the plan is to move a portion of the U23 group up to the senior squad to complete the team for the match against Trinidad & Tobago. That ensures that a lot of focus will be on the younger cadre of players, including many who have played for the United States in youth national teams. As is always the case in January, there is a group of players who are brand new to the program.

A few of those new faces are the product of college soccer. The growth of the MLS academy system in recent years and the arrival of those players in first teams, a phenomenon sped up by the COVID-19-affected schedule, has diminished college soccer’s influence as a talent producer. Still, as this USMNT group proves, there are good players coming out the system. Several of them are former MLS academy players whose matriculation into the collegiate game helped smooth out some of their rough edges or allowed them to grow into their talents.

New England defender Henry Kessler, a 22-year-old fresh off his first professional season, earned his chance with the USMNT after starring in Bruce Arena’s back line in 2020. Kessler’s name bounced around MLS circles as a candidate for Rookie of the Year, an award eliminated by MLS in the middle of the campaign, during one of the most difficult seasons on record. His steady play at center back for the Revolution solidified a problematic position for the club and enabled a deep run in the Eastern Conference playoffs.

Kessler’s arrival in MLS from the University of Virginia came after five years in the New York Red Bulls system and three years with a local club in his home state of Connecticut. Kessler was never highly touted outside of the NCAA recruiting world and never received a call up to a youth national team. His career is one of steady improvement. It’s a reminder that the newly “unconventional” path, once the only path available to American players, remains a legitimate option to reach the national team.

A former University of Virginia teammate, Daryl Dike, also earned his place in the USMNT plans. Dike’s was another name mentioned as a Rookie of the Year candidate in 2020. The Orlando City striker scored eight goals in 17 regular-season appearances and finished the year 11th in MLS in goals scored per 90 minutes. A dangerous combination of strength and speed, Dike showed a clinical eye for goal with the Lions and came in behind only fellow USMNT call-up Chris Mueller for goals scored.

Dike is something of a unicorn in the modern American soccer environment. Born and raised in Oklahoma, Dike did not make his mark at a celebrated academy but instead starred at the high school level in Edmond. His 70 goals in high school set a state record and led to his recruitment by Virginia.

He arrived in MLS as a Generation Adidas signing, a designation that meant much more before the academy boom. As with Kessler, Dike is proving that the high school-to-college path still exists for talented players coming out of parts of the country that lack high profile clubs or professional academies.

Dike’s rise to prominence, first in MLS and then with the USMNT, is partly a function of the national team’s lack of depth at striker. That’s not to suggest he can’t seize the moment, one he missed out on in November when an injury forced him to miss the USMNT’s game against El Salvador. It’s just the opposite. With 2021 set to be one of the busiest USMNT years on record, Dike is in prime position to play a meaningful part.

For a 20-year-old to be on the cusp of a national team breakthrough despite never playing in an MLS academy or featuring for a US Youth National Team is noteworthy in this current moment.

Kessler and Dike aren’t the only USMNT call-ups without previous experience in the US system. LAFC’s Tristan Blackmon, a college product and “late bloomer.” Mauricio Pineda, a Fire homegrown signing who played four years at the University of North Carolina. Benji Michel, another Orlando attacker who played college soccer at Portland.

American soccer is getting better at developing elite players. US Soccer is working to identify those players to better integrate them and in some cases, recruit them into the national team setup. That includes the ones that grew outside of the elite academy culture or took the path-less-trodden through college soccer.