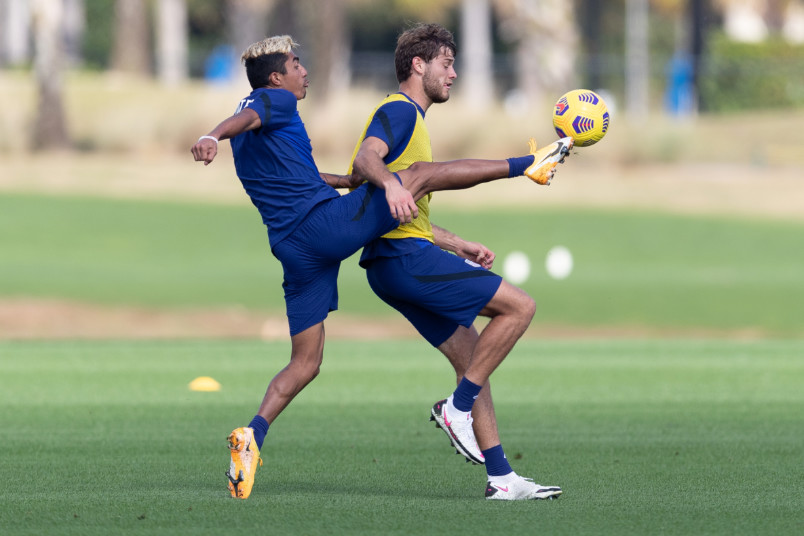 By Charles Boehm – WASHINGTON, DC (Jan 29, 2020) US Soccer Players – Ten players will seek their USMNT debut on Sunday night as a packed 2021 formally begins with a friendly vs Trinidad and Tobago at Exploria Stadium in Orlando (7pm ET – FS1). It marks the conclusion of January camp and the first of this year’s many meetings with regional opponents. The Concacaf Nations League, Gold Cup, and World Cup qualifying await in the months ahead. Here’s four topics to consider in the run-up to the start of 2021 for the USMNT.

This roster has three goalkeepers, Matt Freese, JT Marcinkowski and Matt Turner. No matter which one Gregg Berhalter picks as Sunday’s starter, it will mark their debut cap at senior international level.

Freese and Marcinkowski are Olympic-eligible Under-23s staking their claim for that team’s starting job. Turner is a late bloomer with a striking individual story. He didn’t dive into competitive soccer until his high-school years, overcoming the odds to become the New England Revolution’s starter in 2018. Turner has subsequently grown into one of MLS’s best shot-stoppers.

Playing in front of them is one of the strengths of the program. Aaron Long and Walker Zimmerman might have a strong claim to places in the starting lineup even when the entirety of the player pool is available. Miles Robinson is younger than they are but carries almost as strong a resume. He figures to be key to the Olympic side. Chicago Fire homegrown Mauricio Pineda is a newer arrival with a ‘tweener’ skill set that could yet land him in deep midfield.

“We had seven center backs in camp, and it was a really good mix of center backs with experience and youth and different qualities,” Berhalter said Monday after Henry Kessler, Aboubacar Keita, and Donovan Pines departed. “In terms of Mauricio and Miles, I think they had very solid camps, very consistent camps. And then with Walker and Aaron, we know exactly what we get with those guys. They give you leadership, they give you competitiveness and they have a good understanding of what we want to do on the field and off.”

The fullback group is shorter on experience, albeit with ample talent, particularly in terms of the attacking enterprise so valued in Berhalter’s system. This weekend looks like a great chance to impress for whoever earns minutes.

In the eyes of some tacticians, the difference between a 4-3-3 and a 4-2-3-1 formation is mostly an academic one. We have, however, seen some changes as the USMNT has generally trended towards that 4-2-3-1 under Berhalter. We’ve seen a dual pivot at the base of midfield here and there, as well as a single holder behind high-output dual number 8s, particularly in recent games where high pressing has been a focus.

Berhalter’s philosophy has some foundational principles, and accurate, wide-ranging distribution from holding midfielders is one of them. He clearly values the ability to shift the point of attack at pace. He also likes numerical advantages in the center of the park, protection for his backline, and midfielders who can time late-arriving runs into the opposition’s penalty box. How all these facets interact with one another is an ongoing subject of intrigue and analysis from camp to camp. The central-mid options available this week are a diverse and interesting grab bag.

Jackson Yueill is a cerebral distributor and deep-lying tempo-setter. New recruit Andres Perea is a rangy player with plenty of defensive skill. His Orlando City teammate Benji Michel is a speed merchant with a streak of flair who’s spent plenty of time on the flanks. Sebastian Lletget is a number 10 by mentality who’s capable of filling other roles for both club and country. Kellyn Acosta and Cristian Roldan can do a bit of everything. Newcomer Tanner Tessmann appears to be blossoming in a similar mold.

How Berhalter pieces together the team’s midfield on Sunday is anyone’s guess. Whatever the starting lineup looks like, expect at least one or two other different looks before the final whistle.

This has been a predominantly U-23 camp with a few senior exceptions, Jozy Altidore the most prominent among them. With 115 career caps, the 31-year-old striker has donned his country’s colors more than twice as many times as the rest of the forward line combined.

Multiple participants have spoken positively about the leadership and guidance he’s offered. On Sunday, we’ll hopefully learn more about what he’s able to provide on the pitch. Injuries have severely disrupted his career of late, so proving his fitness is job one, whether by the standard of a 90-minute contributor or an impact substitute.

In October Berhalter said Altidore is “probably still the most talented that we have in (the number 9) position, but he’s got fitness issues … he’s not fit to play 90 minutes, he’s not fit to play at the level we need him to. But he’s still an amazingly talented player.” The Trinidad and Tobago match is a data point for checking in on the status of that process.

Altidore can also leave a legacy in terms of the rising crops of young attackers coming up in his wake. With his play making abilities and tendencies to drift, FC Dallas’s Jesus Ferreira is less of an out-and-out front runner. Daryl Dike has played like Altidore’s spiritual heir over his first year as a professional. Both are just 20 years old and eager to learn and grow into this level.

“It’s truly a blessing being able to work with someone like him,” Dike said of Altidore on Thursday. “Phenomenal career, tons and tons and tons of experience. And it’s great because him and I, we play similarly. So he always has tips, he always takes time out of his training session or out of his day to go and tell me, ‘Hey, I think you can try this’… it’s really good to have someone like that, who’s been through it all, to be there to give you advice.”

More than three years have gone by since the road to Russia 2018 ended painfully on a soggy pitch in Couva, Trinidad. Though the two nations have since met in the 2019 Gold Cup, a 6-0 US win, the memory of that 2017 chapter in USMNT-T&T history isn’t going away anytime soon.

“We certainly always are going to have a chip on our shoulder whenever we play Trinidad,” Walker Zimmerman said in a media call on Thursday. “We got the chance to rectify that in Gold Cup, and we put on a really strong performance, it was very inspired and passionate. And so I think I expect nothing less from our group of guys on Sunday, I think we’ll be ready, motivated, for many reasons, and it’s always going to be a big game for us moving forward.”

T&T could be in for an even busier year than the USMNT. They’ve fallen outside of the top tier of Concacaf’s rankings, forcing them to navigate the opening round of 2022 qualifying. Starting in March, they must finish tops in a Group F that also includes the Bahamas, Guyana, Puerto Rico, and St Kitts and Nevis. Then they’d have to survive a two-legged playoff vs the Group A winners in order to earn a place in the final round, the “Octagonal,” the eight-team successor to the Hexagonal. Come summer, they’ll even have to go through a qualifying process for participation in the Gold Cup.

The Soca Warriors have called a young squad of their own for Sunday’s game, including four teenagers and a number of newcomers. With this match falling outside of international windows, neither side has its full spectrum of potential call-ups available. It’s still key for the visitors, who haven’t played a match in over a year.