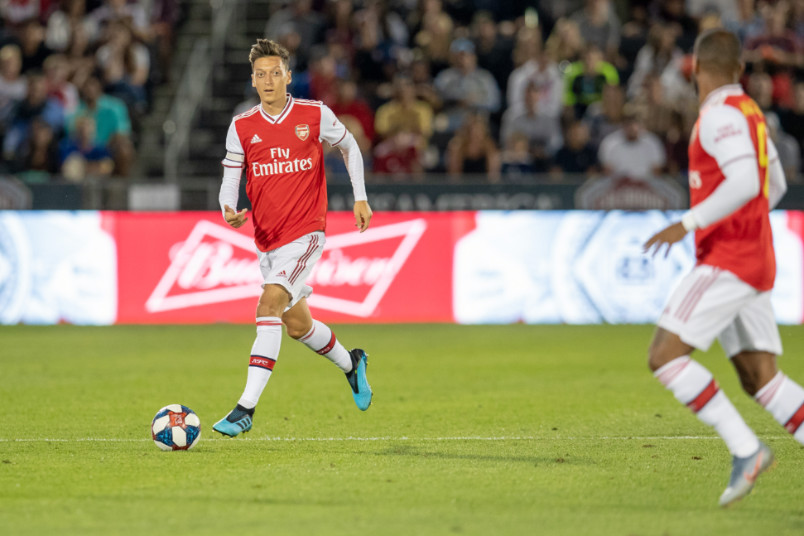 By Jason Davis – WASHINGTON, DC (Jan 13, 2021) US Soccer Players – Mesut Ozil added his name to an illustrious fraternity on Monday. The Germany international and erstwhile Arsenal midfielder took to Twitter to answer questions from fans. When asked what he might do when his contract with the Premier League club runs out, Ozil responded by saying that he’d like to play in the United States and Turkey before he retires. What he typed was “Turkey and USA,” specifying that by “Turkey” he means “Fenerbahce.”

That specificity may lessen the link to the United States and MLS, but it was enough to get an article on the league’s official site. The number of players who starred in European leagues over the years that expressed a desire to move to MLS is large. The number of superstars who actually signed is a much smaller group. Still, even though Major League Soccer’s status as a destination for a certain set of successful European players is well-established, some make waves by just mentioning the possibility.

Ozil’s comments on Monday seemed to hold more value in part because of a link to DC United that reemerged in December. Those reports may sound familiar since they included the same details from the original version. It’s soccer, where transfer rumors are a dime a dozen alongside “American near-retirement dream” statements.

Not playing at Arsenal complicates Ozil’s status as one of the highest-paid players in the Premier League. Arsenal has not used the attacking midfielder since March of 2020, something that directly leads to exit rumors. Ozil as a player in limbo makes him fascinating for reasons beyond his talent. It’s part of why any news about him or tweets from him get outsized attention. Now, at 32 and with the end of his time at Arsenal coming into sight, Ozil’s thoughts have turned beyond the biggest stages Europe has to offer for a different challenge.

Whether or not MLS should be that late-career destination for any player has posed problematic for the league. MLS commissioner Don Garber is famous for saying he wants MLS to be a “league of choice.” What preferences might be part of that turn of phrase aren’t necessarily clear. Not so long ago, MLS was competing with leagues in Australia and China for European superstars wanting a change. None of them necessarily wanted “retirement league” status, but the potential upside was too great to ignore. MLS might highlight greater investment across its rosters and the work of its academies, but there’s normally room for established stars.

Zlatan Ibrahimovich may have only been in the league briefly, but he left as one of the best attacking players in MLS history. That complicates the youth movement favored by some clubs. If anything, standout performances from older players shows that this is a league where the balance has to be right. Garber’s goal is malleable enough to work in several contexts. That MLS is still in a growth phase 25 years into its history is about all we can say about the effort.

MLS has made progress as a respected part of the world soccer community, but the barriers between it and elite status are beyond its ability to clear. Short of a dramatic rethink in the game’s landscape, MLS doesn’t have access to the most popular competition in the world, the UEFA Champions League. That means readjusting its scope.

There might always be a place for players like Ozil in MLS. The league can use the borrowed fame that those players bring, even as it moves into a new phase of its growth. It might matter more that some of South America’s brightest young talent also want to play in MLS, but as a stopover on the way to the European leagues players like Ozil consider leaving. Whether it’s a “league of choice” at the beginning of a career or at the end, MLS remains locked into the middle of a global hierarchy of leagues.

We’ll know that Europe’s hegemony is over and MLS truly is a “league of choice” for the best players in the world when quotes about their desire to play in the United States are no longer qualified. For Ozil, it was “before I retire,” an indeterminate time that could still be a few years into the future. For others, it’s “one day,” a phrase that implies something closer to retirement age than their prime years. If anything has changed in the 13 years since David Beckham made the move to MLS, it’s that we don’t get nearly as excited about the idea as we once did.

A certain type of American soccer fan might only pay attention if established players pop up in the league. For the rest, including fans the league is working to attract just by putting on a better brand of soccer, that may not matter as much right now. The current moment, coming off of a pandemic-impacted season with a labor negotiation underway, has something to do with that. So does the ever-changing nature of this league.