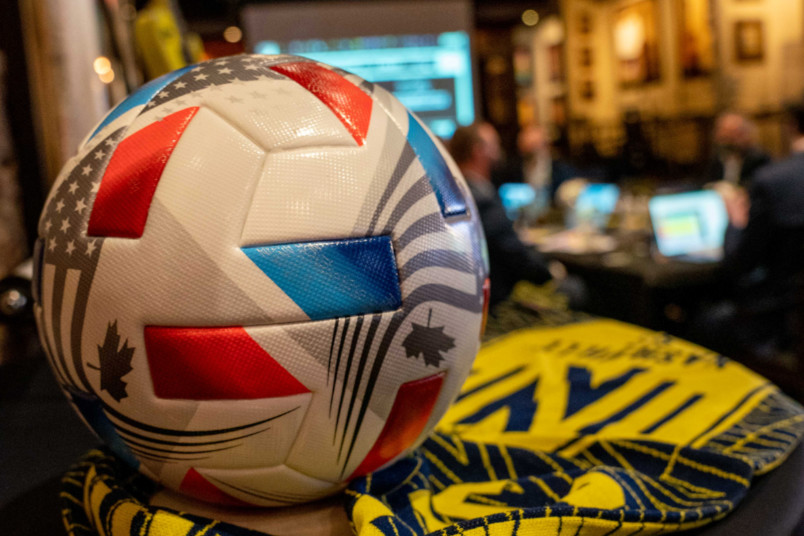 By Jason Davis – WASHINGTON, DC (Jan 22, 2021) US Soccer Players – For an event whose influence on Major League Soccer was already in steep decline before the outbreak of a global pandemic, the 2021 version of the MLS SuperDraft figures to be the least cared about in history. The trajectory of the league’s player development efforts and the timing of this year’s draft rob the exercise of the little cache it had left.

It’s easy to forget after the experience of the last 12 months that the 2020 SuperDraft marked the symbolic end of the event’s importance on the MLS calendar. Even before the pandemic forced everyone to work remotely, the league chose to turn the SuperDraft into an online event. Because of the drop in importance of the draft, the league could no longer justify the expense of the in-person event. As much as MLS liked the pomp-and-circumstance of the SuperDraft-as-television event and the “big time” feel it could convey, the juice was no longer worth the squeeze.

The SuperDraft didn’t decline in importance on its own. The league itself undermined it by working to build out an academy structure that would take the talent that previously followed the college path to the pro and putting them into professional environments earlier. When many of those players proved ready to move to the senior team before reaching college age, it robbed the collegiate game of players.

However, college soccer isn’t bereft of good players who can leap to the pros and MLS teams haven’t thrown in the towel on mining the university ranks. Even for those players who can work their way into the first team immediately, or for whom a year or more of seasoning at the pro level is necessary before they can rise to the first team, there are opportunities to grow. MLS clubs are using their reserve teams and affiliate relationships in the USL Championship and League One to stash college draftees not yet ready for the big stage.

All of that said, the numbers are not on the side of keeping the draft in its current form. Whether as a staged show or a virtual event, the draft feels more like an attempt to copy sports like football and basketball than an important part of the business of soccer. The SuperDraft gives the league’s pundits a chance to put on their best impression of the likes of Mel Kiper and Todd McShay, even though the players selected are unlikely to measure up to their contemporaries in the NFL.

The incongruity of MLS clubs pushing out social media posts welcoming players to the fold that might not make it through preseason camp is troubling. It’s not fair to the players in what feels like a life-changing moment achieved through years of hard work. The league’s choice to continue the charade during what is a hit-or-miss exercise deserves some scrutiny.

The 2021 edition the SuperDraft turned heavily on the impact of the pandemic. Six of the first seven selections and 12 of 27 picks in the first round were players from the ACC, one of the few conferences to play a significant number of games in the fall. The assumption before the 2020 college season was that many of those players would be high draft picks. Still, the limited scouting available to MLS clubs seemed to push them towards the ACC talent.

Understandably, that crowded out the other conferences. The start of the season is still in flux because of the on-going labor negotiations between MLS and the players association, a situation that might rob rising professionals of important training time ahead of their rookie seasons. Or, it could mean several players who missed out on the fall season because of the pandemic shutdown could stay with their schools for a rescheduled spring campaign.

This year’s draft also had more of an international flair than in the past. The increase of international players in America’s college soccer ranks comes from many programs aggressively recruiting overseas. Some of that is the quest to find the best players possible in the quest for a championship. Some of it is an effort to fill the void left by players choosing to sign with professional clubs rather than take college scholarships.

With this year’s top pick, Austin FC selected midfielder Daniel Pereira from Virginia Tech. Pereira will forever be part of club lore, regardless of how his professional soccer career turns out.

Austin FC fans have reason to trust that Pereira will be good enough to help their team in year one. The brain trust in Austin consists of Claudio Reyna and Josh Wolff, two players with experience playing in college, MLS, in foreign clubs, and with the USMNT. Gone are the days when it was a safe assumption that a number one overall draft pick would become an immediate starter. That doesn’t mean that Pereira can’t grow into an important role in Texas before the season is over.

One way to judge the efficacy of a draft in MLS’s modern era is by when the first club passes on a pick and ultimately how many clubs pass on picks in total through the three rounds. MLS cut the draft from four rounds to three for 2021 in an implicit admission that college soccer is waning in importance and that the pandemic would limit the player pool.

This year’s winner for the first team to pass was the Colorado Rapids, who chose not to make a selection with the 15th selection of Round 2 (42nd pick overall). No other club chose to pass in round 2, but a total of 10 teams did not make a selection in the third round. That means 12 percent of the draft went unused. Rather than pick a player with little chance to make the roster, clubs opted out. Apparently, it’s not even worth taking a chance on a player at this point.

Observers of the draft wonder when the day will come when a club will pass on their first-round pick. It may not happen next year or the year after that, but it does seem inevitable. That’s when MLS will have to reckon with the draft beyond the live event. Should it remain in place as a fairer mechanism to disburse college talent? Or should elite college players go on trial with interested clubs? That’s not a new question for Major League Soccer as they close in on having no choice but to provide a better answer than the SuperDraft.