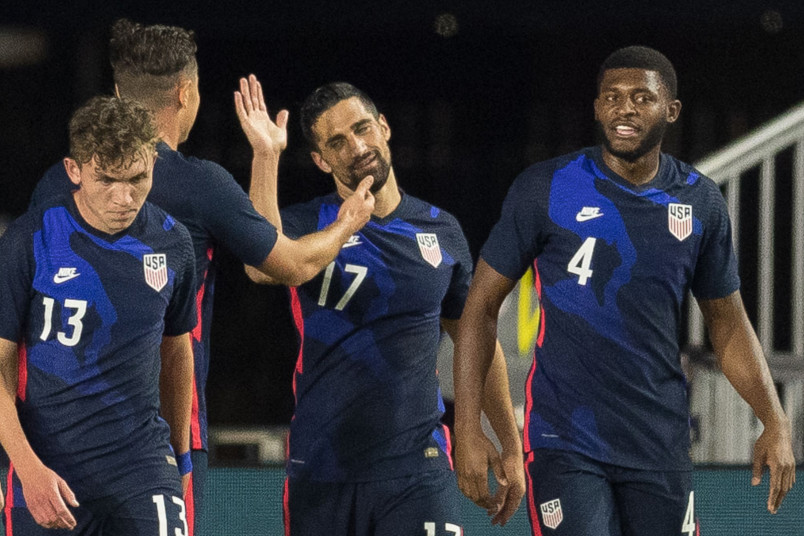 By Clemente Lisi – NEW YORK, NY (Jan 4, 2020) US Soccer Players – The start of the year brings with it a new set of challenges for the USMNT. 2020 largely grounded the National Team, allowing them to play just four games after the pandemic disrupted the soccer calendar and ultimately halted all sports. That means that 2021 is full of games and tournaments that could have a lasting impact on this program for years to come.

Aside from the friendlies the US will play this year, they will also be involved in this summer’s Concacaf Nations League and the Gold Cup before the start of World Cup Qualifying for Qatar 2020. The sample size of what took place last year is too small to glean much of anything. Still, it was a year that could set up coach Gregg Berhalter nicely for the next 12 months.

In four games, the USMNT won three and tied one. In its last two matches, the team racked up 12 goals against Concacaf opponents with two very different squads. That bodes well for the program heading into this year. More importantly, however, the rising stock of American players in Europe allows Berhalter to deepen his player pool after the USMNT went through an overhaul starting in 2018.

“We’ve never had this much talent before,” Berhalter told Jim Rome on CBS Sports Radio. “When I look at this roster, it’s young talent. So we have players under the age of 23 that are really, really good.”

Weston McKennie, who signed with Juventus this season and recently won US Soccer’s Male Player of the Year award, Chelsea’s Christian Pulisic, and Barcelona’s Sergino Dest have all had strong showings for their clubs so far this season. These players will be looking to carry that level of performance for some of the biggest clubs in world soccer into the National Team.

The success doesn’t end there for Americans playing abroad. Over in Germany, where Americans have had the most success in recent years, Gio Reyna at Borussia Dortmund is another player who can parlay club success into National Team stardom. It’s a similar scenario for fellow Bundesliga players Josh Sargent at Werder Bremen and Tyler Adams at RB Leipzig.

The list, of course, goes beyond even these notable names. The beauty of this new year is that even more players could emerge and make the USMNT call-up list, especially with such a crowded fixture calendar in 2021.

There’s no doubt that MLS teams love their foreign-born Designated Players, but the league as a whole does seem to be doubling down on Academy players and young stars to help grow the game. MLS has come a long way in 25 years and remains poised to generate the type of talent that this country has never seen before. This past season was another great example of how teenage stars can break into the league. These emerging talents aren’t limited to the LA Galaxy, FC Dallas, or the New York Red Bulls. Teams across the league like the Philadelphia Union are investing in youth players. That’s a great thing for the league and the USMNT.

Many of these MLS players with some National Team caps sign with European clubs, like FC Dallas’s Reggie Cannon did last year. Brenden Aaronson’s breakout season with the Union triggered a move to RB Leipzig. That helps to deepen Berhalter’s player pool. Others to keep watch on are Galaxy defender Julian Araujo and Toronto FC’s Ayo Akinola. Making sure these players continue to prosper and get minutes with the USMNT this season will be a necessary step in rewarding players who do well in MLS. That’s vital if the US wants to stay competitive in international competition and take on Mexico as the region’s top team.

Where do the veterans fit in

There is much hype, a very justified one, around young players. So what about the veterans? In 2017, several established players retired, goalkeeper Tim Howard and striker Clint Dempsey to name just two, that left the team in need of experience. In this era, World Cup experience is a rarity with the squad trending young. The team’s new leaders now have a chance to emerge over competitive games. That leadership should show this summer and become a difference-maker as World Cup qualifying takes over the schedule.

With regard to being the best team in Concacaf, this year there will be two tournaments that will put that to the test. The Nations League, the debut edition that was postponed last year due to the coronavirus, will provide the US with a first real test in 2021. The tournament, scheduled for June, features the US taking on Honduras, while Mexico plays Costa Rica. The winners will meet in the final on a date and venue to be determined. For the US, it’s a chance to play for a trophy prior to the Gold Cup and potentially against old rivals Mexico.

The final round, now featuring eight teams, starts in September. The compact schedule, a result of the pandemic, will put increased demands on players. The September and October windows have three games each, with the USMNT staff waiting on round two to conclude before knowing all of their opponents. This is where a deep player pool is helpful. The top three teams qualify for the 2022 World Cup. The 4th-placed team will contest the FIFA Intercontinental Playoff, scheduled for June 2022. Any success the US hopes to have in 2022 will largely depend on how they do this year.