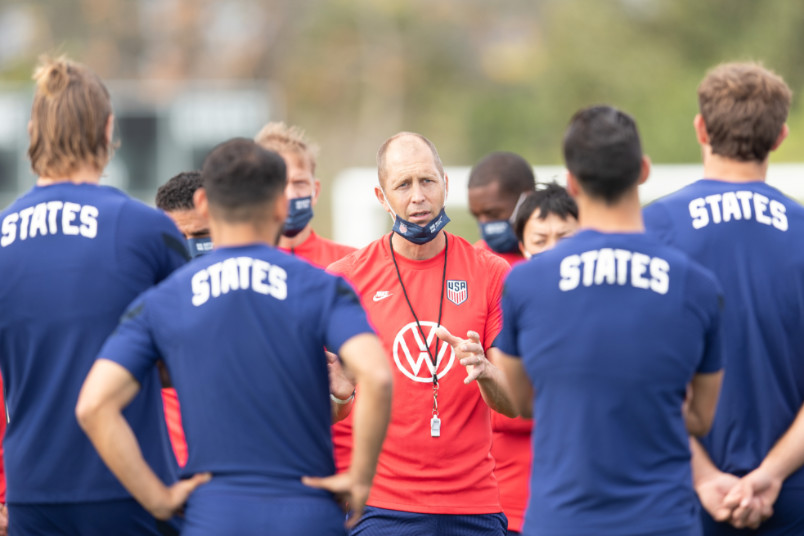 By Jason Davis – WASHINGTON, DC (Jan 29, 2021) US Soccer Players – USMNT head coach Gregg Berhalter does not skimp on preparation. In that way, Berhalter is very much the modern soccer coach. For Berhalter, putting his team in the best position to win means using every tool available. Video review, analytics, advanced scouting, fitness testing, the works.

How to leverage those tools in the USMNT environment is still something of an unknown. The international game mostly turns on the median talent level in the player pool. There are ways to gain an advantage through careful preparation. Player selection and tactics obviously matter. Still, there’s only so much a coach who sees his players once every few months can do to make them better as a group.

Nevertheless, Berhalter will face scrutiny if he doesn’t reach new heights with the USMNT thanks to the arrival of several high-profile young players in the team. Relative to the entire history of the USMNT, Berhalter possesses an embarrassment of riches.

The amount of talent at his disposal means Berhalter’s team can no longer position itself as a plucky underdog, working to more than the sum of its parts. The parts are elite, boasting starting roles in clubs like Juventus, Barcelona, Borussia Dortmund, and Chelsea. The output must match that standard.

2021 will test the Americans. With 2020 a lost year because of the COVID-19 pandemic and the cancellation of all but a few friendlies, Berhalter has to prepare his team for the Nations League, the Gold Cup, and World Cup qualifiers without the benefit of time. Following the failure to qualify for the 2018 World Cup, the USMNT won’t get the benefit of the doubt from fans or media.

Not that Berhalter is alone. The circumstances are different, as are the expectations, but Trinidad & Tobago arrives in Orlando for Sunday’s friendly in their own set of difficult straits. Considering the turmoil that hit the T&T federation in 2020, it’s fair to say the Soca Warriors have more baggage than any team in the region. Their schedule is even more intense than the Americans’ because of their place in the Concacaf pecking order.

FIFA suspended the Trinidad & Tobago Football Association in late September of 2020 for violations of the body’s rules regarding government intervention in association business. The mess stemmed from FIFA’s attempt to appoint a committee to oversee an overhaul of the federation following allegations of financial irregularities. The deposed leadership took FIFA to court, triggering the suspension.

With the suit withdrawn. FIFA reinstated Trinidad & Tobago in time for Concacaf’s Gold Cup qualifying round draw in December. Because of its finish in the inaugural edition of the Nations League where they exited in the group stage, the Soca Warriors must win two games in July to make the field. Those games are almost an afterthought for the team with its World Cup qualifying campaign beginning in March.

Here’s how difficult the situation is for T&T. Head coach Terry Fenwick took charge of the program in December of 2019 but Sunday’s match will be his first as head coach.

Berhalter’s USMNT is practically rich with time compared to T&T. The culmination of the January camp in Florida is a chance for new talent. It’s also a checkup on veterans who missed out on any of the limited 2020 camps. Then there’s sorting out some of the US team for the Olympic qualifying tournament schedule for March for the United States.

For Trinidad & Tobago, the game is a crucial building block ahead of March’s massive matches. T&T made the final round of World Cup qualifying for 2018. They finished last in the Hex with a lone but famous win over the United States.

To make the newly created “Octagonal” and earn a chance to qualify for 2022, the Soca Warriors will need to finish first in a group of five from Central America and the Caribbean. Then they’ll need to win a two-legged affair against another first-round group stage winner.

It’s a difficult task even at the typical canter of World Cup qualifying. In the post-COVID environment, it becomes a wind sprint through games in the March and June international windows. If T&T has designs on reaching the Gold Cup and then making some noise once it gets there, that further complicates the effort. If instead, Fenwick chooses to effectively punt on the regional championship to better focus on the World Cup effort, few will fault him.

Like Berhalter, Fenwick won’t have his best squad for the Orlando friendly. Worse, he won’t even have his US-based players. MLS players Joevin Jones and Kevin Molino aren’t in the squad. That leaves Fenwick with players who have little or no international experience. Sunday will help him deepen the player pool, but it’s difficult to see any of the new names playing significant roles in the country’s important games in 2021. This roster and this game appear to be about the future when T&T’s focus has to be squarely on the present.

T&T arrived in Orlando with a handful of island-based players included in the roster after what amounted to a national team tryout. The quest for talent, any talent, forces Fenwick to leave no stone unturned. What should have happened in 2020 didn’t but through no fault of Trinidad & Tobago. Everything will now happen at a breakneck speed.

Available resources make Berhalter’s job much easier than Fenwick’s, though there is plenty to sort out ahead of the lone international window available to him before the country’s competitive schedule begins. The USMNT faces the same questions as Fenwick about the Gold Cup, without the pressure of qualifiers coming before that tournament. The United States is also targeting a run at the Olympics, hence the mixed group called in for January’s camp, and could tap some of its leading senior team players for help in that cause.

There’s never been a year like 2020 in soccer’s modern history. 2021 looks poised to be its own unique beast, but one that flips the calm of a year stolen by the pandemic on its head, delivering a torrent of games that will stress everyone involved. We probably won’t learn much about either nation’s ability to handle the challenge when they face off in Orlando on Sunday, but it does represent the beginning of the madness.