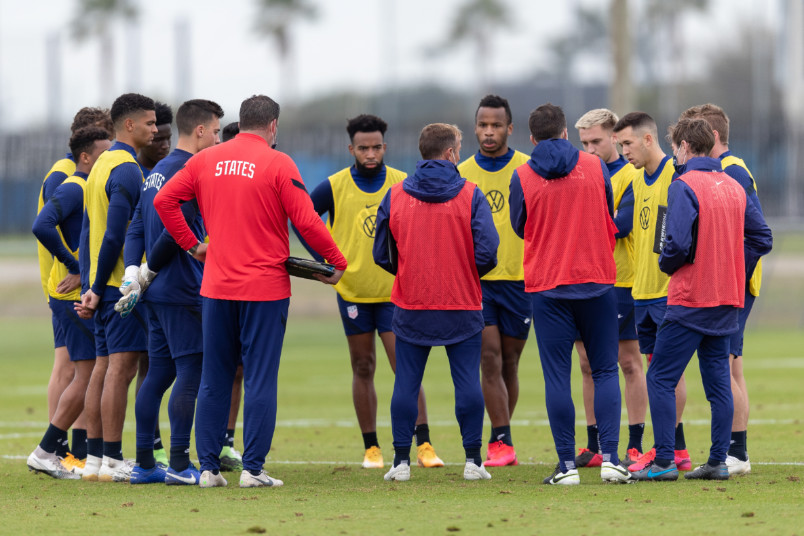 By Charles Boehm – WASHINGTON, DC (Jan 15, 2021) US Soccer Players – After a year’s delay imposed by COVID-19, the details became official this week. The USMNT Under-23 squad travels to Guadalajara in late March for Concacaf Olympic qualifying, hopeful of plotting a course to the Summer Games for the first time since 2008.

Coach Jason Kreis was already on site at Guadalajara at the same time last year, working through the final stages of their preparation before the reality of the pandemic rolled in and forced a sudden stoppage. Everyone knows about the lockdowns, distancing, and gnawing uncertainty that followed.

A partial return to a modicum of normalcy in recent months has allowed Kreis and his staff to get to work. The U-23s are currently training alongside the senior USMNT in Florida. The chaotic 2020 vibes linger, though. MLS’s COVID and collective bargaining concerns have thrown the timing of the upcoming season into doubt and with it perhaps the potential club games that count for his domestic-based players prior to Olympic qualifying.

“It’s a really interesting situation,” Kreis told reporters in a conference call this week. “It feels like with this qualification process, it’s been one challenge after another, seems like there’s been one hurdle laid in front of us after another. And we just continue to step over them, so we’ll do the same with this.”

Some reports suggest that the MLS campaign might even be delayed to May, in which case Kreis and his staff would scramble to fill the gap with additional camp time. It’s another unwelcome variable in an always-treacherous Olympic process, where FIFA policies on player releases make it difficult just to field a full-strength lineup.

“You look at the preseason situation,” noted Kreis, “and if you take a negative viewpoint of it, you say, man, I’d really like my players to have played four or five games, have a full, proper preseason with their MLS team so they can roll that into qualification and those guys are maybe a little bit better in form. But from the other point of view, if that’s the case, and your MLS season started, now maybe there’s a couple MLS clubs that don’t want to release their players. So if we take a positive viewpoint of it, we say OK, if the MLS season hasn’t started, now there doesn’t seem to be any good reason for any MLS clubs to not release all of their players to us. So we think potentially we have a bigger pool to choose from.”

The current U-23 cycle stands to benefit significantly from the youth movement taking root across MLS and the wider renaissance of American talent that’s interwoven with it. More Olympic-eligible players are earning regular first team minutes, both at home and abroad, than in the past. One silver lining of the pandemic postponement is that the 1997 age cutoff remains in place, effectively making this a U-24 event.

“If we look back a few cycles, maybe even one cycle,” noted Kreis, “you’d be calling in players into the camp that weren’t playing minutes for their club. And so oftentimes, you’re now trying to work with and really leaning on players that maybe are perhaps not at their best. They’re not in form, so to speak, they’re not even soccer fit, because all they’re doing is training and not playing matches. And so now I think we’re reaching the next level where these guys are actually getting meaningful minutes with their first teams and playing matches and look match ready.”

In keeping with the current zeitgeist, there’s also a catch to all that. European clubs tend to deny Olympic call-ups, which are not mandatory releases for FIFA. Now, after being generally amenable to such releases for many years, some MLS clubs may follow suit, because their U-23 US talents are more likely to be important contributors than they once were.

“Different clubs in MLS have different needs or concerns, where they’re at their season,” he added. “Last year we ran into some stuff with Concacaf Champions League, I think maybe there’s still a little bit of that possibility for this year, actually. So we have to have those conversations on a case by case basis, kind of see where their club is with their philosophy and how they view it. And of course, every club has different motivations and different ways that they look at national team exposure, especially youth national team exposure.”

Even an unsuccessful Olympic campaign can be valuable for the individual players involved. It’s a microcosm of the World Cup journey. It’s also a shop window in which to draw the attention of European club scouts. That can eventually benefit their current club, too. Now Kreis just has to convince them of that.

When the action finally gets going on the field, the US U-23s will face a different sort of route to the tournament final, whose two participants will take the region’s two spots in Tokyo. The US and Mexico tend to be the top seeds in the eight-team event, a format in which they wouldn’t have to face one another until the final if the bracket goes chalk.

This time, though, Honduras moved ahead of the US in seeding rankings. So Kreis’ team will have to meet El Tri in the group stage, along with Costa Rica and the Dominican Republic. That’s a rugged Group A outlook. To look on the bright side, surviving that test would head off the daunting specter of a win-or-else semifinal meeting with the Mexicans or Ticos.

Kreis sounds committed to an optimistic outlook as he leads his squad on this voyage. It should come in handy during the storms to come.