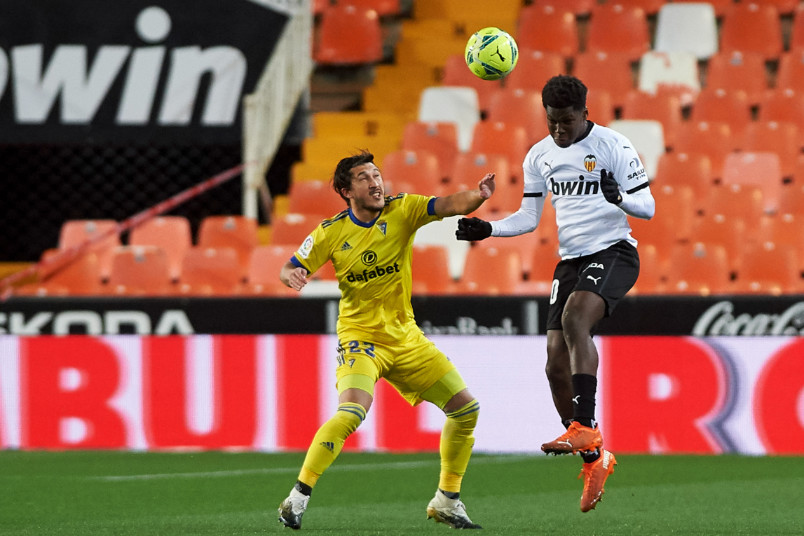 Tuesday’s soccer news starts in La Liga. Yunus Musah subbed out in the 64th minute of Valencia’s 1-1 home draw with Cadiz. Trailing from the 58th minute, Maxi Gomez equalized in the 79th. The point has Valencia in 17th-place, tied on 16 points with 18th-place Elche. Unfortunately for Valencia, Elche has two games in hand.

“The current situation is that we have to get out of the bottom positions in the table,” Valencia coach Javi Gracia said. “When we do that, it will allow us to see how far this team can go. At the moment, we have enough on our hands with winning a game. Then we need to win two.”

Valencia is far from the only team trying to figure out this season in Spain’s topflight. Real Madrid has turned its season around by finding a way not to lose, but they still trail local rivals Atletico Madrid by two points at the top of the table. Atletico also has two games in hand, with the unbalanced schedule distorting the picture. Barcelona is in 5th, undefeated since they lost at Cadiz on December 5, but drawing twice over their last four games. That includes at home to Valencia on December 19.

With the giants underperforming, there are more points available to teams that would otherwise write those games off. There’s no shame in playing for fourth or fifth in a league with Barcelona and the two Madrid teams. The change in form this season now suggests there’s more to play for up and down the table. That may be catching Valencia in transition, compounding what would otherwise be a mid-table season.

“There is a list of priorities in accordance with the financial possibilities the club have,” Garcia said about the January window. “It will be the club who decide which players are brought in. My responsibility is not to decide who will come here. I want players to come here to help us. I am never going to say no to any player.”

What Valencia has is an obvious problem. They’ve given up 25 goals to 23 scored. Correcting the defensive issues should be enough to solve the relegation problem. Whether or not that’s possible without bringing players in is the question.

In what we all hope is a unique situation, significant transfer business during this window isn’t a given. The threat of the pandemic disrupting the schedule remains. Club finances are all over the place across Europe. That includes the willingness to spend from the big clubs that drives the market from the top. Further down, it’s a situation where there simply may not be as many opportunities to improve a squad right now.

Staying with the soccer scores, Andrija Novakovich subbed on in the 79th minute of Frosinone’s 2-1 home loss to SPAL in Serie B. Frosinone took the lead in the 25th minute from a Grigoris Kastanos goal. SPAL equalized in the 40th and went ahead for good in the 87th. In the 2.Bundesliga, Alfredo Morales’s Fortuna Dusseldorf beat Paderborn 2-1 at home. Kristoffer Peterson scored in the 22nd minute and Kenan Karaman doubled Fortuna’s lead in the 55th. Paderborn pulled a goal back in the 79th minute.

Hear about the tryouts happening tonight on@FortWaynesNBC. Plus, more on this conversation with DaMarcus Thursday at 11. ⚽️ #Soccer #FortWayne #USL @USL_HQ pic.twitter.com/F21SPgryjC