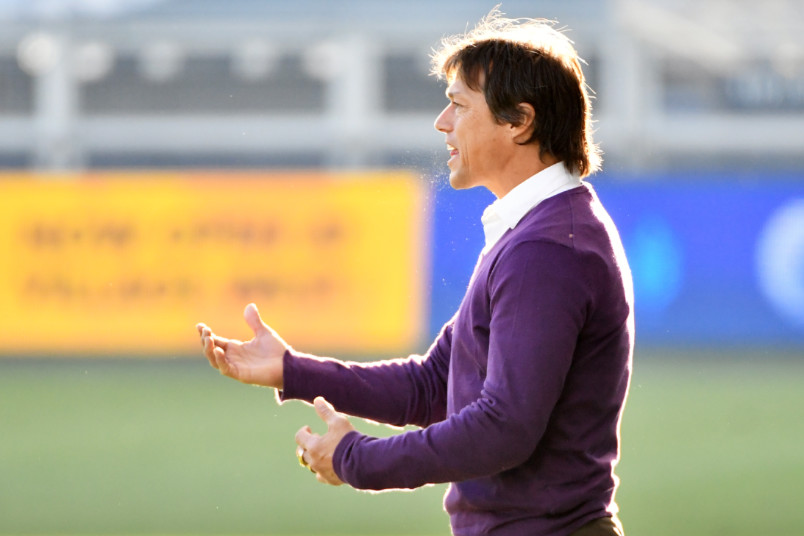 By Clemente Lisi – NEW YORK, NY (Feb 15, 2021) US Soccer Players – Hernan Losada is like a lot of South American players. He started his playing career in his native Argentina with Independiente. Within a few years of his 2003 debut, the attacking midfielder was playing in Europe. Over the next decade, Losada was with several clubs, including Anderlecht and Beerschot in Belgium.

Losada retired in 2018 and a year later became coach of Beerschot. Last month, he left that job to become the new head coach of DC United. For Losada, he has the double challenge of leading DC United in the post-Ben Olsen era and trying to adapt to the style and culture of American soccer.

“I believe in playing every match to win and in my opinion the best way to do this is to create as many scoring chances as possible every time we step onto the field, through high-energy, vertical attacking soccer,” said Losada, who at age 38 will be the youngest coach in MLS this season. “I am looking forward to entertaining our fans and competing.”

Following an influx of Argentine players in MLS over the past decade, Losada is one of three coaches from that nation out to prove their value in MLS this coming season. Losada joins Gabriel Heinze at Atlanta United FC in what will be his first season and Matias Almeyda, who has been in charge at the San Jose Earthquakes since 2018.

Overall, there are only five South American coaches in MLS out of 27 with Oscar Pareja, a native of Colombia, at his second season at Orlando City SC, and Giovanni Savarese, of Venezuela, who is preparing for his fourth season with the Portland Timbers. Nine hail from Europe, with 13 Americans and one Canadian rounding out the group. Foreign-born coaches have had limited success in MLS over the years, but that’s not stopping MLS teams from taking a chance.

Almeyda is a perfect example. A veteran of two World Cup with Argentina, Almeyda played in Europe, most notably in Italy with Lazio and Parma, retiring from playing in 2011. He returned home and coached River Plate and Banfield before arriving at Liga MX side Chivas in 2015. In San Jose, Almeyda has two seasons under his belt. In 2019, the team missed the playoffs. Last season, they were eliminated in the first round by Sporting Kansas City via a penalty shootout.

There’s a lot both Losada and Heinze can learn from Almeyda’s experience. Despite a mixed record, rumors linked him with the Chile job. Almeyda acknowledged last week that he was planning to stay in MLS and honor his contract, which calls on him to stay at San Jose through
2022.

“I’m satisfied because we gave even more than we had in us. I was happy to see how the players tried everything,” he told reporters via video conference following last season’s playoff elimination. “From about (mid-September) they have been playing good football. At the same time, I’m left with the emptiness that it was hard to give any more. We fought with everything we’ve got.”

The most successful Argentine coach in MLS is Geraldo “Tata” Martino, who took over Mexico after guiding Atlanta to the 2018 MLS Cup. South American coaches going to Mexico is nothing new. A prolonged time at a single club is often a measure of great success, although MLS may not be in that position. Coaches, even in Europe, often move around. Should Losada fail at DC United, he could be out after one season. Should he succeed, that could draw the attention of other clubs or national teams in the region.

Heinze takes over the reins at Atlanta after a transitional season. A former left back, Heinze represented Argentine at two World Cups and played for European clubs such as Manchester United and Real Madrid. As Atlanta’s coach, Heinze will try to impose his soccer philosophy on MLS.

Heinze said, “my football philosophy is aligned with the vision of the club.” That should mean a 3-4-3 with buildup from the back like we saw in his past coaching gig at Argentine club Velez Sarsfield. That will make Atlanta an offensive threat this coming season. It is a philosophy that prioritizes entertaining, South American-style soccer that is fun to watch. His arrival could also help Atlanta sign more Latin American players like Martino did during his tenure.

“Since we launched Atlanta United, our objective has been clear to play an aggressive, attack-minded style of play,” technical director Carlos Bocanegra said in a news release last December. “Gabriel fits that mold and has a dynamic playing style that aligns with the identity of our club, which is what we were specifically looking for in our next head coach. We’re excited to get him into Atlanta and to get to work on a promising 2021 season.”

MLS, however, remains Euro-centric when it comes to coaching. We already know that success changes things. That started with Tata Martino and now could become a trend should this trio succeed in 2021.