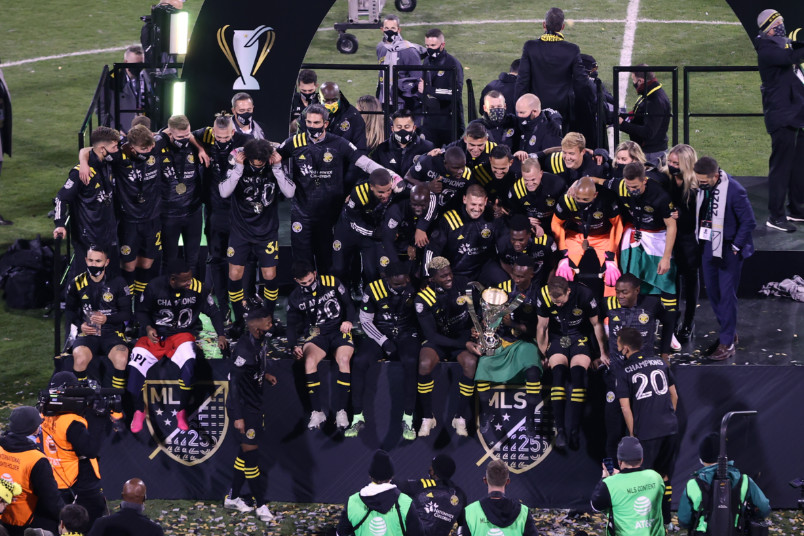 By Clemente Lisi – NEW YORK, NY (Feb 22, 2021) US Soccer Players – It’s one of those sports truisms that defending a title is usually harder than winning one. In Major League Soccer, it remains more than an adage. Throughout 25 seasons, only three teams have won two consecutive MLS Cups. That should mean that the defending 2020 champions Columbus has a difficult season ahead of them.

Having made that point doesn’t mean the Crew can’t repeat. They have a great coach in Caleb Porter, a solid backline, and plenty of offensive weapons. The blueprint for how to do it could lie with some of those past repeat champions. Those three back-to-back title winners are DC United (1996 and ’97), the Houston Dynamo (2006 and ’07), and the Los Angeles Galaxy (2011 and’ 12).

All three of these teams had exceptional coaching. Bruce Arena coached both DC United and those Galaxy sides. Add in the obvious with strong defenses and decisive offensive options. Columbus has more, playing in a new stadium this coming season. That’s only going to increase the excitement in the dressing room and the fan base. It’s a credit to their investor/operators and the city that fought to keep them.

The Crew got stronger this winter in so many ways. For starters, they took advantage of the league’s free agency rules to gobble up marquee players and create roster depth despite no arrival of a big-name foreign player. The signings of midfielder Perry Kitchen and strikers Bradley Wright-Phillips and Kevin Molino make the Crew a favorite. How can Columbus repeat? Here are three things to consider.

Players are important for any team, but managing the schedule is key. The MLS season, interspersed with the Concacaf Champions League and US Open Cup, can be extremely tricky. Beefing up the roster will go a long way in remaining competitive on all three fronts.

How to weigh the Champions League is an annual question. Toronto FC made it to the final in 2018 as the defending MLS champions. That title defense hit the rocks early, with Toronto ending up in 9th-place and missing the playoffs. With that still in mind, Porter will need to assess how much energy and resources to spend on this competition.

Asked about the Champions League during a conference call on February 11, Porter said, “It’s a challenge to face the level of competition that we will face, to manage, obviously, the compacted season with our regular season fixtures.”

The Crew officially open their season on the road in the Champions League, taking on Real Esteli of Nicaragua on April 8 to open the round of 16. The second-leg is on April 15 in Columbus. The MLS season starts two days later.

This is where the Crew can look at some positives. The team has been tremendously busy this winter. Creating more depth to the roster will make it easier for Porter to rotate players and juggle lineups depending on the opponent and rise of injuries, which often plague teams over the summer and later in the season as the playoffs approach.

Joining Gyasi Zardes in attack will be wingers Wright-Phillips and Molino. This trio, barring injuries or pandemic issues, could be the most formidable of any team in the league. Expect them to light up scoreboards across the league, jockeying for the top spot when it comes to goals and assists.

Wright-Phillips, for example, is the sixth all-time leading scorer in MLS history. He also has other accolades to his name, a three-time MLS Supporters’ Shield winner, two-time MLS Golden Boot winner, and twice selected to the MLS Best XI.

Veterans are important, but so are young players. Last season, the team found in Aidan Morris an exceptional young talent. Only 19, Morris was announced as a Homegrown Player signing in January 2020 and made his debut in the MLS is Back tournament. Morris became the youngest player in league history to start in an MLS Cup Final, after Nagbe missed the game out due to pandemic protocols.

This season, the team’s best young hope is 20-year-old midfielder Isaiah Parente out of Wake Forest. Parente had spent time with the Crew Academy before enrolling in college. The team was also active at the recent SuperDraft, picking up two defenders, Justin Malou from Clemson and Joshua Jackson-Ketchup from Ohio State.

“We are thrilled that Isaiah has earned a first team opportunity and are pleased to have Isaiah return home to Ohio,” Crew GM Tim Bezbatchenko said in a news release. “Isaiah’s time at Wake Forest was very successful and we’re thrilled to have yet another Crew SC Academy player join the Crew SC First Team.… Over the last several years, our Academy has continued to provide a pathway to the professional ranks as we cultivate top youth talent in the state and the region. We look forward to working with Isaiah and see him continue his development.”

Columbus has the tools to repeat, but MLS remains one of the world’s most unpredictable leagues. That unpredictable nature could very well get into the way of another title. If anybody can navigate those obstacles, it’s Porter and his players.