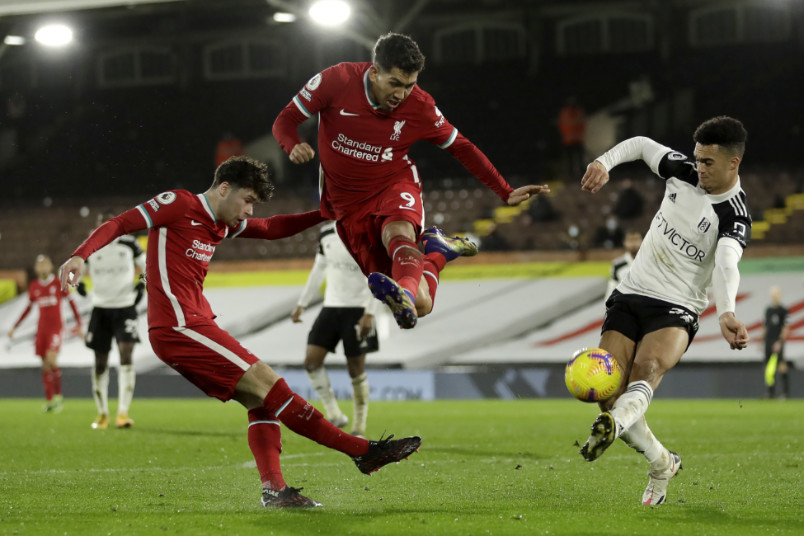 By J Hutcherson (Feb 16, 2021) US Soccer Players – The 2020-21 Premier League season is asking a lot of questions without a lot of answers. Whether or not the newly discovered parity in England’s topflight is something that will last once things return to normal is probably at the top of that list. The Manchester clubs at the top of the table are part of that story, but it’s more about Leicester City and West Ham in the top five. Then there’s the lower half of the table where we find Fulham trying to play itself out of the relegation zone.

After 23 games, Fulham has 18 points in 18th-place, seven points behind 17th-place Newcastle with a game in hand over them as well as the two teams behind them. Because this is the season of upsets, real and imagined, Fulham is coming off of a 2-0 win at 7th-place Everton and a scoreless draw at West Ham.

This is the latest version of Fulham seemingly punching above their weight. Last month over back-to-back London derbies drew 1-1 at Spurs and lost 1-0 at home to Chelsea after playing the second-half a man down. They led Manchester United at home before losing 2-1. Whatever the table says about Fulham’s form, they play like a club that should be middle of the table in normal circumstances.

Fulham’s problem is the same as the league as a whole. The week-to-week reshuffling of form limits what any of us know about any of these teams. Liverpool’s disastrous title defense hit a crescendo over the weekend with manager Jurgen Klopp saying it was already over. Manchester City’s manager Pep Guardiola disagreed and for the obvious reason. Anybody paying attention knows all of these teams can slip week-to-week. Pep’s City wasn’t exactly lighting up the league over the first-half of the season.

After beating Fulham 2-0 at home on December 5, they drew 0-0 in the Manchester derby and then 1-1 at home with West Brom. An 11 game win streak may seal the title, but City’s technical staff likely knows better than most how strange this season has already been. Until the start of that win streak in mid-December, City had won four out of 12 games, drawing five. Meanwhile, Manchester United was getting the plaudits for chasing down Liverpool at the top of the table in a season where they lost three of their opening six games.

It’s simple enough to look at the remaining games on any Premier League club’s schedule and see possibilities only limited by the available points. That isn’t necessarily producing the kind of parity where spending simply no longer creates enough of an advantage. It’s also not showing us a risk vs reward meritocracy. Instead, it’s some odd confluence of situations where form can become illusory every time the opening whistle sounds.

At Premier League level, it’s almost funny when a big club’s manager speaking after yet another win overplays the next opponent. “Now we’re looking to that crucial next fixture with…” and we all laugh along at the idea that it’s much of a challenge. Except now it probably is worth the mention, worth the kind of expectation management normally reserved for bigger games.

From December 13 through January 13, Fulham drew all five of its games. That run of taking a point started with Liverpool and finished at Spurs. In between was Brighton, Newcastle, and Southampton. For a team that hadn’t won a game before last weekend since beating Leicester 2-1 away on November 30, it’s tough to figure Fulham out. Yes, 3rd-place Leicester with contender status not exactly telling us much this season.

After winning 2-0 at QPR in the FA Cup last month, Fulham exited at home 3-0 to Burnley in the Fourth Round. They play 16th-place Burnley in the league on Wednesday separated by eight points. Keep in mind that we’re talking about a team most concerned about keeping that gulf between them and the relegation zone.

In 2021, Burnley has beaten Liverpool and an Aston Villa club in the top ten. Their only other win this year was at Crystal Palace last Saturday. Burnley ended November with a 5-0 loss at Manchester City. They drew with Everton to start December, finishing their six games that month with wins over Arsenal, Wolves, and Sheffield United, drawing at Aston Villa, and losing to Leeds. Like so many clubs right now, that’s not a form chart. It’s a kid playing with the difficulty settings in a video game. What that’s created is no situation where a team in this league should play down its chances.

“The other night, was there a big difference in performance? Not really,” Fulham head coach Scott Parker said. “Granted, I thought we played very, very well, but we’ve played very well over the last run of 14 games. We’ve had four defeats out of that, and those four defeats came against the top four in the division. We’ve been very, very competitive, we’ve played very, very good football…. But it’s fair to say belief, confidence, is there. You don’t perform like we’ve performed if confidence isn’t there, and there’s still a lot of football to be played.”

It’s also fair to ask what that confidence means this season. Taking a look at the specifics for any club probably won’t reflect their position in the table. There’s enough in what too many have already done this season to suggest more. That won’t keep good teams from ending up in difficult situations. In this season where we might not know what good even means, that counts exactly as much as a club decides it should.