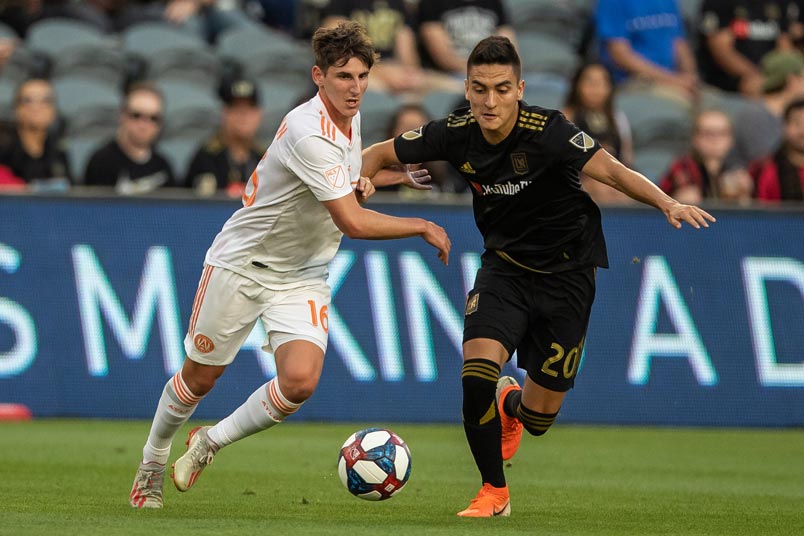 By J Hutcherson (Feb 23, 2021) US Soccer Players – For a league like MLS so dedicated to a specific idea of parity, it’s interesting how often the conferences refuse to cooperate. It’s close to an annual tradition that one conference outdoes the other.

In 2018, the Western Conference champion was up to 3rd in the Eastern Conference table with other Western teams filling in slots four through six in a single table. Closer to parity and less than a ten-point gab between the conference champions. A rampant 2019 season from LAFC changed the Western Conference. Sixteen points separated LAFC from 2nd-place Seattle, but that still had the Sounders 4th in the single table. Conference disparity seemed to be less of an issue moving into last season, something that stresses quick run-ups to competitiveness for expansion teams.

Last season, the league made the interesting choice to put Nashville in the Western Conference. That ability to ignore geography is nothing new in American pro sports, with MLS wanting to split the expansion teams. The pandemic hiatus and restart moved Nashville to the East in a revamped setup where geographical closeness mattered most. Conference imbalance led the league to add a four-team play-in round in the East. Add to that points-per-game to determine the final tables, and the conferences were close to an afterthought to get to the playoffs.

What that means for 2021 isn’t obvious. The league is back to a regular 34-game schedule with limited fans in some markets. We’ve already seen in Europe what the absence of fans does for home-field advantage. The league has unbalanced conferences this season, 14 teams in the East and 13 teams in the West. The play-in round is the same in both, a life-preserver for those finishing 6th and 7th. The West gets this season’s expansion team while the East contends with the reloaded version of FC Cincinnati and the revamped Inter Miami.

MLS hasn’t announced the club schedules, but the expectation is that, like last season, the conference takes precedence. The league’s schedule highlights conference play for the bulk of the season. Whether or not that’s what the league should want is certainly worth asking.

For years, any discussion of MLS included the footprint. That wasn’t just spreading teams around the country. It was getting enough interest in major markets to pull the league’s broadcast rights up. Expansion has filled in the map, but there are still serious questions about the league’s TV ratings. It’s not just pointing to a number and noticing it’s not very good. It’s figuring out what realistic improvement looks like and how MLS gets there.

In American professional sports, the model tends to center around what the National Basketball Association did in the 80s and 90s. The Showtime era of LA Lakers vs Boston Celtics led into the dominance of the Chicago Bulls. That raised the league’s profile nationally, carrying along the biggest market in the country that seldom had a competitive team. Helping that out was a run of phenomenal players, something that MLS is unlikely to have as they push for relevance in a crowded global soccer marketplace.

MLS has no choice but to work toward something else. A local relevancy that pushes the product up across the board without leaning on being the top league in their sport. That’s not something any of the other North American professional leagues have had to navigate. Even the National Hockey League, with its own issues trying to build nationwide appeal in the United States, is the best domestic league in its sport. It starts with that and then tries to build out. MLS has spent over 25 years addressing the existence of and competition from other better leagues with increasingly easier access for American fans.

What that does is over-highlight every competitive decision the league makes. Too much focus on the business and single entity, not enough budget to attract elite players, silly team names, the continual expansion cycle, and those basic structural choices. The problem with a single table is even with 14 playoff spots it makes too obvious of a distinction between good and bad. Yet the focus on conference play at the expense of broader rivalries potentially does the same. It also limits the league’s reach.

Though situations have made it seem like much longer ago, the biggest game on the regular season schedule in 2019 wasn’t when LAFC hosted Atlanta on July 26. That was the only time they played that season, a 4-3 win for the home team. Somehow, it was the game LAFC played the week before that ended up the high point. Zlatan beat LAFC 3-2 in Carson, a ridiculous display of individual skill that started a season-long cycle that ended in the playoffs. There would be no repeat when it was clear Ibrahimovic would take his considerable talents back to Europe and help power the team currently in 2nd-place in Serie A.

For MLS, the success of the Zlatan game highlights two problems. Once LAFC emerged as the clear favorite in the West, it overshadowed what should’ve been the biggest regular season game on the schedule. It also highlighted the single-season design of too many MLS clubs especially when it comes to pricey superstars. There would be no LAFC on the road at a sold out Mercedes-Benz Stadium or a meeting in MLS Cup in 2019. By design, the MLS setup turned that game into one and done for the season. By situation, Zlatan vs LAFC also didn’t get a renewal.

Maybe that’s not the best way forward. Maybe, MLS should put the focus on the product first, highlighting its best chances to show the TV audience what they might be missing in real-time. Without that, it’s trying to build a nationwide fan base over what, at best, are regional rivalries. At worse, they feel forced like the extremes of the league’s rivalry weeks. Attempting to create derby cultures in LA and New York doesn’t require trying to pull along the other 25 teams. Other leagues have divisions within conferences for a reason.

One more example MLS can take from those other North American leagues. Almost all of them have multiple teams in the same major markets. Almost none of them in any of those leagues are each other’s biggest rivals.