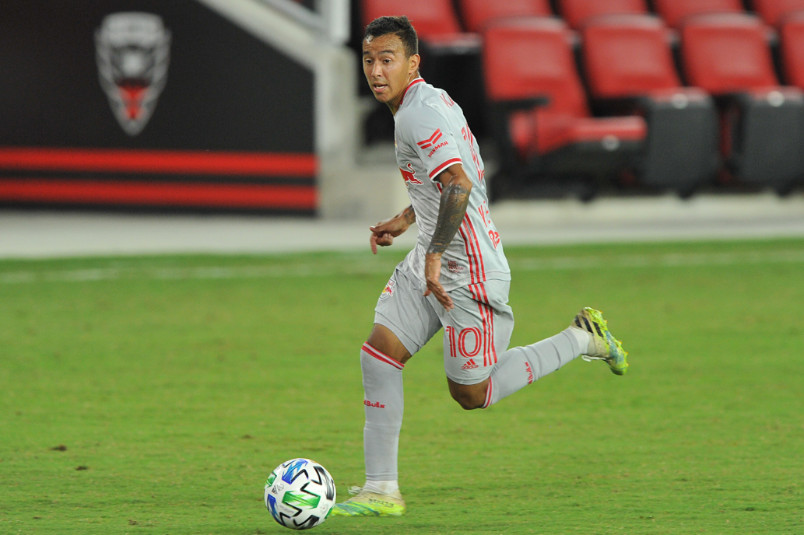 By Charles Boehm – WASHINGTON, DC (Feb 25, 2021) US Soccer Players – It was the winter of 2017-18, and New York Red Bulls fans were abuzz. After slipping from 1st-place in the MLS Eastern Conference to 6th the previous season, their team seemed to need a jolt. A drumbeat of rumors and reports suggested that RBNY had found one in Argentina, setting the stage for a long-running transfer saga around one Alejandro Romero Gamarra.

Better known as Kaku, the play-maker had risen out of the same rough Buenos Aires neighborhood that Carlos Tevez put on the map, starring for Huracan as they earned promotion to the top flight and won the Copa Argentina. Quick, incisive, and audaciously skillful, Kaku seemed the perfect luxury reinforcement for Jesse Marsch’s high-pressing squad.

Red Bulls supporters coined the hashtag #KakuWatch on social media as they breathlessly followed every twist and turn in the club’s pursuit, which finally culminated in a splashy signing on a transfer fee of more than $6 million. It all seemed worth it when Kaku racked up six goals and 14 assists to spearhead the side’s second Supporters’ Shield in three years. RBNY’s prospects of an eventually profitable sell-on also looked bright, with Liga MX giants Club America making a run for Gamarra and others overseas reportedly eyeing him up, too.

Two years later, the Red Bulls find themselves in a different role, that of a jilted love interest. Kaku left for Saudi Arabian club Al-Taawoun this winter, claiming that New York failed to properly notify him of their decision to exercise his 2021 contract option, thus making him a free agent.

RBNY and MLS insist that they retain rights to the player and therefore require compensation from Al-Taawoun even as Kaku debuted and scored for his new team in recent weeks. They reportedly lobbied the US Soccer Federation to withhold his international transfer certificate. When that didn’t work, they stuck to their guns with a terse public statement.

“The issuing of the provisional ITC does not change the fact that a valid contract exists between Major League Soccer and Kaku,” it read. “In response to the player’s apparent signing with Al-Taawoun, MLS and the New York Red Bulls have sought to arbitrate the dispute pursuant to Kaku’s MLS contract and will take all further necessary action to enforce their rights.”

It’s the latest in a history of restless players flying the coop from their MLS contracts by leveraging doubts about the option year concept.

Fresh off winning the 2013 MLS Golden Boot, Camilo Sanvezzo jetted off to Mexico to sign with Queretaro in January 2014. Sanvezzo’s agent claimed that his client was a free agent despite the Vancouver Whitecaps having picked up his contract option.

“It is obvious that such a clause was an expectation and not a condition, nor an obligation,” Lucas Teixeira later said. “FIFA and the [Court of Arbitration for Sport] recognized that in numerous cases that the unilateral option is inconsistent with the principles of contractual freedom and equality protected by FIFA.”

A year later, future Mexico World Cup standout Carlos Salcedo took to Twitter to deliver an ultimatum to Real Salt Lake, his club at the time. Frustrated by what he considered insufficient minutes in his first two MLS seasons, the homegrown asked the club not to pick up his 2015 option. As it turned out, his father and then-agent were preparing a return to Liga MX, insisting on a move to Chivas that RSL had little choice but to accept. The six-figure price would soon look like a pittance.

Three winters later, Canadian international Cyle Larin gave the tactic a try. He headed to Turkey to join Besiktas without permission from Orlando City. Besiktas sporting director Safak Mahmutyazicioglu confidently said that Orlando had “exercised their right to extend the contract without asking the player’s approval” and that “FIFA always rules in favor of the player in one-sided contract extension cases.”

That set off a protracted drama which finally ended with the Orlando forcing Besiktas to recognize their contract and officially announcing that they were “disappointed with the unacceptable behavior of the athlete and his representatives.” Though they didn’t walk away empty-handed, Orlando had to accept what was almost certainly a lower transfer fee than they would have brokered under more normal circumstances.

In all these cases, players looking for an exit saw the legal uncertainty about option years as a soft spot to press. Unilateral option years are a common feature in North American professional sports. MLS has relied on them heavily, inserting them in most of their player contracts. They provide teams with roster flexibility and cost controls. It also limits the player movement that the league’s executives consider to be a danger to their model.

They’re less common abroad. FIFA and CAS have approached the matter on something of a case-by-case basis. As Chicago-based attorney Terry Brennan wrote in 2018, FIFA’s Dispute Resolution Chamber has alluded to contracts with option years as matters of “disputable validity,” ruling in favor of both clubs and players over the years. That’s left little in the way of hard-and-fast benchmarks, even with FIFA tending to defer to a given league’s need to operate within its home country’s particular legal and sporting environment.

Contracts with options that offer meager annual pay increases appear to be generally viewed more dimly by the authorities. Conversely, some rulings have gone against players judged to be behaving questionably in terms of wriggling out of fair contractual obligations. So far, MLS has shown a limited appetite to go to the mat in its cases, reaching compromise resolutions rather than insisting on a conclusive ruling about its use of option years.

That suggests that the league may not be completely confident that the sport’s highest chambers will uphold its standard operating procedures. Surrendering a few million dollars in transfer fees here and there might be worth avoiding landmark ruling against a core business principle. Until that calculus changes, opportunistic players and agents may keep these option-year tactics in their back pocket.

In Kaku’s case, an arbitration process likely awaits, with him and the MLS Players Association on one side and MLS/RBNY on the other. Even if the league and its club find some satisfaction, it will probably reap a fraction of the player’s perceived market value. Carrying this dispute any further up the ladder might just put the concept of option years under the hottest of spotlights.