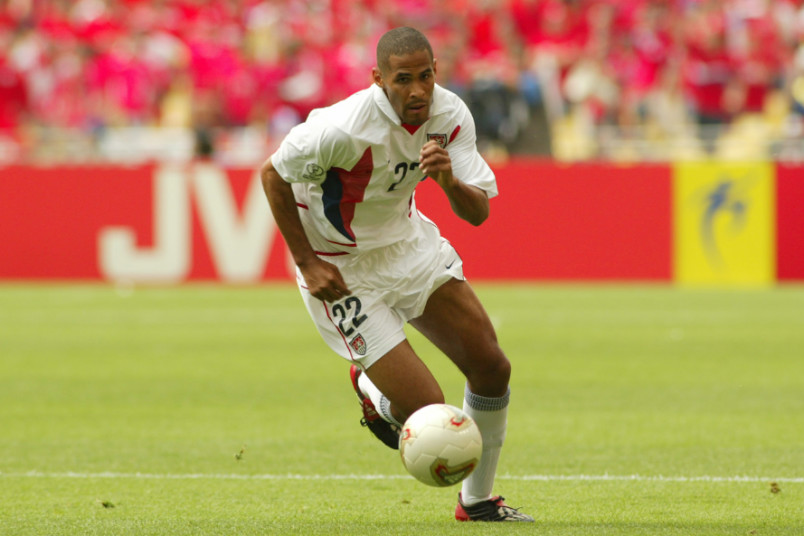 One of those reasons easily overlooked for its impact on both of those modern phenomena is the matriculation of America’s early generations of professional players moving into other soccer roles in their post-playing careers. Despite advantages in sheer numbers of players and the infrastructure available across the country, America long lacked the sort of institutional knowledge that comes from people who played the game at a high level.

Like many of his American peers, Tony Sanneh’s career defied the conventional wisdom of his era. An interest in the game sparked by a trip to visit his grandparents in West Africa eventually led to a college run at the University of Milwaukee. Sanneh’s move into the professional ranks predated the launch of MLS, spending time in the semi-pro USISL and with indoor teams.

A stint with DC United launched Sanneh into the USMNT picture and from there to Hertha Berlin of the Bundesliga. At a time when the American player was a non-factor in the top leagues of Europe and the internet wasn’t yet capable of connecting disconnected competitions, Sanneh had to get creative with his pitch.

“I made a videotape,” Sanneh recalled. “I went upstairs to the coach’s office VHS spliced together a videotape. I gave it to some lawyers who said that they were representing me. They sent it to like 10 clubs in Europe. Most of them were Dutch because I wanted to go to Holland and like three German teams. All three German teams responded, ‘If that’s really you, we’re interested’. And none of the Dutch teams did. I went over for a couple of days and had a training and it all worked out.”

Sanneh appeared in the Champions League in 1999 with Hertha, then moved to FC Nurnberg in 2001. He famously played a dynamic fullback role for the USMNT at the 2002 World Cup and assisted on Brian McBride’s goal against Portugal in the group stage.

Following a career that came to a close in 2009, Sanneh returned to his native St Paul and launched a foundation. The organization’s mission is to improve the lives of youth in the Twin Cities area through soccer. The foundation specifically addresses racism as part of its program, something Sanneh dealt with during his playing days.

“There’s definitely some things that I had to put up with,” Sanneh said of his time in Germany. “Back then you had bananas being thrown on the field or monkey noises when you warmed up and even some personal racial comments around the city. In one of my teams, I was the highest-paid guy in Nurnberg. So when our team started not to do well I was kind of a scapegoat and it turned into more of a racial thing.”

Racism in soccer in the United States tends to be more subtle than bananas and racial epithets. Sanneh is equally as interested in making access to the sport easy and more equitable for players of color as he is in taking on racist actions.

“Kids of color don’t really feel comfortable. They don’t have the same access,” Sanneh said. “Communities that are first-generation, are things being translated? Are we looking at their living conditions? Giving somebody a scholarship on the other side of town? It’s great when he has to take three buses and you complain every time he’s five minutes late, is that really equitable?”

Sanneh’s status as one of the foremost black players in the most successful run of the USMNT conveys a status within the soccer community, both in Minnesota and beyond, that he doesn’t take lightly. In a sport without a deep history and a still-developing American identity, Sanneh believes he has a responsibility.

“I think it’s our responsibility when we have a platform to use it,” Sanneh explained. “You know, I don’t subscribe to the Charles Barkley ‘I’m not a role model’ idea. I believe those of us that have an opportunity and a voice in the platform need to use it for positives.”

“At the highest level, right, it can’t be pay-to-play. When we’re looking to develop talent money can never be a barrier,” Sanneh said. “You hope that it starts from the national team to our professional leagues, that they make a commitment to investing in the local community at the youth level, which means like the very best talent should get to play for free and there should be no barrier if you really want to reward people for being better.

“And then second, we have to just invest at the grassroots level and then we have to really have zero tolerance for racist behavior and then we have to do some reeducation of coaches. So to understand that if you want people from different cultures, then you need to respect them and celebrate them.”

For a St Paul kid with a Gambian father and a mother from rural Wisconsin, the quest to pull together communities under the banner of soccer illuminated Sanneh’s work. While many of his peers are coaching or running MLS clubs, Sanneh is a decade into the effort, working at the lowest levels of the game.

The rise of American soccer players, many of them black, is heartening to Sanneh, but he doesn’t believe soccer is doing enough to welcome players of all backgrounds. Instead, the proliferation of soccer from around the world on American television gets the credit.

“I don’t think that we’re doing better in creating a better environment for [players of color],” he said. “I do think the popularity of the sport is helping by giving them access to that from a fan perspective, which then is participation. You talk to a lot of black players and especially African-American women, I think they have some real barriers playing sports because a lot of times they’re the only one. It’s really not a great environment for them.”

The difference between equality and equity is at the center of Sanneh’s philosophy. The former is easier to achieve but often fails to address the realities of life for players from poorer backgrounds or who live far away from elite clubs. Sanneh uses the example of a scholarship player to drive home the point.

“Do you really want him on your team? If you want the benefits of having a diverse, inclusive environment, you’re going to have to go the extra mile to make sure that it doesn’t happen just on the field. And we always say, a diverse team is having kids from ten different countries. An inclusive team, they all go to the same barbecue afterward.”