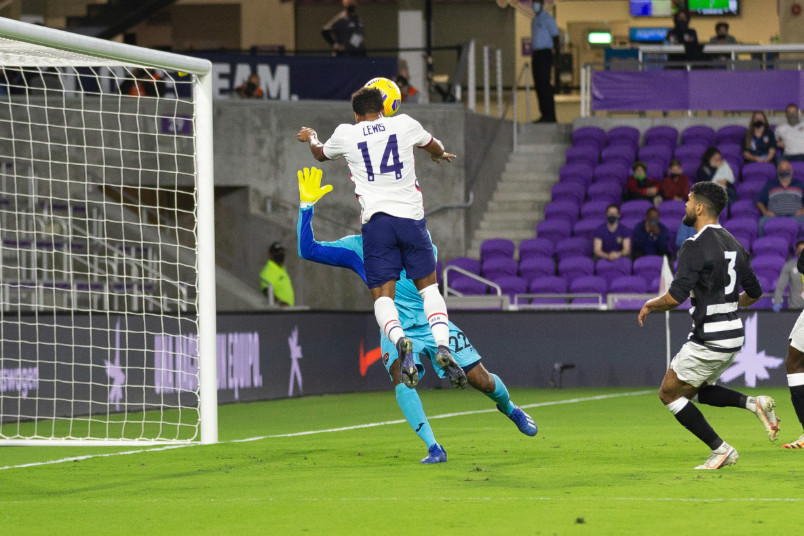 By Charles Boehm – WASHINGTON, DC (Feb 4, 2021) US Soccer Players – In the lead-up to Sunday’s friendly vs Trinidad & Tobago, the USMNT made no secret of one aspect of their ongoing tactical evolution.

“I think what you’re seeing this year, or will see a lot more this year, is our ability to high press and be really aggressive on the pressing front,” center back Walker Zimmerman said last week. “I don’t think we did that quite as much in the early games under Gregg…. We’re going to be a team that hunts the ball, we’re going to win it back and we’re going to try and create goal-scoring opportunities from that pressure.”

While a limited T&T side wasn’t the best gauge, it all fits into what we’ve seen from the USMNT of late. A tone of tactical aggression and assertiveness has carried across four friendlies utilizing three distinct rosters over the past three months, with generally very positive results in terms of performance. Framed as an effort to cultivate a more varied collective skill set, it’s also a reflection of a larger, younger, and more energetic player pool.

“We want to take advantage of our athleticism,” USMNT coach Gregg Berhalter said back in November. “So I want to see us be very aggressive on the defensive side of the ball, high-pressing teams. We think we have enough speed in the back to cover up for, or to be able to play a higher line.”

Whether it’s the foundation of their identity or one of several clubs in their bag, pressing continues to be a fashionable option for top teams around the world. Honing the high levels of fitness and organization required for it can help make up for talent deficits against favored opposition. Conversely, it can multiply other advantages and/or force the adversary onto the back foot both with and without the ball.

Plenty of knowledgeable observers have argued that it meshes well with the American player’s mentality, too. The USMNT has controlled the tempo in most of these past four matches, three emphatic victories and one respectable away draw. There’s one problem. None of these opponents played a particularly proactive style likely to find and exploit holes in a high press.

That can’t really be helped at the moment. Finding challenging friendly opponents has always been a difficult process. The COVID-19 pandemic has made it even more complicated. That may remain the situation for some time to come, limiting efforts to hone tactical tweaks heading into the hectic competitive schedule looming later this year.

So just what kind of team will the USMNT be when the important games arrive, starting in early June with the Concacaf Champions League semifinal against Honduras? It sounds like Berhalter wants there to be more than one answer to that.

“For us, I think it’s about just evolving,” the coach said in his pre-match press conference on Saturday. “Having a very stable mid-block defending structure to now working on a high-pressing structure, where it gives us an alternative, I think that’s the idea, is to become less predictable.”

When to push the tempo

Both the enduring lessons of this region’s World Cup qualifying odyssey and the specific rigors ahead in this year’s unique obstacle course probably informs Berhalter’s pragmatism.

The Nations League semifinal and final will arrive hard on the heels of the European club season’s conclusion. The expectation is a first-choice squad with Euro-based players fit and in form. Peak North American summer heat won’t have set in just yet, so conditions should favor intense pressing.

Further down the line, the USMNT already know they’ll host Jamaica and Costa Rica during World Cup qualifying in October. Then they’ll welcome Mexico in November and host Honduras and one of Concacaf’s semifinal round survivors to US soil in January. All those could happen in cooler or outright wintry locales where the hosts can more easily dictate terms.

When to weather and survive

When the Gold Cup window arrives in July, conditions might be different. That tournament tends to involve hot weather, limited recovery time, and significant travel between venues. Berhalter will probably have to call in a mostly different roster from the Nations League games to give European-based players the offseason down time dictated by both common sense and FIFA regulations.

Tropical settings await in the September window with visits to Honduras and a semifinal survivor to be determined. Traditionally daunting away dates with Mexico and Costa Rica await in March 2022, the final window of qualifying.

It’s worth stressing the qualifying schedule. Twelve of the USMNT’s 14 Octagonal games will take place in three-game international windows instead of the usual two. That normally means a Thursday-Sunday-Wednesday slate of games. It makes an already tough challenge that much more punishing.

As talented as the current crop of players is, as deep as the pool seems to have become, as proactive as Berhalter generally likes his teams to be, this is a vicious slog. It seems impossible to avoid using some calculated catenaccio to survive the harshest environments along the way.

“The idea is to be able to control the opponent with and without the ball,” said Berhalter over the weekend, “and certainly high pressing gives us the opportunity to make teams uncomfortable. And so that’s part of part of that, but we also like to like to work in a mid-block at times when we need to control the opponent and prevent some penetration.”

Notably, in the 2018 cycle Bruce Arena set up the USMNT in a deep, reactive 5-4-1 shape for their visit to Mexico City. That one-off gambit dug out a 1-1 draw. Knowing Berhalter’s meticulousness, that level of granular preparation may well be the rule rather than the exception this time around. Whether that sort of approach clouds or clarifies this team’s identity figures to be one of the most intriguing questions of the next 14 months.