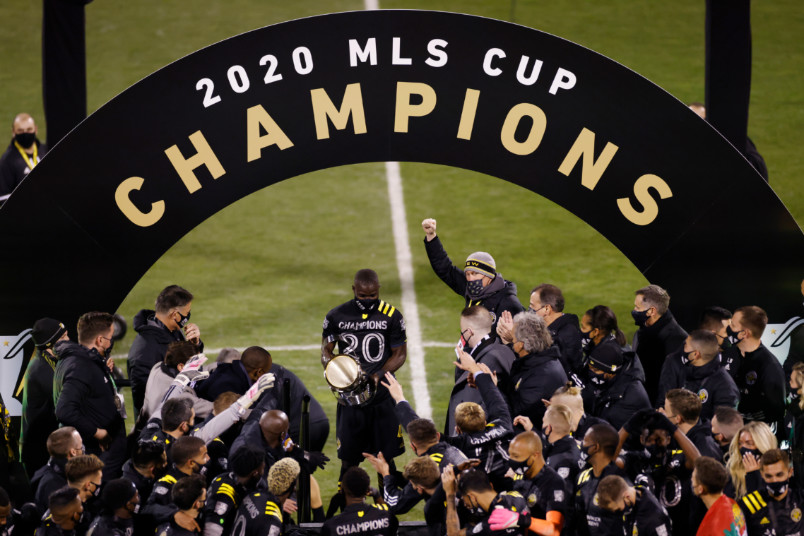 By Jason Davis – WASHINGTON, DC (Feb 10, 2021) US Soccer Players – The most unusual year in Major League Soccer history ended with the Columbus Crew lifting its second MLS Cup trophy following a comprehensive victory over the Western Conference champions Seattle Sounders. The season did not end the way the Sounders had hoped, but the club’s achievement of reaching four MLS Cup finals in five years put it in elite company among the greatest teams in league history.

The teams that the Crew and Sounders beat in the Eastern and Western Conference finals can claim momentum coming into the new season. New England and Minnesota United weren’t clear contenders when the 2020 season began or when it restarted. Making the playoff final four means they get consideration as 2021 arrives.

We start with the champs. The Crew delivered on expectations built in early 2020 by getting Darlington Nagbe from Atlanta United and playmaker Lucas Zelerayan from Club America. Zelerayan represented an incoming transfer record signing for the club in terms of pure dollars, while Nagbe cost Columbus a king’s ransom in MLS allocation money. Anything but a deep run in the playoffs would have been a disappointment. With a title secured, the Crew enters 2021 with the expectation that they can repeat.

GM Tim Bezbatchenko wasted no time improving the roster for the new year. While most MLS clubs bided time following a difficult season and the start of new labor negotiations in early January, the defending champions worked to add depth and potentially one game-changing starter to an already excellent first eleven.

Columbus’s gain is Western Conference finalist Minnesota’s loss. The Loons charged their way to a showdown with Seattle for the right to go to the MLS Cup final on the back of two attacking powerhouses, Emanuel Reynoso and Kevin Molino.

Molino scored twice in the Western Conference semifinal on the road in Kansas City to lift Minnesota over the favored Sporting Kansas City. The versatile attacker was unplayable at points in the Loons run and figured to be a central part of the club’s push for silverware in 2021.

Instead, Molino decided to leave Minnesota as a free agent despite the club’s attempt to resign him. MLS contract details being so opaque, we can’t know what United offered Molino or why he turned it down. Molino joined the Crew on January 7 and will likely line up on the left-wing in Caleb Porter’s team. There, he’ll get a chance to combine with another boffo Argentine playmaker signed for 2020, Lucas Zelerayan.

The Crew will get another boost for 2021 without making a new signing. Center back Vito Woomgoor, who missed the balance of the season after an injury suffered at MLS Is Back, will return to bolster the backline.

Bezbatchenko also added depth at the striker position by signing MLS great Bradley Wright-Phillips. Wright-Phillips will get ample chances to play if starting striker Gyasi Zardes misses time while away with the USMNT for various competitions scheduled for 2021.

The club Columbus beat in the MLS Cup final is in a much different position as preseason approaches. No one will ever count the Sounders out as a new season begins, but the roster has regressed since the end of the 2020 season.

Jordan Morris leaving on loan to Swansea City is the biggest missing piece. The loan includes a buy option for the Swans, which means the Sounders can’t be sure of the American’s return come summer.

Seattle may sign a replacement for Morris before the primary window closes, but even that would only mean filling one of two holes left by departures from last year’s team. The club declined Joevin Jones’s option, ending his second stint with the Sounders. There’s an extra degree of difficulty in finding a player to replicate Morris’s output who fits into his salary window.

The Sounders also parted ways with Gustav Svensson and Kelvin Leerdam, two former starters. Even if neither finished 2020 in starting roles and the club looked set for other options at their positions, they provided depth that will be missing this season.

One of the keys to the Sounders’ ability to compete for championships every year has been general manager Garth Lagerwey’s skill in massaging the salary budget. After a championship season in 2019, Lagerwey dealt with escalating salary demands, high profile departures, and uncertainty during the initial stages of the winter signing period due to CBA negotiations. He still managed to put a championship-caliber team on the field.

Seattle consistently threads a needle that allows them to challenge for the big trophy despite not always being among the best regular season teams. The eye of the needle looks a little smaller in 2021.

The conference runners-up each arrive at the start of 2021 encouraged by last year’s showing and anxious to work towards a title. Bruce Arena’s first full season in New England didn’t see the Revolution wow anyone with its regular season performance. The impressive playoff run showed how quickly perceptions can change.

New England’s roster rebuild, like much of the league’s, is in progress. The Revs said goodbye to two players who started double-digit games in 2020, Alexander Buttner and Kelyn Rowe. Key additions to this point in the offseason include left back Christian Mafla and MLS veteran AJ De La Garza. New England finished eighth in the East last season. On paper, they’re not yet better than that for 2021.

The only club to reach the final four last year that didn’t have a playoff history to speak of was Minnesota United. The Loons not only won their first playoff game in 2020, but they also shocked the league by reaching the conference final.

Much of that success is due to a sturdy defense, even with the absence of 2019 Defender of the Year Ika Opara. Midseason acquisition Emanuel Reynoso and Kevin Molino aided the attack. United spent much of the year working to find a workable option at the striker position, then landed on using winger Robin Lod up top by the end of the campaign.

The club hasn’t added any forwards so far in the offseason and parted ways with Kei Kamara and Aaron Schoenfeld at the season’s end. Count the additions on three fingers. There’s midfielder Wil Trapp, perhaps as an eventual replacement for Oswaldo Alonso, defender Callum Montgomery, and defender Jukka Raitala.

If there are bigger plans for 2021, they have yet to come together. Like everyone else, Minnesota seemed to be waiting for the business of the CBA to conclude. With that settled, it’s time to figure out which of these teams are doing enough to maintain their status this season.