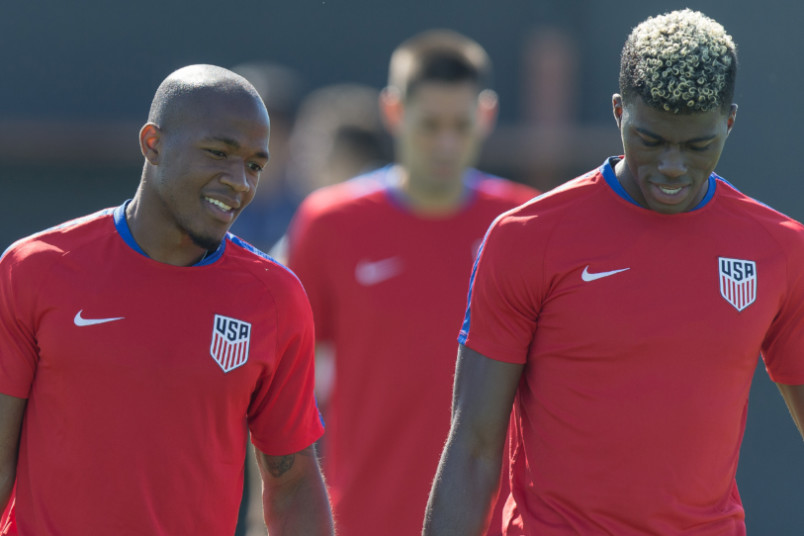 By Clemente Lisi – NEW YORK, NY (Mar 1, 2021) US Soccer Players – In 2007, Major League Soccer instituted the Designated Player rule. By design, it was to allow clubs to sign elite players. Namely, the LA Galaxy’s move for global superstar David Beckham. The rule, allowing teams to sign as many as three players outside their salary cap, revolutionized the league.

It also made it possible for more Americans to stay in MLS or return to the league where they got their start. As MLS enters its 26th year of existence, the rule has evolved. The league always made room for international designated players as a specific category, but that’s taken over. While a number of Americans have been designated players, there are currently only four holding that designation as training camps open for the 2021 season.

That’s created a somewhat tricky situation for MLS teams. The designation carries prestige, a clear signal of a player’s worth relative to the league’s standard payroll. While it can reward players, removing the DP designation or finding ways around it sends an equally clear message. Clubs reworking former designated player deals became common early in the process. The league’s adoption of Targeted Allocation Money added another twist to player compensation.

MLS is now pushing for younger designated players, pointing to clubs that found success recruiting mainly South American players to sell to Europe. That engagement with the transfer system runs hand-in-hand with the league selling emerging American talent. The reward aspect of the designated player designation is still there, used to keep players in the league. It’s just becoming less and less common for those players to be American.

Gyasi Zardes was the top-scoring American player last season, leading Columbus to an MLS Cup title. The towering winger, who turned 29 this past September, has hit his stride after shredding defenses for years. It was in 2018 with the Crew that Zardes emerged stronger and better once he recovered from injury. The designated player designation came a year later. Currently a regular on the USMNT, he is poised to have his best season ever in 2021.

With him in the Crew’s starting lineup is Darlington Nagbe. A DP since last season, Nagbe is among the best midfielders in the league. Turning 31 this July, he’s a key part of the Crew midfield on both sides of the ball. His dribbling and passing abilities make him the kind of finesse player that’s a joy to watch.

Then there’s Jozy Altidore at Toronto. Part of an earlier spending spree to revitalize a struggling club, he’s now a last man standing of sorts. Michael Bradley went from designated player to a reworked deal using targeted allocation money to keep him with the club last season. Altidore’s contract runs through 2022 and has him as one of the highest paid players in MLS. It’s almost a throwback in the current era to the time when clubs spent DP money on USMNT starters like Landon Donovan and Clint Dempsey.

Meanwhile, one of the favorite targets of European clubs in recent transfer windows stays put in MLS without a designated player contract. Aaron Long is key to an otherwise troubled Red Bull back line. Converted from midfielder by former Red Bull coach Jesse Marsch, Long has thrived in MLS while becoming a regular with the USMNT. That used to be a direct line to a DP designation. Now, it’s more likely to end up with a targeted allocation money contract like Long’s or other ways to use the roster rules to keep a player.

An example of that is Cristian Roldan in Seattle. The 25-year-old emerged as a key part of Seattle’s setup while also moving into the USMNT picture. Entering the prime of his career, Seattle offered him a guaranteed contract before the 2019 season that runs through 2023 without having to use DP or TAM designations.

Paul Arriola is on loan to Swansea City with the potential for a permanent move. He holds a designated player slot with DC United. Arriola’s move to England potentially takes a unique talent out of DC and the league. Unavailable due to injury for most of last season, he quickly reemerged with his USMNT play late in the year. Arriola re-signed with DC during the summer, a deal that runs through 2023.

Here’s where it gets tricky with the current version of MLS salary designations. Of the four American designated players, Altidore and Zardes make more than a million dollars. That makes it unlikely that their clubs will use targeted allocation money to pay down those deals and change their designation. The other two could potentially be in the position where targeted allocation money could do that.

At the same time, MLS is pushing its U-22 initiative to bring in younger players at a higher salary. That focus on emerging talent is part of the business plan seen in selling leagues, expecting an eventual return on players. Designated player strategy is also becoming more about seeing a return in the transfer market. That’s part of the rationale for clubs across the league spending on DPs.

The original designated player model came into existence to bring in names familiar across the sport. Now, it’s more about spotlighting talented players with an eye to an eventual transfer fee. Both are business decisions, and both should provide the league with the talent to improve the quality of play. In an era where no MLS team could possibly afford the transfer fees of the best USMNT talent at top European clubs, it’s a pragmatic response from a single-entity structure.