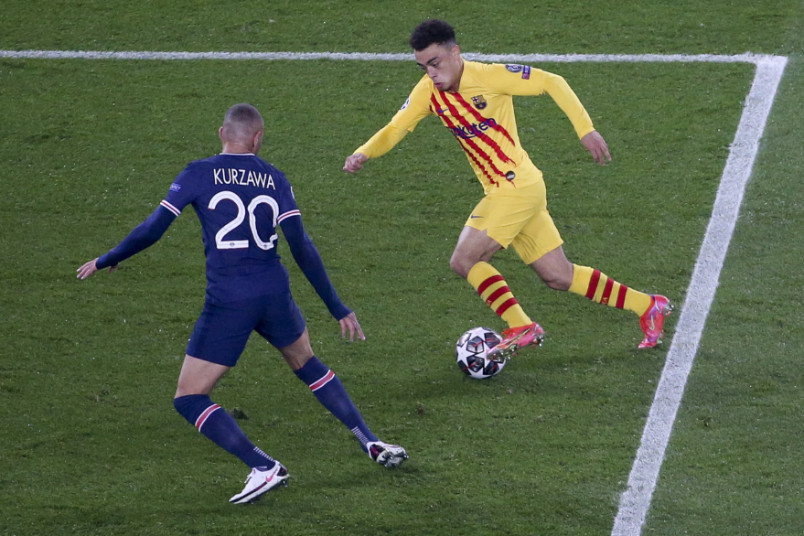 Thursday’s soccer news starts with two more teams with USMNT players unable to advance in the Champions League. Sergino Dest subbed out in the 66th minute of Barcelona’s 1-1 draw at PSG, exiting the tournament 5-2 on aggregate. Trailing from a 30th minute penalty, Lionel Messi equalized on the night in the 37th. Last season, Barcelona exited to Bayern Munich in the quarterfinals. Konrad de la Fuente was on the bench for Barca.

“We are departing this Champions League in a very different manner from the way we did last season,” Barcelona coach Ronald Koeman said. “In this game, we hit our level and that’s the road we have to follow. Clearly we are sad but the impression we leave behind after this match is important.”

Last season’s semifinalist RB Leipzig lost 2-0 on the night to Liverpool in Budapest, exiting 4-0 on aggregate. Tyler Adams went the distance for Leipzig, falling behind in the 70th and giving up another goal in the 74th.

Liverpool was the better team today and deserved to go through,” RB Leipzig coach Julian Nagelsmann said. “We didn’t have enough fight to score the goals we needed. At the start we took too long to get used to Liverpool’s game, because they were putting less pressure on us today. So we were caught on our heels too often and couldn’t create anything to get excited about up front. We went about things a little too light-heartedly and made some basic errors. Our build-up play was a bit too lethargic and we didn’t manage to get ourselves fired up. It’s in moments like these where you really notice the absence of fans, who would have pushed the team forward.”

Moving to the Bundesliga, Josh Sargent scored in Werder Bremen’s 2-0 win at Arminia Bielefeld. Sargent opened the scoring in the 47th. Arminia Bielefeld went a man down in the 71st. Kevin Mohwald finished off the Werder goals in the 75th. Sargent subbed out in the 64th minute.

“It sounds a bit cheesy to say it but it was always my number one priority to be the hardest working player in the team,” Sargent said. “I know that if I work hard every day to better myself then I’ll be rewarded for that with goals. But the three goals certainly won’t change my mentality or my basic attitude of always working hard.”

Zack Steffen was on the bench for Manchester City’s 5-2 home win over Southampton in the Premier League. Kevin De Bruyne put City up in the 15th with Southampton equalizing from the penalty spot in the 25th. Riyad Mahrez scored for City in the 40th and Ilkay Gundogan made it 3-0 in first-half stoppage time. Southampton pulled a goal back in the 56th. Mahrez scored his second goal in the 55th and De Bruyne got another in the 59th. Daryl Dike’s Barnsley drew 0-0 at home in the Championship. Dike saw yellow in the 87th minute.

“I think it’s a good point,” Barnsley coach Valerien Ismaël said. “You have to take the point and the clean sheet, and you can win the game at the beginning of the second half or you can lose the game at the end, but it was a great save. That’s why we have to take the point, another clean sheet and we keep moving. It’s a little step, but you never know what happens with one point and it could be a good situation.”

The Guardian’s Barney Ronay uses Messi’s missed penalty to make a larger point about Barcelona. Football Italia on a Champions League without Lionel Messi and Cristiano Ronaldo. The Independent’s Miguel Delaney and superstar dependence in the Champions League. BBC Sport with Coventry City’s stadium saga coming to an end. MLSsoccer has the 2021 home openers.