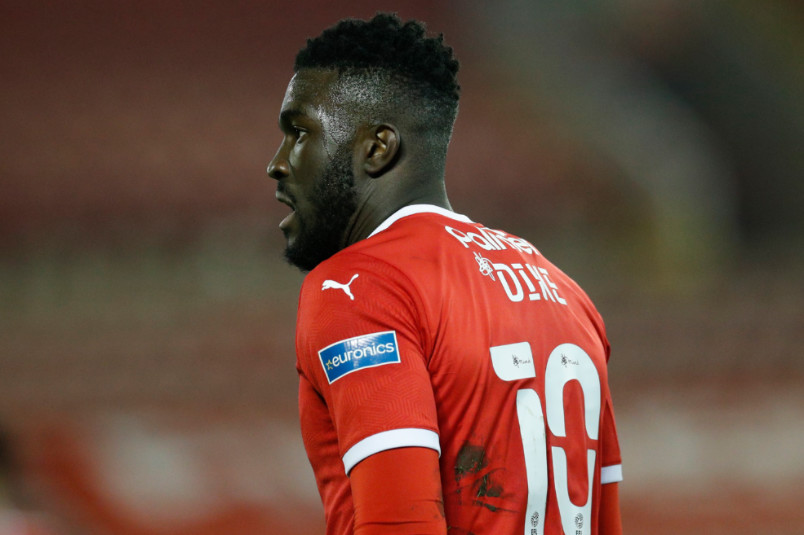 The soccer news starts in the Championship. Daryl Dike scored in the 49th minute of Barnsley’s 1-0 home shutout of Birmingham City. “In training, we saw some shots from him and we were really impressed,” Barnsley coach Valerien Ismael said. “We thought if he hits the ball like that, it will be a disaster for the opponent’ keeper and it’s exactly what happened. We knew he had a lot of power in his shot, but what a brilliant goal.”

Antonee Robinson’s Fulham shutout Liverpool 1-0 at Anfield in the Premier League. Mario Lemina scored in the 45th minute. Back in the Championship, Cameron Carter-Vickers’s Bournemouth drew 1-1 at Preston North End. Arnaut Danjuma scored in the 37th with PNE equalizing in the 71st.

Tyler Adams subbed out in the 84th minute of RB Leipzig’s 3-0 win at Freiburg in the Bundesliga. Christopher Nkunku scored in the 41st with Alexander Sorloth doubling the lead in the 64th. Emil Forsberg finished off the goals in the 79th minute. Chris Richards’s Hoffenheim beat John Brooks’s Wolfsburg 2-1 at home. Christoph Baumgartner scored for Hoffenheim in the 8th minute with Wout Weghorst equalizing in the 23rd. Andrej Kramanic put Hoffenheim ahead in the 41st. Wolfsburg’s Paulo Otavio Rosa Silva saw red four minutes into stoppage time.

Timmy Chandler subbed on in the 82nd minute of Entracht’s 1-1 home draw with Stuttgart. It took Eintracht a minute to come back from Stuttgart’s goal with Filip Kostic equalizing in the 69th. Josh Sargent scored in the 66th and subbed out in the 86th of Werder Bremen’s 1-1 draw at Cologne. Sargent put Werder Bremen up with Cologne equalizing in the 83rd. In the 3.Liga, Terrence Boyd subbed out in the 81st minute of Hallescher’s 3-0 loss at Unterhaching.

Weston McKennie subbed on in the 70th minute of Juventus’s 3-1 home win over Lazio in Serie A. Down a goal from the 14th minute, Adrien Rabiot equalized for Juve in the 39th. Alvaro Morata scored in the 57th and converted a 60th minute penalty. A league down, Andrija Novakovich scored in Frosinone’s 2-1 win at Cosenza. Trailing from the 7th minute, Novakovich equalized in the 45th. Przemyslaw Szyminski scored in the 86th. Novakovich subbed out in the 85 minute.

Sergino Dest’s Barcelona won 2-0 at Osasuna. Jordi Alba scored in the 30th minute with Iliax Moriba doubling the lead in the 83rd. A league down, Shaq Moore’s Tenerife lost 1-0 at Real Zaragoza. The goal came in the 21st minute. Reggie Cannon picked up an assist in Boavista’s 3-0 home win over Famalicao. Ricardo Mangas scored for Boavista in the 17th with Cannon assisting on Paulinho’s goal in the 65th. Famalicao went a man down in the 75th with Sebastian Perez finishing off the Boavista goals a minute into stoppage time. Cannon saw yellow four minutes into stoppage time.

Andrew Wooten assisted on Admira Wacker’s goal in their 2-1 loss at Hartberg in the Austrian Bundesliga. Trailing from the 16th minute, Dominik Starkl equalized in the 37th with Wooten assisting. Hartberg went ahead for goos in the 52nd minute. Erik Palmer-Brown’s Austria Vienna drew 0-0 at hoke with Rapid Vienna.

Brandon Servania subbed on in the 69th minute of St Polten’s 4-1 loss at Brenden Aaronson’s Red Bull Salzburg. Taylor Booth put St Polten up in the 12th minute with Patson Daka equalizing for Red Bull in the 17th. Salzburg’s Enock Mwepu scored in the 33rd with Aaronson adding a goal in the 69th. Mergim Berisha converted a penalty four minutes into stoppage time. Aron Johannsson subbed out in the 73rd minute of Lech Poznan’s 1-0 win at Pogon Szczecin. Bartosz Salamon scored in the 40th minute.

Timothy Weah subbed out in the 62nd minute of Lille’s 3-1 win at Ajaccio in the French Cup. An own-goal put Lille up in the 9th minute with Xeka making it 2-0 in the 71st. Another own-goal extended Lille’s lead in the 84th. Ajaccio scored in the 87th minute. Weah saw yellow in the 53rd. In Ligue 2, Nicholas Gioacchini subbed on in the 59th minute of Caen’s 1-0 loss at Nancy. The goal came in the 7th minute.

Luca de la Torre scored in Heracles’s 2-1 home win over PEC Zwolle in the Eredivisie. Rai Vloet scored for Heracles in the 61st with PEC Zwolle equalizing in the 63rd. de la Torre scored two minutes into stoppage time. Matt Miazga’s Anderlecht drew 1-1 at home with Mechelen in the Pro League. Lukas Nmecha converted a 43rd minute Anderlecht penalty with Mechelen equalizing from the penalty spot in the 66th.