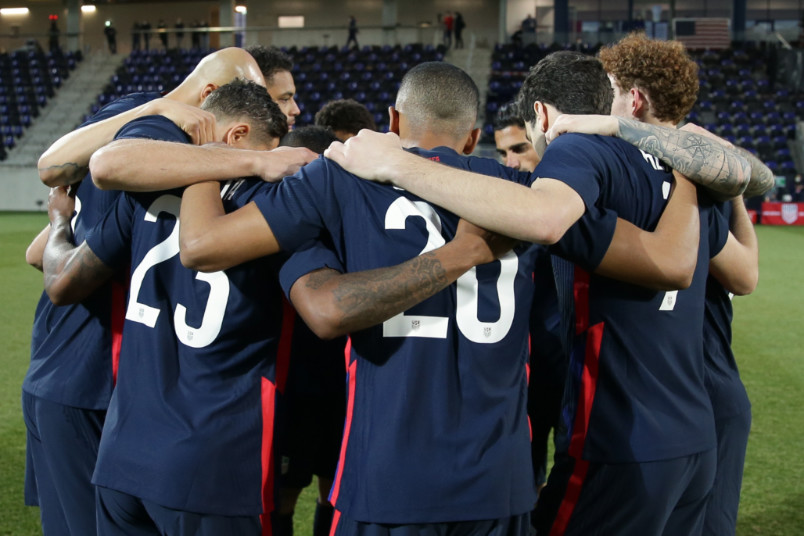 By Charles Boehm – WASHINGTON, DC (Mar 25, 2021) US Soccer Players – The USMNT ran their unbeaten streak to eight games on Thursday with a confident 4-1 defeat of Jamaica in Wiener Neustadt, Austria, the first of their two friendlies in the March international window.

Sergino Dest opened the scoring with a lovely long-range strike, the highlight of his eye-catching performance. Brenden Aaronson came off the bench and quickly doubled the lead with a slick finish after good work by Josh Sargent. And Sebastian Lletget bagged a late brace to underline why he’s become such a trusted regular under coach Gregg Berhalter.

Here’s a few observations from the victory, an impressive outing overall.

The Reggae Boyz were largely content to sit back and ask the US to break them down. That’s a likely preview of what many World Cup qualifying matches will look like. The response to it was encouraging. Though it took some time for them to find fluidity, the USMNT was active and purposeful on and off the ball, circulating possession and probing for gaps in addition to being sharp on the counterattack.

Some of the most interesting work happened when wingers like Christian Pulisic and Gio Reyna combined with advancing fullbacks Dest and Reggie Cannon, forcing Jamaican defenders to make tough decisions. The Pulisic-Dest interplay down the left flank, ably assisted by Lletget, hinted at a potentially devastating weapon in the longer term.

“I think this is the second time that they’ve been on the field together,” Berhalter said of Pulisic and Dest. “So the relationship’s growing. It’s definitely improved from the last time they played together, in terms of the chemistry and how they’re moving. I think if we can get those two guys passing and moving and having the intention to get behind the backline, it would be really difficult to handle, because they’re very quick and very technical players.”

Quality, both individual and collective

In previous USMNT eras, it was conventional wisdom that the United States had to develop a team ethos and structure that could make the group greater than the sum of its parts. As the country produced stronger and stronger crops of talent, the question evolved towards philosophies that could best put them to use.

Now it seems that the best of both worlds is in reach. There’s a detailed, coherent model of play that can elevate the players within it, and players with the quality to take matters into their own hands when necessary. We saw that coherency in the goals scored by Lletget and Aaronson. Dest’s goal was all about individual skill

“How Gregg wants us to play, it is a collective effort,” Lletget said. “But if things are not coming off like you want them to right away, somebody has the ability to do that, like Sergino or Christian or Yunus [Musah] – we have a lot of guys that have a lot of ability, that can pull something off and do something special.”

Jamaica’s goal came off a rapid transition. The play began with an attacking set piece for the US but quickly turned into a jailbreak in the opposite direction, expertly finished by Jamal Lowe. While it ended up as a bit of an asterisk on this occasion, it could be costly in higher-stakes settings where the margins for error shrink.

Calling his project a “continuing process,” Berhalter emphasized that point in his postgame press conference and will surely break down such situations in depth in the days and months ahead. It’s worth watching whether tactical fouling becomes a more prominent response in those moments.

“When I think about major competitions now, set pieces are going to be a factor. We were poor on set pieces tonight,” said the coach. “Transition is a factor, we gave up a goal in transition tonight. So those are things that we still have to improve in. We were very good in our pressing, we were very good on making it difficult for Jamaica, as intended. I think we were pretty good in offensive transition. So there were a lot of good things also. But to me, this is just a work in progress.”

Looking ahead to Northern Ireland

Sunday’s game in Belfast should be similar to what we saw on Thursday, though there will be some differences. The Green & White are generally willing to work without the ball for long periods, a reality given the level of competition they regularly face in Europe.

Coach Ian Baraclough took over the program last summer. After some experimentation, he seems set on a defensive-minded 3-5-2 formation, presenting different shapes and angles for the USMNT to attack.

Members of the Northern Irish player pool do play regularly for competitive clubs across the British leagues, though it’s unlikely that the US will meet a full-strength XI. Their hosts lost 2-0 at Italy in their first match of the 2022 World Cup qualifying cycle on Thursday. They play Bulgaria on Wednesday. That game already looks pivotal for their hopes in UEFA Group C, which also includes Lithuania and Switzerland.

In the run-up to this window, it looked like Berhalter would have to field a much-changed gameday squad. That’s the impact of COVID-19-related travel restrictions across Europe. Some of those players have subsequently become available for this second game. He may still prefer to try out some different personnel in light of the importance of good relationships with clubs ahead of the jam-packed schedule that awaits the USMNT over the next 12 months.