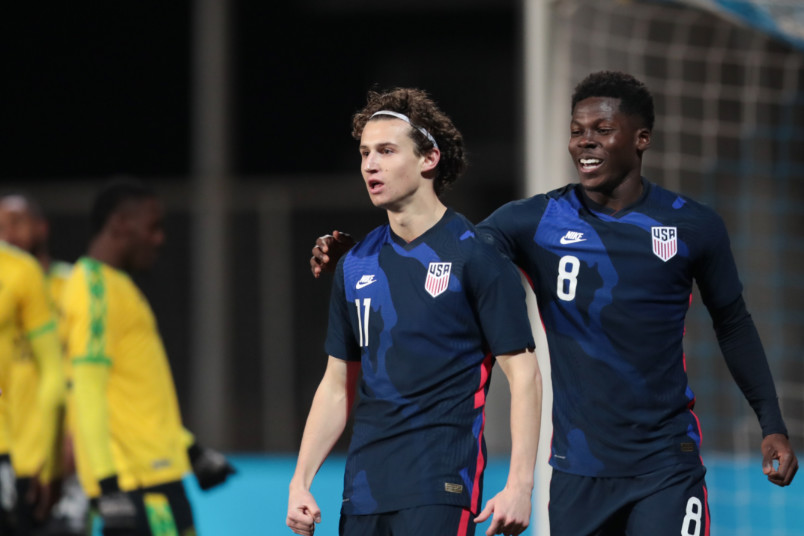 By Jason Davis – WASHINGTON, DC (Mar 26, 2021) US Soccer Players – Fresh off a 4-1 win over Jamaica in Austria, the USMNT heads to Belfast to face 45th-ranked Northern Ireland on Sunday. The game will serve as another opportunity for head coach Greg Berhalter to push improvement for a young, talented group of American players now brimming with a confidence earned against the Reggae Boyz.

The first game of this international window was always going to be the more consequential of the two, even before COVID-19 quarantine and travel restrictions forced roster changes between the games. In Jamaica, the United States faced a future World Cup qualifying opponent. Jamaica did what everyone expected them to do. Physical and defensively-minded for much of the match, they created chances via the counterattack and set pieces.

“We were poor on set pieces tonight,” USMNT coach Gregg Berhalter said “We gave up a goal in transition,” he said. “Those are things that we still have to improve. We were very good in our pressing, we were very good at making it difficult for Jamaica, as intended.”

Applying pressure on the ball and recovering possession high up the field is part of the new look for the United States, facilitated in large part by a group of active, aggressive players in the midfield of the team’s 4-3-3 formation.

While Northern Ireland’s ability to counterattack might not be as scary as Jamaica’s, the task for the USMNT remains the same. Attack the ball and move it quickly, using the athleticism of the center backs to cover for any mistakes. Defending set-pieces is probably even more of a focus because Northern Ireland will be less likely to create chances by any other method.

Berhalter used 17 players against Jamaica, the full complement allowed in a friendly. He played star winger Christian Pulisic for a half and got Red Bull Salzburg attacker Brenden Aaronson 45 minutes as Pulisic’s replacement. Stalwart center back John Brooks went the distance, collecting important reps alongside potential partner Aaron Long in the first-half. Chris Richards entered the game to play next to Brooks for the second 45.

The growing confidence of midfielder Yunus Musah was on display following the teenager’s decision to commit his international future to the United States. Heracles midfielder Luca De La Torre impressed in a 17-minute cameo. Two forwards, Nicolas Gioacchini and Jordan Siebatcheu, also got a taste of the action.

Sunday presents more of an opportunity for Berhalter to run out some of the depth players involved in the camp. Brooks will depart for Germany following the match against Jamaica and fullback Reggie Cannon will return to Portugal. That opens up two places in the back line that could let players who did not feature against Jamaica get on the field.

Northern Ireland lost 2-0 loss to Italy in World Cup qualifying on Thursday with manager Ian Baraclough using a 5-man defensive line. If Northern Ireland uses wingbacks and changes the numbers in midfield, USMNT head coach Gregg Berhalter might choose to play his own back three. He’ll certainly have options even without Brooks. Long, Richards, Matt Miazga, Tim Ream, and Erik Palmer-Brown are all available.

Playing a 3-5-2 would allow the US to move Thursday’s first goalscorer, Sergino Dest, into a wingback role similar to the one he plays with Barcelona. Given his success at club level, playing the same position for his country is something that US fans would like to see. Against Jamaica, Dest lined up on the left side. The possibility of a switch to the right, his more natural position, exists for Sunday. Dest himself seems unbothered by where he plays, though Berhalter did identify a difference while speaking after the win in Austria.

“He’s really strong on both sides,” Berhalter said of his young fullback. “On the left, what you get is what you saw tonight, the ability to come inside and combine and then shoot for himself, create for himself, open up the field dribbling inside. On the right side, it’s more of a vertical type of game.”

With Northern Ireland in-between World Cup qualifiers with a game against Bulgaria on Wednesday, it’s likely the US will face a second-choice group. They already rely on young players in several positions, but the team Baraclough puts out against the Americans could be even younger.

No matter the personnel, Northern Ireland will make the Americans work to break them down. Baraclough talks often about shape. Organization is key to his team staying in the game, putting the pressure on the Americans to unlock their defense.

Does that mean more opportunity for the likes of Aaronson, a player who made an immediate impact after subbing on for the second-half? Berhalter told reporters after the match on Thursday that swapping Pulisic for Aaronson was always the plan, the better to manage Pulisic’s minutes before sending him back to Chelsea. Aaronson could also step into the midfield. Versatility is part of the story for this new edition of the USMNT. Sunday gives Berhalter a chance to test it.

Winning still matters in friendlies. Berhalter knows that victories matter as his team builds momentum into the rest of the 2021 calendar. Outside of a friendly at the end of May just ahead of the Nations League semifinal on June 3, the rest of 2021 features only competitive matches for the US men.

Balancing minutes for first-choice players and making sure he doesn’t overwork them or upset their clubs creates a host of unknowns for what we’ll see against Northern Ireland. The depth now developing in the USMNT player pool means intriguing options. The United States’ new talent-rich era doesn’t stop with its best XI. The calendar will get demanding and very soon.