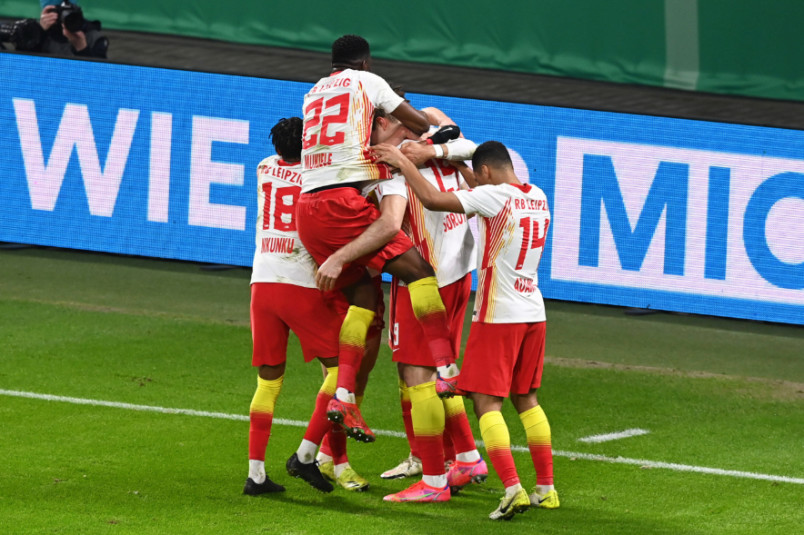 “Of course, we dream of lifting the trophy and we will do everything to do so as you saw on the pitch today,” Poulsen said. “We’re really fired up for the cup, but we still have to win two games and we know that. However, we’ll do everything we can to get back to Berlin again.”

Sergino Dest’s Barcelona needed extra time to knock Sevilla out of the Copa del Rey at the semifinal stage. Barcelona won 3-0 on the night to overturn a 2-0 first-leg deficit. Ousmane Dembele scored in the 12th minute. Sevilla went a man down two minutes into stoppage time. Gerard Pique scored two minutes later to send the game to extra time. Sevilla saw red again in the 103rd minute. Konrad De La Fuente wasn’t in the squad for Barca. Tim Weah subbed out in the 75th minute of Lille’s 2-0 home win over Marseille in Ligue 1. Jonathan David scored in the 90th and added a second goal two minutes into stoppage time.

“My team has a very strong defensive base,” Lille coach Christophe Galtier said. “We are solid, with a goalkeeper of international level in a well-oiled setup. We lack a little more offensive aggressiveness, chances to get the number to score . Will winning like this tonight unlock the players? I’m going to encourage them to play this way to the end.”

Daryl Dike scored in Barnsley’s 3-1 win at Geoff Cameron’s QPR. Dike opened the scoring in the 23rd minute with Charlie Austin equalizing for QPR in the 26th. Alex Mowatt put Barnsley up for good with Carlton Morris scoring in the 57th minute. Dike subbed out in the 56th. Cameron Carter-Vickers scored in Bournemouth’s 2-1 win at Bristol City. Trailing from the 38th minute, an own-goal leveled the score in first-half stoppage time. Carter-Vickers scored Bournemouth’s winner in the 88th.

Matthew Olosunde’s Rotherham United won 2-1 at Sheffield Wednesday. Michael Smith put Rotherham up in the 17th minute. He saw red in the 66th with Olosunde credited for an own-goal in the 82nd minute. Freddie Ladapo scored seven minutes into stoppage time.

Brenden Aaronson scored in Red Bull Salzburg’s 4-0 win at Sturm Graz to advance to the Austrian Cup final. Enock Mwepu started the scoring in the 36th minute, doubling the lead in the 54th. Mergim Berisha scored in the 72nd with Aaronson finishing off the goals in the 79th minute. Matt Miazga’s Anderlecht shutout Cercle Brugge 1-0 at home in the Belgian Cup quarterfinals. Lukas Nmecha scored in the 11th minute.

Paul Arriola didn’t play in Swansea City’s 2-1 win at Stoke City. Down a goal from the 6th minute, Connor Roberts equalized for Swansea in the 19th. Andre Ayew converted a Swansea penalty six minutes into stoppage time. Sebastien Soto wasn’t in the squad for Norwich City’s 1-0 home win over Brentford. Emiliano Buendia scored in the 26th minute. Ulysses Llanez wasn’t in the squad for Heerenveen’s 3-0 home loss to Ajax in the KNVB Beker semifinals. The goals came in the 19th, a 63rd minute penalty, and the 77th. Jonathan Amon’s Nordsjaelland won 1-0 at Aarhus in the SAS-Ligaen. Up a man from the 6th minute, Ulrik Jenssen scored in the 13th.

Also in the soccer news, Juventus announced that they have triggered the purchase clause in Weston McKennie’s loan deal from Schalke 04. The deal cost €18.5m with Juventus potentially paying €6.5m more based on performance. McKennie is now a Juventus player through the end of the 2024-25 season.

In the press release announcing the move, Juventus wrote, “Wes has proven to be a very important resource for Coach Pirlo, having already put his signature on important performances and goals. It’s impossible not to think about his goal against Barcelona at the Camp Nou, or the one in the Derby della Mole – his first in the black and white jersey. It’s also important to note that he is also the youngest midfielder in this league with at least four goals, as well as the best American scorer in Serie A history. In six of the goals he has actively participated in (four goals and two assists), Juventus have always won. It’s because of this, that as of today, he has become an outright Juventus player….”

The Guardian’s Will Unwin talks to USMNT and Boavista defender Reggie Cannon about the real cost of protesting for social justice. MLSsoccer’s Charles Boehm talks to free agent Kei Kamara about looking for a new club for 2021. ESPN Press Room’s Mac Nwulu with the announcement that ABC will show Saturday’s Bayern Munich vs Borussia Dortmund game on national television.