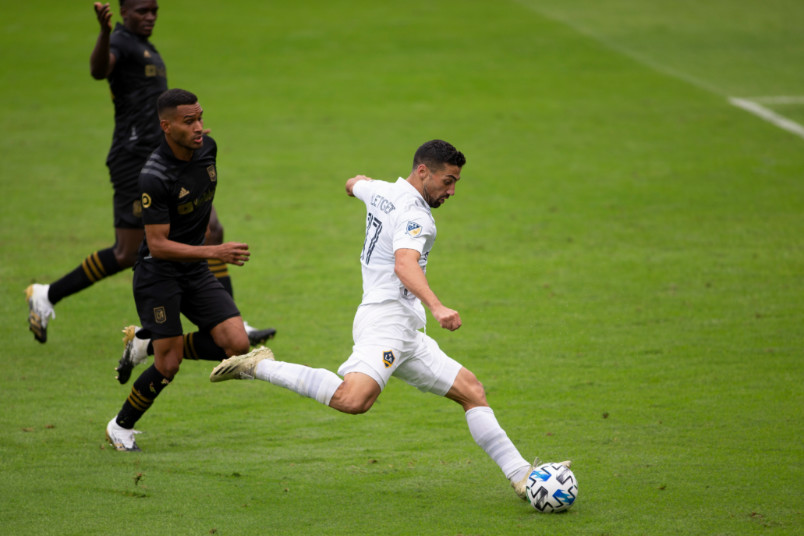 By Jason Davis – WASHINGTON, DC (Mar 3, 2021) US Soccer Players – Major League Soccer will be full of new look teams in 2021. Carrying that label isn’t traditionally a good thing. Short of a re-brand, if you’re promoting a new look, then the poor quality of the old look forced the change. New look teams almost always also fall into the rebuilding category.

If you’ve got a new head coach, you’re probably both rebuilding and sporting a new look. That’s certainly the case in Carson, where the LA Galaxy is starting over for 2021. After underwhelming years under Guillermo Barros Schelotto, the club now has Greg Vanney at the helm.

There’s a lot to like about the decision to hire Vanney for Galaxy fans. The former Toronto FC coach comes with a resume that includes a Supporters’ Shield and an MLS Cup. His history playing for the Galaxy means he has strong emotional ties to the team. Hiring a new coach rarely feels foundational in the modern game, but Vanney with the Galaxy might be an exception.

Vanney inherits a team with significant problems up-and-down the roster. It wasn’t the last coach’s fault that the Galaxy lacked enough competent defenders to compete in the Western Conference. LA carried a lot of problems through 2020, never achieving enough balance to contend.

As preseason begins, questions remain about what tools Vanney will have available to start the campaign. The headline-grabbing saga centers around the quest to sign Cristian Pavon permanently from Boca Juniors, though the work of bolstering the roster with less expensive names is just as important.

One of the club’s holdovers from 2020 that figures to be key to any Galaxy success this season is midfielder Sebastian Lletget. The US international enters his seventh season in a Galaxy uniform playing under his fifth coach, sixth if you count Dom Kinnear’s two stints as interim. While there may be some uncertainty for how Vanney intends to use Lletget, it’s a near-guarantee that he’ll be in the lineup.

Lletget seems ready for life under Vanney. Following the first training session of the preseason on Monday, the midfielder spoke about what the new boss brings to Southern California.

“It’s honestly been really, really good,” Lletget said of Vanney’s start. “It’s like a breath of fresh air. He’s definitely trying to shift the culture of this club and instill his philosophy and create an identity for this club. So far, really good. It’s only day one but I’m definitely really excited to keep working with him and everybody else involved.”

Under Vanney, Toronto FC played an aggressive, attacking style that most often utilized Michael Bradley as a single holding midfielder in front of a four-man back line. In contrast to modern tactical trends, TFC’s fullbacks remained at the back of the formation when the Reds were on the ball, facilitating ball circulation and allowing Bradley to serve as a deep-lying playmaker.

Toronto’s defensive strength came from solid organization and a back four that stayed connected in transition. Toronto used five attackers ahead of Bradley, rotating through a group that included the 2020 MVP, Alejandro Pozuelo. Because Bradley missed time following off-season ankle surgery and a slew of other injuries forced Vanney to mix up his approach in a season impacted by the coronavirus pandemic, last year’s version might not be representative of Vanney’s ideal approach.

What does any of that mean for the Galaxy? So far, the club has upgraded at goalkeeper with Jonathan Bond and left back with Jorge Villafana. They should have Jonathan Dos Santos available to start the season.

Dos Santos will nominally fill the Bradley role. While he’s not the long ball artist that his American counterpart is, he’s an excellent distributor in his own right. Like with Bradley in Toronto, Vanney will need the rest of his midfielder to help the lone holder with defensive work. Currently, the Galaxy look set to play veteran Sacha Kljestan and Lletget in those spots.

Of the pair, Lletget is the younger, more athletic midfielder. While his abilities going forward make him among the league’s top goalscorers from his position, he may need to do extra defensive work.

“I think we are assembling a very good team,” Lletget said. “I think, more importantly, we’re going to have an identity and we know what we’re going to be doing on the field. I think that’s going to be huge for us. Whoever is on the field, I don’t know if we’re signing anybody else if this is going to be the team, there’s a lot of question marks. But even if this was the team, I’m very, very confident and I’m really, really excited for it.”

Maybe it’s just the excitement that comes with a coaching change and the success that seems possible after last year’s disappointing season, but Lletget sounds like a player who believes Vanney will be good for him and the team.

How things go with the Galaxy will have something to say about Lletget’s fortunes with the national team in 2021. Head coach Gregg Berhalter has asked a lot of Lletget, even though the limited schedule that the USMNT was able to play at the end of the last calendar year and into 2021. Trust is not an issue.

Should Vanney ask Lletget to do more defensive work, Lletget’s USMNT stock could rise under the National Team’s similar system. March friendlies in Europe will come before the MLS season kicks off in mid-April, but the Galaxy will be in full swing by the time Berhalter considers his options for June’s Nations League finals.

From there, there are the Gold Cup and World Cup qualifiers. Without a full dossier on how Vanney intends to use his dynamic midfielder, it’s difficult to imagine the new regime in Carson being anything but a good thing for Lletget’s chances to feature for his country.

Ironically, success with LA and the firm place in the USMNT setup it could mean Lletget missing time with the Galaxy in 2021. The MLS schedule is still unknown, but logic says it will be compact. That probably means few breaks for the FIFA windows. Vanney setting up Lletget to succeed will help the Galaxy, but it will also make his job harder when Lletget leaves for international duty.

The new look in LA holds promise. There’s plenty of work to do and plenty of unknowns with the roster still in flux, but the optimism makes sense to a point. Pulling off new looks is never easy, even in a league like MLS that seems built for the single-season turnaround. This one will be no different.