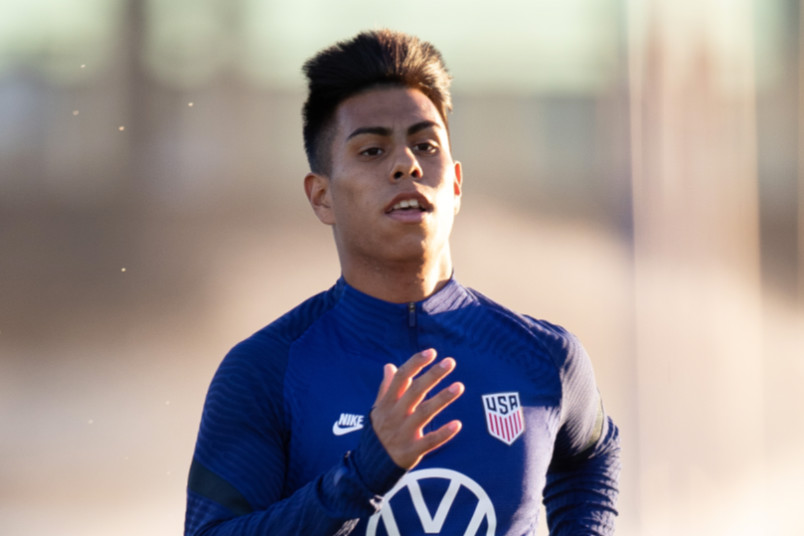 By Charles Boehm – WASHINGTON, DC (Mar 11, 2021) US Soccer Players – Tyler Boyd, Sergino Dest, Yunus Musah, Owen Otasowie, Andrés Perea, Jesus Ferreira, Daryl Dike, Ayo Akinola, Efra Alvarez, Julian Araujo, Frankie Amaya, David Ochoa, Marco Farfan. It’s not quite a USMNT roster sheet, and not all of them have definitively committed to the program. It is a rundown of some of the dual-national players recruited or retained under Gregg Berhalter’s tenure. Another name may soon join that list. French-Cameroonian-American striker Jordan Siebatcheu, currently on loan from Rennes to Switzerland’s Young Boys, hopes to be called in by the United States.

It’s been a little more than three years since Jonathan Gonzalez switched his allegiance from the US to Mexico. That sparked myriad recriminations about US Soccer’s approach to this area. Those discussions were especially intense in the wake of the painful disappointments of 2017.

This is an ongoing topic with no finish line. No country is so lucky as to bag every single one of its dual-eligible players. Meanwhile, diversity remains a pressing issue in general for US Soccer. That includes player recruitment and retention. Still, it’s only right that those of us who justifiably questioned the Federation’s shortcomings back then acknowledge the signs of progress we’re seeing.

“I am very quick to crush US Soccer for a lot of their deficiencies, but I have to give US Soccer a lot of credit recently,” retired USMNT striker Herculez Gomez told USSoccerPlayers.com last month. “Gregg Berhalter has been very, very vocal about his recruitment of dual nationals. The US Soccer Federation is trying to go about things the right way with this diversity task force. We still don’t know who’s in it, we still don’t know what it’s about, but at least they’re trying.”

There’s no denying that wider public perception of the USMNT, fairly or not, has evolved significantly over those three years. The setbacks of the 2018 World Cup cycle cast a long shadow. The exciting youth movement headlined by the US standouts performing well in some of Europe’s top leagues helps to push past that. Few recruitment tools are as effective as winning matches and playing stylishly. Berhalter himself has spoken of making the program into one that players want to be part of, a process much bigger than one person or coaching staff.

Raw numbers alone suggest that the nation’s huge and soccer-centric Mexican-American population remains the biggest space of competition for dual nationals. That tug-of-war has ebbed and flowed over the decades. It was fascinating to see the Mexican federation hire USMNT great Hugo Perez in the fall of 2019 as a US-based scout with an explicit focus on dual nationals. Even more so was Perez’s subsequent public framing of the choice facing such prospects in light of the US player pool’s European gains.

“In the long run it will be difficult for those [Mexican-American] players, because right now the United States has players who play for Barcelona, Chelsea, Juventus and the coach will give priority to those who play in Europe. If you think about a World Cup, Mexico has a very good program and the style that the Latin player has is more adapted to that of the Tricolor,” Perez, who recently moved on to take over El Salvador’s U-23 coaching job, told ESPN last year, suggesting that the US are just as interested in denying El Tri talent as they are in claiming it for themselves.

“If I were in the shoes of those players and I see the United States roster, I see the potential they may have, but they have not shown it at the national team level, in the end Mexico continues, for me, as the power of North America, with the US behind.”

Even accounting for Perez’s job description at the time of the remarks, there’s a noteworthy shift here. It suggests that the rise of prominent US players to big global stages has reached the point that a representative of Mexico implies that El Tri can offer rising Latino talents in the US an easier road to playing in a World Cup. It might be a stretch considering that Mexico has an established domestic youth development pipeline of its own. Yet, the choice of words deserves contemplation.

Gomez suspects that both federations still lack a critical mass of personnel with first-hand perspective on the nuanced nature of Mexican-American identity, who can connect with these young players on that level.

“US Soccer and Mexican soccer still haven’t found the people who have common ground with these kids,” he said. “Some people have a very hard time dealing with why it’s even a choice: If you are American, you’re American, if you are Mexican, you’re Mexican. It’s very cut and dried to them, they don’t realize what goes into being a dual national and the love and appreciation one can have for two different countries, two different cultures, how appreciative and how at-home they can feel in two different settings. And until you’re in that position, you will never understand. It’s that simple. You just won’t understand. It’s a very difficult choice.”

Many have written of the importance of personal and behind-the-scenes communication in this process. Lately, we’ve also seen some very public outreach as well. LA Galaxy homegrown Efrain Alvarez might be the most hyped Mexican-American prospect at the moment, an inventive attacker who switched from the US to El Tri early in his youth international career.

Mexico boss Tata Martino has spoken highly of the player, who’s still just 18, and his commitment to the country of his parents’ birth. That didn’t stop Berhalter from inviting him to take part in the USMNT’s December camp, albeit without the permanent one-time switch of allegiance required for him to play in the friendly vs. El Salvador. Last month US U-23s coach Jason Kreis stepped up the chase another notch by including Alvarez in his preliminary roster for Concacaf Olympic qualifying, creating the rare situation of the same player on two teams’ lists for the same tournament.

Accepting Kreis’ invite would have forced Alvarez to commit to the United States for good. It’s understandable that the teenager elected to postpone that decision, even if he did not make the cut for Mexico’s Olympic qualifying squad. With their assertive courtship, the US coaching staff may have sent a message to him and others who may find themselves in a similar boat.

“You have two national teams who are openly fighting for him,” said Gomez of Alvarez. “It’s a game changer, because I think finally, both are recognizing the importance of a set type of player.”