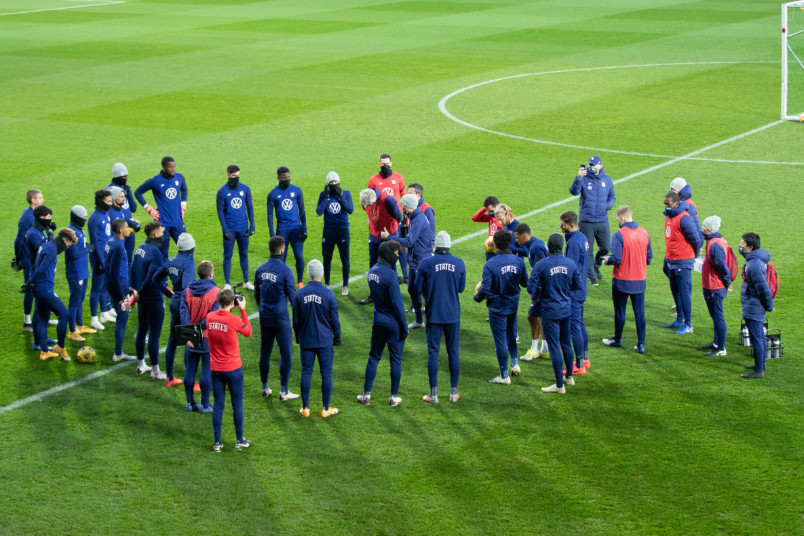 By Charles Boehm – WASHINGTON, DC (Mar 18, 2020) US Soccer Players – We now know the USMNT squad for this month’s European friendlies vs Jamaica in Austria and Northern Ireland. It’s just the second time coach Gregg Berhalter has been able to call on his full player pool since the start of 2020. It’s also the last full international window he’ll have for evaluation and experimentation before the onset of fully competitive matches. That starts with the Concacaf Nations League semifinal against Honduras on June 3, kicking off an intensely busy 10-month period packed with big games.

The COVID-19 pandemic is responsible for much of that, and it continues to loom large. That’s a good place to start when analyzing this week’s developments.

When it comes to planning and logistics, the list of players and other information announced on Wednesday by the US Soccer Federation is just the tip of the iceberg. That’s because Berhalter and his staff face a complex web of circumstances around their European-based players.

While all clubs are nominally required to release players to national teams during this and all FIFA windows, the persistence of the pandemic has complicated that. Some nations are limiting or banning travel to what are considered high-risk outbreak areas of the continent, or imposing quarantines on those who do. This applies to Great Britain, limiting seven of the 26 USMNT call-ups from traveling to Belfast for the second match of the window against Northern Ireland.

This is all over and above the new baseline of careful mitigation protocols like distancing and disinfecting for each and every team gathering. Then there’s the constant need to carefully manage relationships with US players’ home clubs.

“This is just part and parcel of what you have to deal with in both international soccer and COVID times, so we’ll deal with it and we’ll put a team on the field that will be successful, and continue to develop in regards to a number of individuals,” Berhalter said in a media call on Wednesday.

Monday brought the good news of Yunus Musah’s commitment to the program. That focused attention on the positivity and inclusiveness of the team and its culture in recent years. Combined with the USMNT’s promising displays on the field, that appears to be making it an appealing place to be for players.

Fans can only find that encouraging. This group genuinely seems to enjoy spending time together and working towards ambitious goals. It can mean much more than just a facet of the recruitment of dual nationals, too.

Players competing in the top echelons of the sport face enormous mental and psychological challenges as it is. The particular surroundings of pandemic soccer ratchet that up even further. Providing a positive change of scenery and some familiar and welcoming faces on international duty is a win-win for both the USMNT and its individuals.

“Being with the national team is so fun, you get to reunite with all your buddies. But the other thing is the mental side of it, just thinking about what these guys are going through in Europe,” said Berhalter in an interview with SiriusXM. “I think we underestimate it a little bit, the fact that these guys are going from the training ground to home and that’s it, everything’s locked down. And they’re playing every three days, in front of no fans, and it’s difficult. Mentally it’s difficult.”

Readers don’t have to be too old to remember times when depth in key positions was a real concern for the USMNT. Jozy Altidore pulled up with a torn hamstring in the first match of the 2014 World Cup campaign, to cite one memorable example. That led then-coach Jurgen Klinsmann to significantly shuffle his lineup and the responsibilities within it, as he didn’t feel he had an ideal like-for-like strike replacement on hand.

That picture has changed dramatically just in the past year or so. There’s now a fairly long list of contenders at that #9 role that’s so pivotal to the USMNT attack, as well as plenty of wingers and creators capable of providing service and combination play. The depth chart looks solid basically across the pitch, even at traditionally challenging spots like left back. The current coaching staff can analyze and compare data points across regular playing time in big leagues and competitions.

The rate of players’ individual advancement seems to be holding steady, too. In the barely three months since the program’s last full gathering, four players on the current roster – Brenden Aaronson, Daryl Dike, Bryan Reynolds and Chris Richards – made moves to new leagues or clubs that offer new challenges and promising opportunities to shine.

A chunk of the player pool is unavailable for senior-squad selection this month due to their participation in the Concacaf Olympic qualifying tournament in Mexico. The average age of the USMNT roster is still just a shade over 23 years of age, with an average of 11 caps each.

It’s hard to write a more incisive and compelling description of the program’s youth movement than that. More and more US players are moving into more and more prominent roles on bigger and bigger stages at younger and younger ages. There’s reason for hope that this is a cycle where young Yanks earn the trust of their clubs and coaches. That would fuel a positive reputation for the country’s exports and stoking increased demand for them.

If this does unfold, Berhalter and his eventual successors have the luxury of picking the 20 to 30 most suitable, in-form players at any given juncture to bring into US camps, then assess in a highly competitive environment. When that kind of crucible coexists alongside that team culture, you have the makings of a legitimate contender.