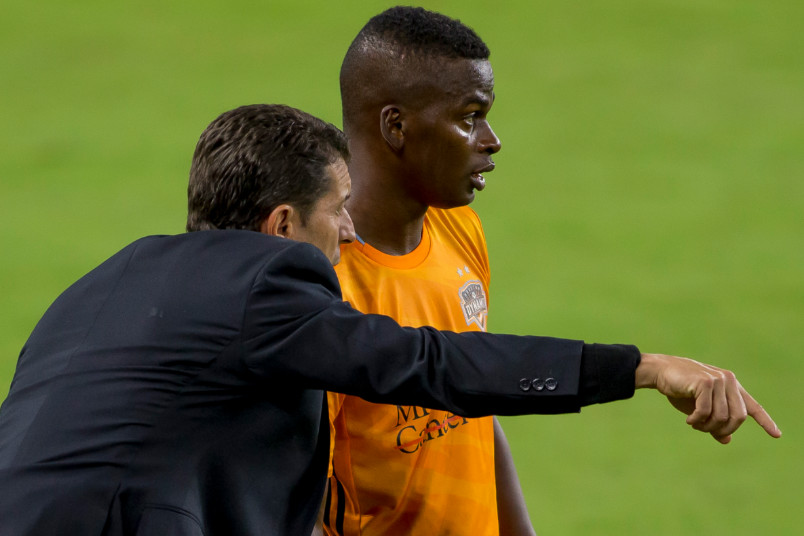 By Jason Davis – WASHINGTON, DC (Mar 24, 2021) US Soccer Players – The 2021 season arrives for Major League Soccer behind a vanguard of uncertainty as formidable as any in recent memory. 2020 wreaked havoc on preconceived notions and reasonable expectations while laying waste to rosters throughout a stop-start campaign. It’s impossible to know what might have happened in the absence of the pandemic, but it’s not crazy to imagine things would have been very different.

That means while MLS in 2021 has a few select favorites, plenty of teams are veritable unknowns. For clubs that were hoping to use 2020 as a platform for rebuilding, was there enough runaway for 2021 to be a breakout campaign? “Off the radar” for fans in 2021 could include three-quarters of the league. Still, a few teams aren’t getting as much interest as they probably deserve heading into the season.

Let’s start that list with the Houston Dynamo. Head coach Tab Ramos already knows that Houston needs to present its bona fides as a potential contender before getting more respect. If nothing else, the Dynamo has the potential to surprise this season because few are counting them even among the possible dark horses.

Ramos endured a difficult season during his first year in Houston. Despite his lengthy resume as a player and his experience coaching in the US Soccer youth setup, the 54-year-old is still green as a senior team manager. Houston’s “work-in-progress” involves both the roster and its leader.

The Dynamo added a few intriguing pieces to a team that finished nine points adrift of the playoffs last year. Augmenting an attack led by Colombian star Darwin Quintero will be former Union and FC Dallas winger Fafa Picault, ex-Dallas and Montreal forward Maxi Urruiti, and Tyler Pasher, last with Indy Eleven of the USL Championship.

Pasher is an intriguing addition. The former Newcastle United academy player struggled during a short stint in MLS with Sporting Kansas City but racked up 23 goals and six assists in 50 appearances in Indianapolis. Pasher’s record in top division stops, including a trial with Toronto that ended without a contract offer, might not suggest he’ll be a hit. However, he’s a proven goalscorer in the second division. That suggests it might be his time to show he can score goals in the topflight.

If Pasher does get playing time and goals in Houston, it could also serve as evidence that there’s talent on offer in the USL Championship. MLS clubs are traditionally shy about bringing players up from the lower divisions in North America despite the typically low cost.

The Dynamo also changed things up in midfield. The club acquired starting-level talent in former Galaxy man Joe Corona through the Re-Entry Draft even though Austin FC had already picked Corona in the expansion draft. The mini-controversy should do wonders for the budding Texan rivalry while giving Ramos a two-way option in the center of the field. Houston executed a trade with the New York Red Bulls for veteran center back Tim Parker, who should take up a leadership role alongside Maynor Figueroa.

Houston still isn’t spending enough to keep up with the presumed favorites in the Western Conference. The club currently has no Designated Players on the roster. That doesn’t mean they can’t make significant improvements over last season. If the Dynamo decides to make a move in the summer for an elite player, the work already done over the winter will certainly help.

That could be at the expense of two other Western Conference teams. Real Salt Lake is still in turmoil following the drama of 2020 around soon-to-be-ex owner Dell Loy Hansen and didn’t make many moves over the winter. It’s a situation that’s tough to call in March.

San Jose spent the offseason dealing with rumor that head coach Matias Almeyda is leaving the club for greener pastures. Almeyda remains and the club added several players that have played with him in the past to a team that made the playoffs in 2020. No one would mistake the 8th-place finish for a triumph, but the budget-conscious approach in Northern California makes for small margins between success and failure.

There does seem to be a looming inevitability that Almeyda’s time in San Jose is short. Perhaps the most passionate head coach in the league, his team lives and dies by his aggressive philosophy. The likes of Eric Remedi, acquired from Atlanta United, and Luciano Abecasis, arriving from Libertad in Paraguay, don’t stand out as big signings. If they help execute Almeyda’s plan, perhaps the Quakes can improve upon their 2020 finish.

San Jose still has USMNT midfielder Jackson Yueill, one of the brightest young players at his position in MLS. The addition of attacking midfielder Javier “Chofis” Lopez in front of Yueill should make the club more dangerous going forward.

If anyone needs another reason to pay attention to the Quakes in 2021, the season figures to be the last of Chris Wondolowski’s storied career. The all-time leader in goals in MLS history postponed his retirement after the strange 2020 campaign and might have just a bit more magic left in those short runs he used to turn himself into a legend.

This is MLS, and anything can happen. Columbus and LAFC will be the favorites, and rightfully so. Parity still exerts a significant influence over this league. It’s almost not worth the reminder that there will be surprises.