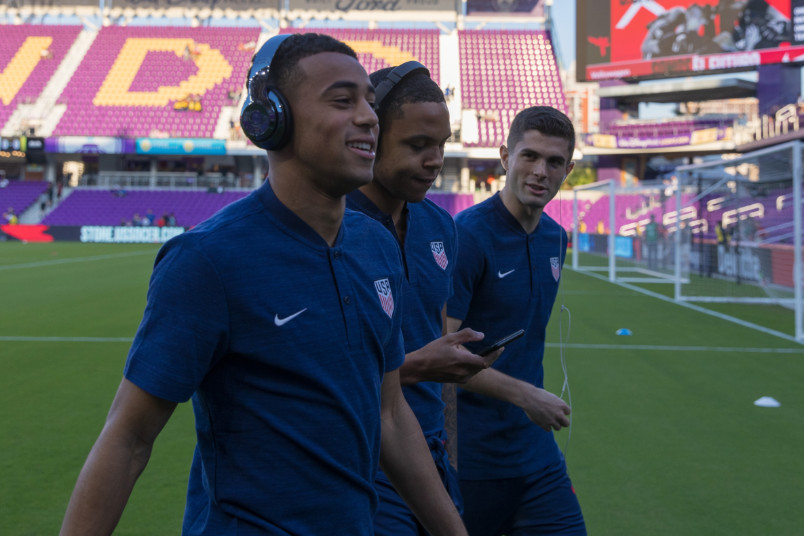 By Jason Davis – WASHINGTON, DC (Mar 17, 2021) US Soccer Players – “With great power comes great responsibility,” or so the saying goes. These days, a new generation is learning about that axiom thanks to the exploits of Spiderman within the ubiquitous Marvel Cinematic Universe. A twist on that principle for a new generation of American soccer players might be, “with great talent comes great expectations.”

Perhaps for the first time in the modern history of the United States men’s national team program, there is real hope for succeeding on the international stage. The rising group of young stars that play for Champions League contenders alongside emerging talent makes this, without argument, the most talented USMNT ever.

On paper, that is. As is always the case, the line between “hope” and “expectation” is a thin one. “Hope” quickly becomes something a bit more troublesome when it morphs into a pressure-laden expectation. It’s always about the World Cup. Regional championships matter, but no one judges a team by Gold Cup trophies.

It’s important to acknowledge that there’s no consensus on expectations for the USMNT. Some remember the earliest days of the program’s reboot. For others, it’s the 2002 World Cup quarterfinal run that serves as a reminder of just how difficult it is to progress deep into the tournament.

Then there are a few, largely made up of the youngest generation of fans, who have no context for USMNT success. In the soccer fan experience of someone born at the turn of the century, the US has reached the round of 16 twice and failed to qualify. What the USMNT should manage in the next edition of the tournament is difficult to pin down.

America’s soccer efforts have mostly been “interesting, but innocuous” in the sense the team often met expectations but topped out shortly after the group stage. While World Cup opponents often boasted at least a handful of players playing for world-renowned club teams, the United States arrived at tournaments led by a sprinkling of Premier League and Bundesliga players with Major League Soccer names filling the gaps.

It’s not that those teams weren’t capable. It’s just that it wasn’t obvious to anyone what they might be capable of. Even in years when pundits expected the US to make some sort of run at the tournament, 2006 being the most notable example ranked 6th in the world, the balance between disappointment and resignation never tilted much in either direction. After the “failure” of US Soccer’s overly ambitious Project 2010 project, an overcorrection towards negativity took root.

Yunus Musah’s decision to commit to the USMNT on Monday fueled a new round of debate about expectations for the team. With the 18-year-old Valencia player’s name added to the list of young talent in the pool for head coach Gregg Berhalter, the hype train got a new batch of fuel.

Musah’s announcement highlighted the feel-good vibe around this iteration of the USMNT. He specifically mentioned how included he felt joining the group for European friendlies back in November when he started games against Wales and Panama. In 2021, the camaraderie felt by Musah and his new teammates is in the public eye via social media.

Putting together a potential USMNT lineup at the moment is enough to make even the most jaded fans giddy. Musah joins a team that includes Christian Pulisic of Chelsea, Weston McKennie of Juventus, Tyler Adams of RB Leipzig, Sergino Dest of Barcelona, Giovanni Reyna of Borussia Dortmund, and Tim Weah of Lille. All of whom participated in the 2020-21 Champions League knockout stage.

Digging a little deeper into the current circumstance of each player might reveal temporary reasons to dampen the expectations. Regardless, the USMNT will be richer in talent as it attempts to qualify for the 2022 World Cup.

So what is a fair expectation of this group of players as they gather in Austria later this month? Some would already pencil them in as outside World Cup contenders, with the expectation that this group will grow into an international power. Anyone who wants to believe in the potential of the young USMNT might agree. Anyone who knows a bit about the international game would never sign on to such a statement.

No one, particularly Americans, wants to lean into a defeatist mentality and state that winning the World Cup is “impossible” in the near term. In a “many worlds” interpretation of the universe, there could be one in which America brings home a World Cup sometime soon. Center back Chris Richards embodied the “can do” spirit of America last week when he said that this group of American players wants to be the first to win a World Cup when the tournament takes place on home soil in 2026.

All credit for ambition, but the rest of the world didn’t stand still while the United States was getting better. A peek at the up-and-coming talent for the regular contenders is enough to sober even the most optimistic USMNT fan. What is always true, no matter how good a team looks on paper, is that luck has a major role to play at World Cup level.

Just ask Germany. Die Mannschaft took home the World Cup trophy in 2014, bulldozing the competition on the way to a championship in Brazil. It then failed to progress from the group stage in Russia four years later through a combination of bad form, bad luck, and poorly timed injuries. Even the best soccer playing countries in the world struggle on occasion.

There’s plenty of reason for excitement over what’s coming for the USMNT. Expectations should go up, even if we’re not exactly sure by how much. Winning the World Cup is always the goal, but that doesn’t mean not winning the World Cup represents failure. With great talent comes great expectations. Step one is getting back to the World Cup.