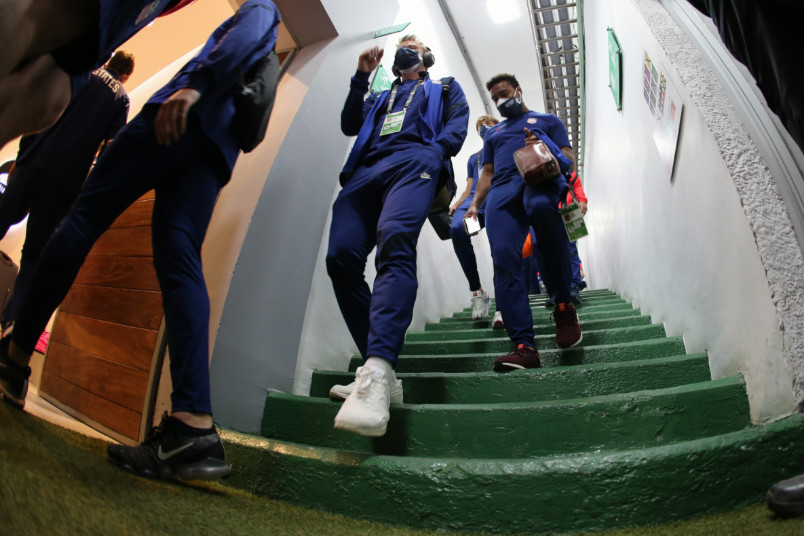 Friday’s soccer news starts with the USMNT learning who they’ll need to beat to qualify for the Tokyo Olympics. Honduras and Canada drew 1-1 to conclude group B with Honduras winning the group on a tiebreaker. They play group A runners-up USA on Sunday (6pm ET – FS1). Canada faces Mexico in the late game. The semifinal winners advance to the Olympics.

What Jason Kreis and his squad should expect is what Honduras showed against Canada in the second-half. Canada was willing to absorb pressure rather than pushing for the win, and Honduras provided plenty. In full control of the attack, they couldn’t get their shots to fall. That flattered Canada’s defense.

The USMNT should provide more of a challenge, certainly the toughest matchups Honduras has faced in this tournament. What the USMNT showed in the second-half in their group A opener against Costa Rica should resonate with Honduras. That’s much closer to what they’ll likely see from the United States than what was on display in the 1-0 loss to Mexico on Wednesday.

For the USMNT, this is an opportunity to show that they can make the necessary adjustments to get a result. The tricky part of any final group stage game where both teams have already advanced is continuing to play flat. The USMNT hasn’t been a strong first-half team so far, but that ability to turn games around in the second-half has gotten them within a game of qualifying. That counts, the type of tournament ball that builds experience.

Speaking of which, the senior squad found their rhythm in what turned out to be a trickier than expected friendly against Jamaica. The 4-1 score-line doesn’t flatter Jamaica, but the final two goals came after the onslaught of subs. That doesn’t mean as much in the new era of extended substitutions some leagues put in play to help alleviate the demands of the schedule. Still, the USMNT showed it could keep control of what was a close game. That’s important as players return to the squad.

Christian Pulisic on the field, Gio Reyna’s play, and Sergino Dest’s opening goal showed what many hope to see from the USMNT. Add in Weston McKennie this summer, and that’s the kind of explosive skill players that could reset expectations in Concacaf. They’ll have plenty of opportunities before the start of World Cup qualifying, something that’s becoming its own story in the region.

USMNT coach Gregg Berhalter started talking about the unlikely summer schedule almost immediately after Concacaf moved the Nations League finale from March to June. That was for a good reason. The run of games through the World Cup and hopefully into the Olympics provides more than enough opportunity for players up and down rosters.

MLSsoccer’s Matthew Doyle on what we learned about this USMNT squad from the Jamaica friendly. The Athletic’s Paul Tenorio with Dest moving to left back. The Washington Post’s Steven Goff puts a friendly win into perspective with an eye on that increasingly difficult schedule. ESPN’s Jeff Carlisle points to what we saw from the substitutes.