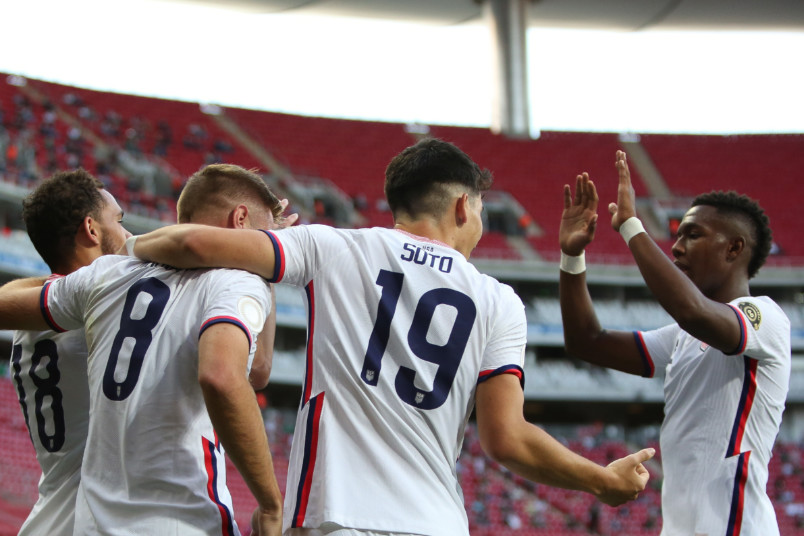 Monday’s soccer news starts with the United States and Mexico Under-23 teams advancing to the Concacaf Olympic qualifying semifinals. The two play each other on Wednesday (9:30pm ET – FS1) to close out the group A schedule. Mexico holds the tiebreaker going into the group stage finale after a 3-0 win over Costa Rica. They’ll meet the top two group B teams in the semifinals with the winners advance to this summer’s Olympics.

The USMNT took over in the second-half against the Dominican Republic in a 4-0 win. Jackson Yueill put the USMNT up in the 61st minute with Hassani Dotson adding goals in the 73rd and 78th minutes. Djordje Mihailovic finished off the scoring in the 90th minute.

Staying on the topic of the USA and Mexico and adding Canada to complete the North American zone, FIFA president Gianni Infantino spoke about an MLS/Liga MX merger. Reuters’ Simon Evans relayed Infantino’s comments. “Any discussion about organizing such a competition, of course respecting the rules of member associations and FIFA and with the agreement of all stakeholders, any discussion in that respect, is interesting and we see that in a positive light.”

That’s not exactly the standard response to cross-border leagues with established domestic topflights. FIFA’s normal stance is to enforce geographic borders preventing wholesale changes to soccer’s map. How that might change or what it means for other potential mergers is a question that FIFA now apparently finds as intriguing as the rest of us.

Infantino joins MLS and Liga MX executives in seeing that upside, also saying, “I think the potential in the United States and Mexico is enormous, each country by itself. But of course if you could bring those two together that would be incredible and that could quite well be the best league in the world.”

MLS’s “League of Choice” hasn’t exactly shot it into the upper echelon of the world’s soccer leagues. Merging with Liga MX while maintaining the same spending controls would create an interesting contrast. The same one we’ve watched play out at Concacaf Champions League level for a couple of decades. Altering the financial restrictions could happen without involving Mexico, something that continues to be a sticking point for some potential fans.

How Major League Soccer handles its own business is still the big picture step. Loosening single-entity has already happened, allowing for some teams to spend their way into contention. That’s normally how it works in soccer leagues across the world. Without an international rethink for how soccer teams buy and pay players, MLS as a business doesn’t seem likely to try to play that version of the game. If anything, becoming more of a selling league sends a clear message to European clubs ready to spend. That’s good news for player development schemes and recruitment, but there are plenty of examples of where that leaves selling leagues.

It’s the spending by MLS teams on players up and down the roster that’s going to make the difference. That’s been clear before the league debuted in 1996. The brief free-spending ways of the North American Soccer League in the late 1970s still looms for soccer in this part of the world. It shouldn’t, holding the league back from risking payrolls in pursuit of a stated goal. If MLS wants to be among the best leagues in the world, we already know what that costs. So do the members of those other leagues already in contention for that title.