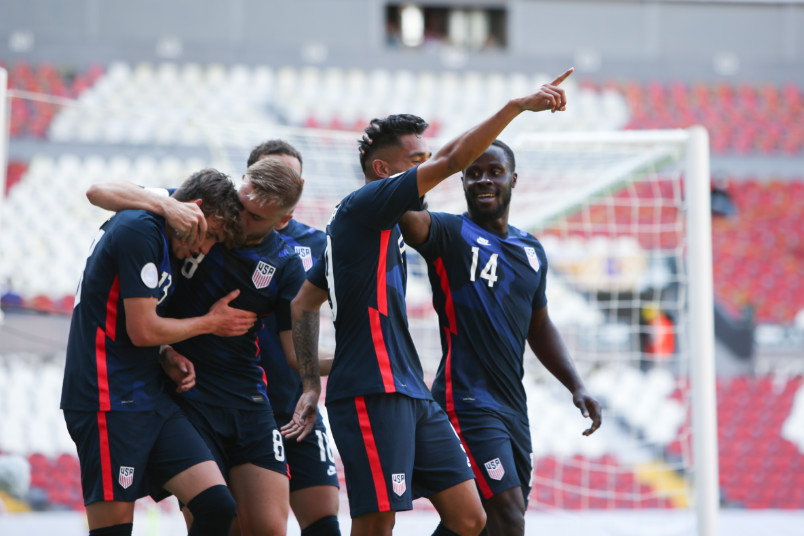 Friday’s soccer news starts with the USMNT U-23s shutting out Costa Rica at Concacaf Olympic qualifying. Jesus Ferreria scored the game’s only goal in the 35th minute with David Ochoa making eight saves to keep the clean sheet. Costa Rica had the lead on shots on goal to the USMNT’s two. The USMNT plays the Dominican Republic in their second group stage game on Sunday (7pm ET – FS1). In the other group A game, Mexico beat the Dominican Republic 4-1 to take the group lead on goal difference.

“It wasn’t great,” USMNT U-23 coach Jason Kreis said. “It was an important result for us, but I would say that we would’ve hoped to have gotten that result in a little bit of a better fashion. I think we would’ve hoped that we could’ve been better on the ball and made better decisions and maintained the tempo of the game better…. Part of guys not playing matches is that it’s not just about fitness it’s about their touch on the ball.”

Meanwhile, Cameron Carter-Vickers’s parent club Spurs is out of the 2020-21 Europa League following a 3-0 loss at Dinamo Zagreb. Mislav Orsic’s hat-trick took care of Spurs’ 2-0 first-leg lead, a loss in need of a response from manager Jose Mourinho.

“I don’t just feel sad,” Mourinho said. “Sad is short for what I feel at the moment. I know that football is football and in football, anything can happen and I’m humble enough to congratulate them for what they did – it’s also because of things like this that football is a beautiful game but sad is not enough for me, I feel very hurt for my personal pride and I think that our performance is unacceptable. Big heart and big determination beat us so if we think that big heart is not part of football, we are wrong because big heart is part of football and it was what they did.”

Credit Mourinho for not shifting to crisis management in the kind of moment that deserves it. What Dinamo Zagreb did at home is part of the point of playing home and away even in front of empty stands. One leg isn’t supposed to be enough, with the quarterfinals beckoning as the reward deserving of risk. Otherwise, it’s exactly what the elite clubs used to the Champions League seem to want and the knockout stages of these tournaments turn into foregone conclusions.

Fair play for what it’s worth, but this is a moment that compounds Tottenham’s three Premier League losses in a row in January and two in a row in February. Dropping the North London derby to Arsenal on Sunday has Spurs 8th in the table, a point behind Everton and 6th-place Liverpool.

What this means for Spurs may end up being similar to the situations for other Premier League clubs that expect to be in the top four but aren’t. That’s an intriguing list this season, with Spurs ownership facing the same scenario as the rest. Given the new-found parity that’s likely courtesy of the lack of fans as much as clever spending or tactical nuance, how much weight does anybody give results right now?

There’s no clever answer to that in the moment. It’s the big picture issue looming over rushed decisions that could end up costing money, time, and league position when some form of normal finally returns.

Moving to the soccer news, MLSsoccer’s Charles Boehm reviews what the USMNT U-23s did against Costa Rica. ESPN FC’s Jeff Carlisle’s match report from USMNT vs Costa Rica. SI’s Avi Creditor with the three points for the USMNT to start Olympic qualifying. Eurosport with Spurs goalkeeper Hugo Lloris’s response to the exit at Dinamo Zagreb. The Telegraph’s Michael McGrath asks about Mourinho at Spurs.