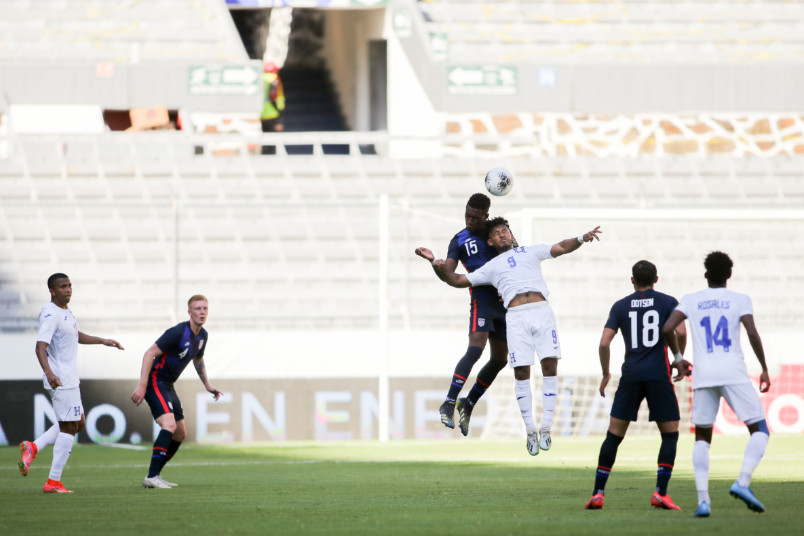 Monday’s soccer news starts with the USMNT U-23s exiting the Concacaf Olympic qualifying tournament following a 2-1 loss to Honduras. The United States fell behind just before halftime. The US got caught trying to play out of the back in the 47th minute, making it 2-0. Jackson Yueill pulled a goal back for the USMNT in the 52nd with a shot from distance.

Finishing with 63% of the possession, the USMNT pressed heavily in the closing minutes of the game but couldn’t come up with an equalizer. Honduras finished with 14 shots, putting six on goal. The USMNT finished with eight shots with two on frame.

“Obviously we’re devestated, absolutely devestated.” USMNT U-23 coach Jason Kreis said…. “We all wanted this so badly for so many different reasons. And I think, could be, sometimes when you want it too bad, you put yourself in the position where you can’t perform to the level needed. At the end of the day, I just don’t think we had enough.”

The problem with the U-23 setup is that it only really exists for Olympic qualifying and the Olympics themselves. Mixing in U-23 camp with the senior squad gave the group more time, but the entire purpose of the program is qualifying and participating in the Olympics. There’s no reason to bring the squad together after that cycle ends.

So this eventually switches from disappointment to what the program as a whole learned about this group of players. In terms of how they might contribute to the senior squad, that requires doing enough to get senior squad minutes. Jackson Yueill’s shot from distance is something that should get the attention of the technical staff.

The FS1 commentators and studio pundits stressed that not just because it was the only USMNT goal. Northern Ireland did the same late against the senior squad earlier on Sunday. It’s tough to defend against the unlikely shot, destabilizing even the best defenses. Not as many players as you’d think are willing to try. It’s a spotlight move, something that can easily backfire. Finding players willing to weigh that risk vs reward in real time can change games.

SI’s Brian Straus with the big picture for missing out on the Olympics. The NY Times’ Andrew Das with what happened to the USMNT against Honduras. MLSsoccer’s Charles Boehm lists his takeaways from Olympic qualifying. The Athletic’s Sam Stjeskal stresses how the USMNT played throughout the tournament.