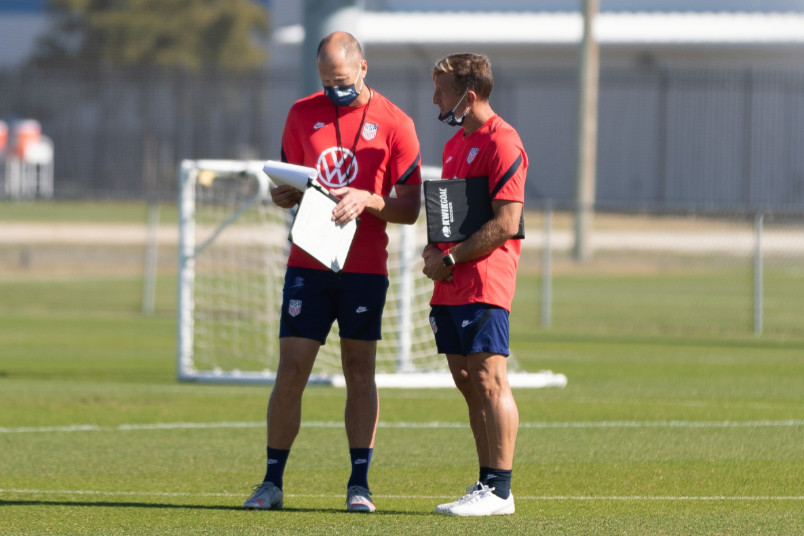 By Charles Boehm – WASHINGTON, DC (Mar 4, 2021) US Soccer Players – A massive year for the USMNT begins in earnest later this month with Under-23 Concacaf Olympic qualifying in Guadalajara, Mexico. It will mark the first competitive match for either team in 2021, which will include at least 17 games of consequence and possibly quite a few more, should the younger side book a place at the Tokyo Summer Games and the senior squad make a deep run at the Gold Cup as usual.

It makes sense to lump the two teams together here. Coaches Gregg Berhalter and Jason Kreis have explicitly sought to integrate them with joint camps and shared tactical and stylistic concepts. The lines may blur more than usual this year with so many games and so much young talent in the player pool.

So even if you’re a USMNT fan with only a passing interest in the U-23s for some reason, their tournament bears attention. Because the choices that Kreis and his staff make, and the results that follow, could offer clues about the full team’s future as well.

One of the key questions facing the Olympic group lies in central midfield. In recent months Berhalter has generally shifted from a 4-2-3-1 starting point to a 4-3-3 formation, with a higher back line and more commitment to pressing. The risks and rewards of that approach arguably make the engine room even more pivotal than usual. The selection of the players to fill those three slots, and the specific tasks they’re assigned, are hugely influential on the collective.

The options are myriad and often nuanced. Berhalter has spoken of the different ways particular players “interpret” their positional roles. Here’s an admittedly simplified summary. He and Kreis could field a defensive #6 behind a box-to-box #8 with a liberated #10 working closest to the striker. Two 6s can take a deeper, more defensive look that flips the triangle. Or, a single 6 could sit in support of twin 8s roaming in advanced positions.

We’ve seen various riffs on these basics in the USMNT’s recent friendlies. Jackson Yueill, Kellyn Acosta, and Sebastian Lletget started against Trinidad & Tobago at the end of January camp. Yueill, Lletget, and Brenden Aaronson got the nod vs El Salvador in December. Tyler Adams, Weston McKennie, and Yunus Musah played together in both of November’s matches. That last trio was impressively fluid with their range, understanding of space and responsibility, and constant involvement on both sides of the ball.

Of those, Yueill is the only one in the Olympic camp at the moment. Given his regular minutes of late and his nine career caps for the senior team, the San Jose Earthquakes standout appears to have an inside track on a starting job in deep midfield this month. The technical staff clearly appreciate his tactical intelligence and broad range of passing, allowing the US to be more proactive.

Will he be asked to protect the back four all by himself? The U-23s face two strong opponents in the group stage, Costa Rica and Mexico. They’ll probably have to beat at least one of them to survive and advance to the knockout stages. Starting Yueill as a lone 6 in either of those matches poses a risk. That’s not only in terms of shielding the center backs when defending but also susceptibility to counterattacks.

If a second holding mid is the answer, Johnny Cardoso offers an interesting option, with solid tempo-setting and a rugged edge. New Colombian-American recruit Andres Perea can cover enormous amounts of ground and impose himself physically. Hassani Dotson is a versatile player who’s shown a knack both for disrupting opponents’ buildups and surging into the attack at the right moments.

Or perhaps it makes more sense to Kreis to deploy a destroyer or two further up-field? Supposed the US wants to stay on the front foot whenever possible without sacrificing ball winners. In that case, players like Frankie Amaya, Tanner Tessmann, and Eryk Williamson are more like #8s but willing to do the dirty work against the ball. That may allow the entire team to step higher and confront the opposition earlier in their buildups.

Then there’s the question of creativity. Kreis may decide this team needs something closer to a conventional playmaker at the top of midfield. This is where Cole Bassett, who is something of an “8.5,” capable of chipping in hard labor but also blessed with a knack for timely runs into the opposing penalty box, offers some interesting options. Or there may be enough options in the corps of wingers, front runners, and withdrawn strikers to do without a true #10.

Some observers would cite the Adams-McKennie-Musah trio as the model to start from here. If that’s the case, do the U-23s try to replicate that as closely as possible? Or is the personnel context too different? If the coaching staff follow through with the pressing concepts they’ve been work-shopping in those friendlies, it will be essential for the midfield three to keep the front and back lines in concert. That would prevent quick-thinking adversaries from playing through too easily.

As assertive as the current staff may wish to be, Los Ticos and El Tri are tough teams. Even more so in the compressed format of an eight-team tournament where the margin for error is limited. How much of a philosophical compromise does that entail, if any?

That, in turn, points toward the psychological component of this event. Kreis has repeatedly batted down the idea that the failures to qualify for the past two Olympics are a burden for his group. He does, however, recognize that his team’s success can brighten the general mood around the program overall. It means something if the 12-year qualification drought ends with confidence.

“I’ve presented to the guys that we have a chance to almost, ‘rewrite history’ is not the right word, but I think make a major step forward is the right word,” Kreis told reporters as the U-23s opened their training camp in Guadalajara this week. “We have the first opportunity to make a major step forward and qualify for a major tournament, whereas the full team, they’ve got qualifying at the end of the year. So we kind of get the first bite at this and that’s another motivating factor.”