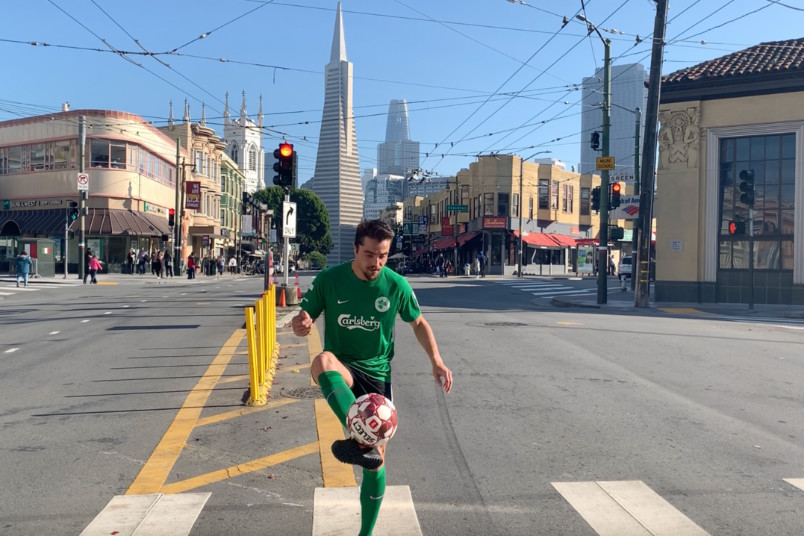 By Charles Boehm – WASHINGTON, DC (Apr 1, 2021) US Soccer Players – From its history and location to its name to the fact of its very existence, Treasure Island is a curiosity. Carved out of shallow water next to Yerba Buena Island in the mouth of San Francisco Bay to host the 1939 Golden Gate International Exposition, it’s a monument to the ambitions of the New Deal. Over the decades, the low-slung artificial island about halfway along the San Francisco–Oakland Bay Bridge has been home to Navy blimps and seaplanes, sailors packing out for the Pacific Theater in World War II, nuclear warfare training and plenty of accompanying radioactive materials, movie sets, and an oil spill, among others.

Now we can add high-level soccer to that list. Last week San Francisco Glens SC, a youth club that also operates a USL League Two side and other adult teams, announced that the city approved their plans to build a small synthetic-turf complex on Treasure Island. It will host matches and training sessions for its teams and the wider community starting next spring. It’s a concept more than a decade in the making and maybe, just maybe, an unprecedented foothold for the pro game in a world-class city.

“For San Francisco being such a major metropolitan city and a soccer hotbed,” Glens director of communications and community partnerships Ryan Maquinana told USSoccerPlayers.com, “it’s never had the club to actually go out and build its own facility and build a home for its players and fans and club community. So I think we’re really entering these uncharted waters for San Francisco soccer.”

Founded as an amateur team in 1961 by members of the city’s Irish community, the Glens’ history and extensive youth setup helped the club cultivate the relationships with local government and real-estate entities that eventually got them to this breakthrough. Their new home will be a relatively humble facility, with just one full-sized FIFA regulation pitch and modular seating for 1,500 spectators as well as offices, locker rooms, a press box, and the like.

With vistas of the Bay, Alcatraz and Angel islands, the downtown Frisco skyline, and the architectural wonder that is the Bay Bridge, the setting promises to rank among the most unique and romantic in North America. In order to sidestep rush-hour bridge traffic, most players and fans are likely to arrive via ferries slated to shuttle back and forth from the Embarcadero every half-hour. A brewery, winery, and other offerings will be nearby on the island as it undergoes a massive $5 billion development push. It’s got all the makings of another intriguing lower-division boutique project.

“Our tailgate experience, I think, will be a lot different than others, because I assume a lot of that’s going to happen on these ferries,” said retired USMNTer Jimmy Conrad, head coach and technical director of the Glens’ League Two team, with a laugh. “It’s hard to get into a very dense metropolitan area and find some space. But if you could, imagine the possibilities.”

A hip gameday atmosphere may be key for a sustainable entertainment product to fuel the Glens’ growth, and ambitions of someday fielding a fully professional team. Building out a pathway for the club’s top youth players and other aspiring talents in the region is just as important. Every zip code in the city is represented among the 1,000-plus participants in the Glens’ many teams and programs. That ranges from recreational to futsal to academy sides that compete in the new MLS Next development league.

That plus a robust scholarship initiative helps make them, by their reckoning, the most diverse youth club in the area. A growing list of Glens players have gone on to reach the pro level, most recently 2021 first-round MLS SuperDraft pick Nabi Kibunguchy, and the club believes there’s plenty more upside to be explored.

“What we’ve seen in the past has been, the best players in San Francisco have been leaving the city for opportunities at the club level,” explained Glens president and director of football Mike McNeill. “And I think the success of our club in the past few years has been because we’re able to keep those players in our city, with the program that we’re building. Now with this additional facility, we’re hoping that not only are we keeping players in the city, but we’re attracting some of the best talent as well.”

Noted Conrad, “We really do take a great deal of pride in being a club that’s inside the city, and trying to create paths of success for our kids. No matter what their background is, they have a chance and they have an advocate in the Glens that are going to try to help them get to where they want to go.”

Its culture, global reputation and stratospheric real-estate market has made San Francisco part fantasy, part mirage for pro soccer. MLS didn’t even try to penetrate its dense urban core when the league launched in 1996. Instead, they opted for a more suburban footprint some 50 miles to the south in San Jose. Even at that, it took the Clash/Earthquakes two decades to gain a stadium of their own. Conrad himself was part of the rough early days when trailers served as locker rooms and players had to make long daily drives just to find a training field

San Francisco has a multi-national population and deep soccer roots. Its SFSFL (San Francisco Soccer Football League) dates back to 1902 and considers itself the nation’s oldest league in continuous existence. Yet its history is littered with failed pro startups like the Seals, Blackhawks, Fog, Gold Pride, and Victory. Most recently, the “won and done” Deltas of the modern NASL. They hoisted that league’s final championship trophy but burned millions on a half-baked business plan along the way.

The Glens are working the other way around.

“What I really appreciate about the Glens, and one of the attractions for me to want to be involved with the club and the people there, was that they weren’t trying to skip steps,” said Conrad, who juggles his coaching career with a full slate of media work for CBS Sports and other outlets. “They weren’t trying to punch above their weight. They know who they are.”

In a comparable way, so does community-minded USL Championship club Oakland Roots to the east. Meanwhile, fellow League Two side and crosstown rival San Francisco City represents a supporter-owned model. Farther afield, Sacramento Republic FC has carved out a place in the state capital, all signs of the region’s soccer potential.

“I get this question a lot: What makes you different than the Deltas? What makes you different than the California Victory?” said McNeill. “We’re building from the ground up. We’re not putting a brand at the top and trying to sell that. We have an active audience right now of over 1,000 players every year in our club, and then we have an alumni [list] that goes back to 1961… when you talk about capturing the imagination of fans and trying to build a fan base and something that’s long-lasting, I think that we have set the groundwork for that.”

Over the years, clubs across North America have sought to find that sweet spot between localized, tribal allegiance and broader appeal. MLS and the Quakes have plenty of work to do just to fill the stands down in San Jose. Sacramento’s top-flight expansion hopes are currently on life support. That might leave space for a different and perhaps more organic growth process to unfold in the heart of the Bay Area.