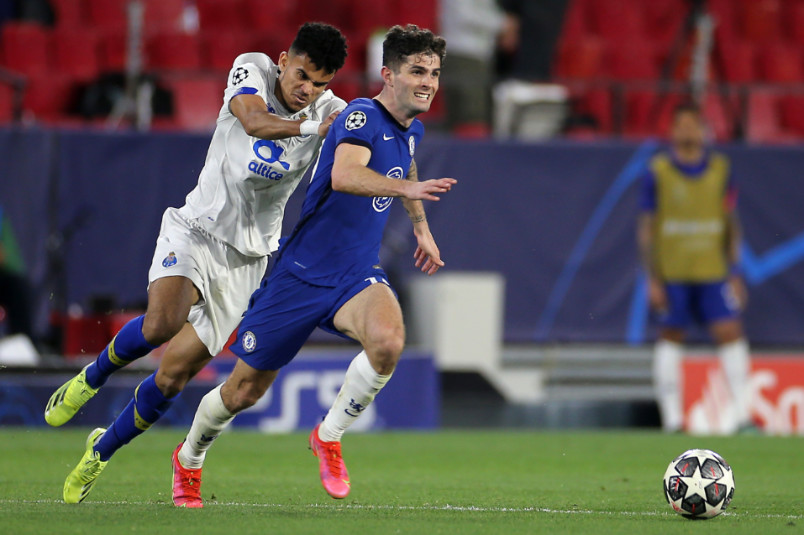 Wednesday’s soccer news starts in the Champions League. Christian Pulisic’s Chelsea finished off their quarterfinal series with Porto, advancing 2-1 on aggregate after losing the second-leg 1-0 at home. The game’s only goal came three minutes into stoppage time.

“We accepted what was needed tonight, and I think we deserved to go through,” Chelsea manager Thomas Tuchel said. “It was a tough game, perhaps not the best to watch on the television, but from the sidelines I could see a very fast and intense match. It was a tough fight and we had to work hard at times to escape the pressure.”

In the Championship, Cameron Carter-Vickers’s Bournemouth won 2-1 at Duane Holmes’s Huddersfield Town. Phillip Biling scored for Bournemouth in the 15th with Dominic Solanke doubling the lead in the 45th. Jonathan Hogg pulled a goal back for Huddersfield Town in the 76th. Holmes subbed out in the 85th minute.

Matthew Olosunde subbed out at halftime of Rotherham United’s 3-1 home win over QPR. Trailing from a 52nd minute Lyndon Dykes goal, Freddie Ladapo scored for Rotherham in the 64th and 66th minutes. Michael Smith made it 3-1 in the 90th. Geoff Cameron wasn’t in the squad for QPR. Lyndeon Gooch subbed on in the 64th minute of Sunderland’s 2-1 loss at Wigan Athletic in Ligue 1. Charlie Wyke scored for Sunderland in the 32nd. Wigan equalized in the 42nd, going ahead for good in the 58th minute.

In the Concacaf Champions League, Atlanta United advanced to the quarterfinals with a 1-0 won over Alajuelense to take the series 2-0 on aggregate. Against an under-strengthed Alajuelense due to quarantine issues, Jurgen Damm scored the game’s only goal a minute into stoppage time.

“The first-half the team controlled the game well and the team was well-positioned against a team that was waiting in their defensive zone,” Atlanta coach Gabriel Heinze said. “I think we could have been much more patient. And these things with the fans are welcome because soccer is for the fans.”

Portland shutout Marathon 5-0 a home with that series finishing 7-2 on aggregate. Yimmi Chara scored in the 19th and 36th with Diego Valeri making it 3-0 on the night in the 66th. Chara finished his hat-trick in the 78th with Marvin Loria scoring in the 89th minute.

The US Women finished off the international window with a 2-0 shutout at France in Le Havre. Megan Rapinoe converted a 5th minute penalty and Alex Morgan scored in the 19th. US Women’s goalkeeper Alyssa Naeher made one save to keep the clean sheet with the undefeated streak for the USA now at 39 games.

The Washington Post’s Steven Goff with the USWNT turning things around against France. SI’s Avi Creditor on the win and April camp.

Also in the soccer news, Concacaf announced that Las Vegas’s Allegiant Stadium will host the 2021 Gold Cup final on August 1. The tournament begins on July 2 at Inter Miami’s stadium in Fort Lauderdale with the preliminary round.