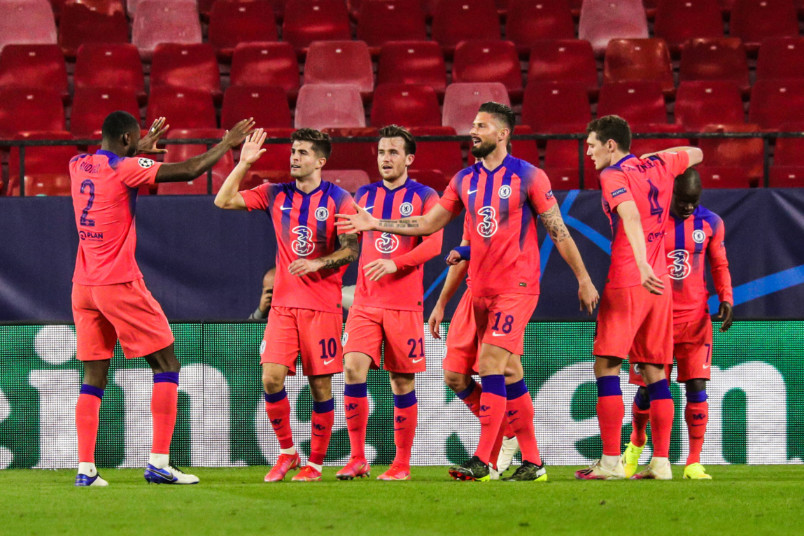 Thursday’s soccer news starts in the Champions League. Christian Pulisic subbed on in the 65th minute of Chelsea’s 2-0 win at Porto in Sevilla. Mason Mount scored in the 32nd minute and Ben Chiwell added another away goal in the 85th. Chelsea goalkeeper Edouard Mendy made five saves to keep the clean sheet.

“The result is excellent for us,” Chelsea coach Thomas Tuchel said. “It was a tough match against a very strong Porto side. They are hard to play against, they are a proud club and an emotional team that fight hard. There were moments where we suffered, but this is to be expected because the circumstances are very different. This is a Champions League quarterfinal, and you have to suffer at times. But there were also some moments in the game where we were excellent.”

In Serie A, Weston McKennie subbed on in the 69th minute of Juventus’s 2-1 home win over Napoli. Cristiano Ronaldo scored in the 13th minute with Paulo Dybala doubling the lead in the 73rd. Napoli converted a 90th minute penalty. The result has Juventus in 3rd-place in the table with 59 points from 29 games, a point behind 2nd-place Milan. Inter Milan leads Serie A with 71 points.

“We’ve dropped lots of points along the way because we’ve lacked a cutting edge at times, especially in matches which look easier on paper,” Juventus coach Andrea Pirlo said. “You can’t afford to do that in a league where all the teams are so well prepared. When we play with the spirit we showed today, this desire to win and to put in a shift for the team, that’s when you get results.”

Tyler Boyd scored twice in Sivasspor’s 4-2 win at Antalyaspor in the Super Lig. Boyd put Sivasspor up in the opening minute with Antalyaspor equalizing from the penalty spot in the 27th. It was Boyd again with a 36th minute goal. Mustapha Yatabare made it 3-1 Sivasspor in the 47th. Antalyaspor cut the lead to one in the 67th with Erdogan Yesilyurt scoring for Sivasspor three minutes into stoppage time. Josh Sargent subbed out in the 73rd minute of Werder Bremen’s 1-0 win at Jahn Regensburg in the DFB Pokal quarterfinals. Yuya Osako scored in the 52nd minute.

Moving to the Concacaf Champions League, Toronto drew 1-1 at Leon to open their round of 16 series. Falling behind in the 25th minute, Toronto equalized through an own-goal in the 50th. Philadelphia won 1-0 at Saprissa. Kacper Przybylko scored in the 34th minute.

“I love the way we stuck together,” Toronto coach Chris Armas said. “I love the way we stepped on the field straightaway. We were going to try to stick to being who we are, be aggressive on the night, and it gets us the goal in a pressing situation. I love the way the guys dug deep in the second-half. And really, that’s what I think is admirable from the team. Overall, a gutsy performance. No matter what, they stuck together all night.”

BBC Sport on the top of the Serie A table. The Independent’s Miguel Delaney with PSG’s win over Bayern Munich as the ideal for European soccer. The Guardian’s Jonathan Wilson asks about the defending from both clubs. FourFourTwo’s Chris Flanagan interviews former Montreal Impact coach Thierry Henry.