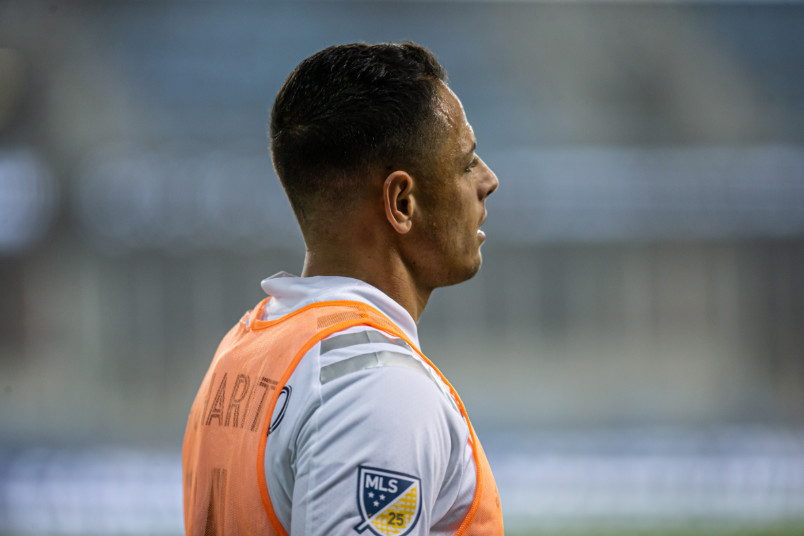 By Luis Bueno – RIVERSIDE, CA (Apr 21, 2021) US Soccer Players – When he got word that he was leaving La Liga for the LA Galaxy, Javier “Chicharito” Hernandez cried. In a video released on social media weeks after the move was made official, Hernandez shed some tears after closing the door on his European career. The move to MLS was long in coming, a marquee member of Mexico’s national team the latest to choose the league. What didn’t work out in 2020 is already showing promise this season.

Interviewed on the field on Saturday, Chicharito said, “I’m holding my tears” while setting a trophy as the target for his club.

It’s tough to be overly critical about anything that happened last season. The situation was too unexpected and extreme to treat it as indicative of any long-term trends. What was supposed to trigger a turnaround with the Galaxy ended up in a 10th-place finish in the Western Conference. Chicharito scored two goals over a dozen games, with the club moving on from coach Guillermo Barros Schelotto on October 29. Everybody involved with the Galaxy knew it would take another rebuild.

Just one game into the 2021 campaign, and Hernandez is trying to change the script. In the Galaxy’s season opener at Inter Miami FC, Hernandez looked like the goalscorer he has been throughout his career. Down a goal in the second-half, Hernandez scored twice to lead the Galaxy to a 3-2 win.

What we’ve already seen in one game this season is what fans expected last year. Chicharito as the kind of player the team needed to fill the void of goalscorer extraordinaire Zlatan Ibrahimovic. At the same time, we’re also already seeing the downside. One player alone isn’t going to be able to get the Galaxy from there to the upper reaches of the Western Conference.

More to the point, relying on a marquee talent is something the Galaxy already knows has its limits. A free scoring version of the club with Zlatan providing the offense missed the playoffs in 2018 with a 7th-place finish. A season later, they were 5th, exiting the playoffs in the semifinals to the other LA team.

Where the Galaxy is right now is once again complicated. Hernandez as the key to unlocking a stifled offense makes sense. Though no one expects a Zlatan-like run of goals, Chicharito is certainly capable of changing games. If this is the end to last season’s scoring drought, he key. Yet we already know that scoring will only get this club so far.

The two seasons of the Ibrahimovic era produced some highlight reel goals. Hernandez looks poised to add to that, but it’s not a direct link to trophies and silverware. Against a team undergoing its own rebuild, Chicharito’s magic brought the Galaxy back in a game they didn’t have under control. It also won him player of the week honors, in part a testament to the job he did in the season opener.

No doubt that gives the club reasons to be hopeful under new coach Greg Vanney. Maybe some of those points lost last season during a lengthy losing streak will move into the Galaxy’s column. It doesn’t take much in MLS to trigger a revival. With that in mind, Vanney could wind up being the club’s most important signing since Robbie Keane. Vanney knows that it will take more than getting the ball to his star player to revive the Galaxy.

Consider, though, the pre-Ibrahimovic days. The Galaxy scored 66 goals in 2018, Ibrahimovic’s first season with the club. That was second in the Western Conference and third overall in MLS. In 2019, the Galaxy scored 58 goals, second only to LAFC and its ridiculous 85-goal tally. That glut of scoring didn’t transform the club for the most obvious of reasons.

It’s this team’s defense at issue since 2017. As much as any team in the league, the Galaxy demonstrates the problem with assuming a strong offense is enough of an answer. In 2018, the club was fourth-worst in goals allowed. In 2019, the Galaxy was one of two playoff teams with a negative goal-differential.

Last season, the bottom fell completely out. The Galaxy allowed 46 goals in 22 games, a horrid stretch that kept the team near the bottom of the Western Conference table. That total is more than LAFC (37) and Sporting KC (40) allowed in 2019 and 2018, respectively, as each team finished in first place in the Western Conference those seasons. That was in full 34-game campaigns.

Vanney’s defensive choices will be the story this season. Goalkeeper Jonathan Bond joined the team to give Vanney a fresh start at goalkeeper. Jorge Villafana, Oniel Fisher, and Derrick Williams will help provide a defensive boost. LA still looked out of sorts defensively in week one, even with a new-look backline. Inter Miami scored twice and had several other looks at goal.

As strong as Hernandez looked, he can’t score a brace every game and help bail out the Galaxy’s defense. At some point, this defense will have to stop an opponent cold and grind out a 1-0 win. That may well come Sunday against New York or perhaps the following week against Seattle. Both of those are opportunities for this defense to show that things are changing for the better.

In its heyday, the Galaxy was tough-as-nails defensively. That toughness came from a strong mentality started from the coaching staff. It certainly helped to have players like Omar González and Todd Dunivant around, but then-coach Bruce Arena set the tone.

Vanney is trying to establish his own mentality in LA after his run with Toronto. A coach that was able to take Toronto FC from perennial floormat to MLS Cup champion gets the benefit of the doubt. He knows the territory and what works in this league. With the right support and a bit of luck, there’s no reason to think of LA as a perpetual problem club.

What we know right now is that Vanney already has his club playing exciting, back-and-forth, high-scoring soccer. The real test comes when it’s the defense making the plays that keep them from losing. Given what we’ve seen over the last few seasons, that’s the only way to judge the LA Galaxy.