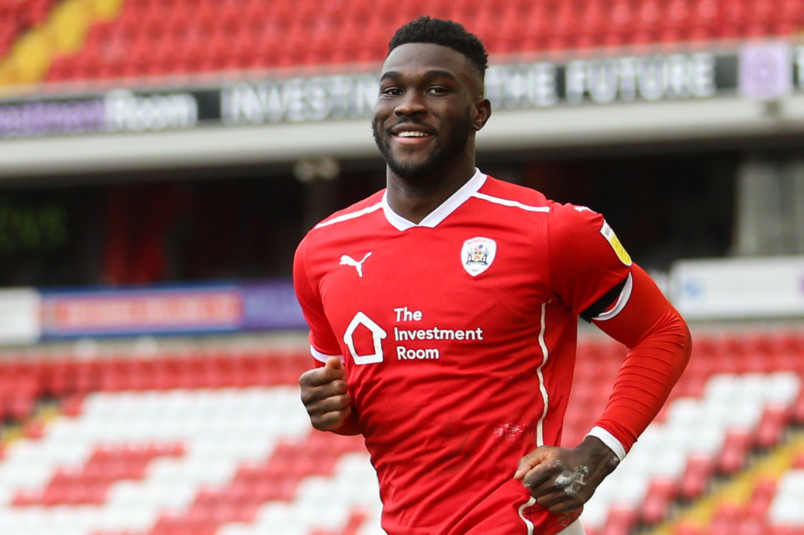 By Jason Davis – WASHINGTON, DC (Apr 23, 2021) US Soccer Players – It’s getting silly now. What started as a 20-year-old American striker with just a partial year of professional experience getting an opportunity is now something else. Daryl Dike’s move to Barnsley just a few months ago is now a phenomenon. It could change the fortunes of the player and the club he joined on what seemed like a low-profile loan.

First, the raw numbers. Oklahoma-born Orlando City forward Daryl Dike now has nine goals in 16 appearances for Barnsley Football Club, a return that gives the former University of Virginia player 0.75 goals per 90 minutes in England. With his latest goal, an overhead kick that found the net against Huddersfield Town, Dike pushed his total in the Championship beyond the eight goals he scored for Orlando City last season.

Dike’s latest was an eye-popper. As if to prove a point about the varied ways in which he can score, Dike acrobatically threw himself over and slammed home the lone goal for Barnsley in what was a crucial win. Dike does go games without scoring, but his goals are frequent enough that it’s difficult to remember them. His output is helping to push Barnsley into the playoff picture.

That’s 17 goals in 26 professional games. With that sort of goalscoring, output comes attention from many quarters. For fans of the USMNT, Dike’s rise as a goalscorer makes him an intriguing possibility for important games later this year. Orlando City fans can dream of Dike returning to Central Florida and contributing to the Lions’ push for an MLS Cup championship this season.

Obviously, that depends on Dike returning to MLS. Dike’s incredible run in England has drawn interest from richer clubs in the country. Even before his recent run of goals, the Orlando Sentinel reported that Orlando City turned down a $10 million transfer offer for him.

Logic says that the more goals that Dike scores, the higher the price will go. At the moment, Orlando’s choice to pass on the first offer looks like a wise one. Dike’s transfer value is clearly on the rise.

Three weeks ago, Orlando City sources restated the club’s intention to hold out for $20 million for Dike. At the time, that number seemed designed to price out any interest and ensure that Dike will be back in Florida. Now, getting what would be a record fee for an American player seems very possible. Even concerns that Dike’s numbers aren’t a true reflection of his talent via the modern Expected Goals metric are unlikely to quiet excitement around his talent. It’s all enough to imagine Barnsley might even trigger the purchase clause in the loan agreement with Orlando, should the Tykes leap the Premier League.

A bit of context. Barnsley’s record transfer fee is £1.5 million paid for striker Gjorgji Hristov in 1999. To say that Dike would represent a new level of commitment for the club would be a massive understatement. Dike is a unique combination of skill, athleticism, and youth.

Orlando’s calculation was never going to be easy, but the opening weekend of the 2021 MLS season made it a bit more complicated. With Dike away on loan and the Lions parting ways with Dom Dwyer in the offseason, Orlando signed forward Alexandre Pato to fill the gap up top.

Pato arrived in MLS following a stint in his native Brazil. At 31, Pato’s history is one of brief flashes of immense talent followed by injury and inconsistency. Orlando’s decision to bring him to America was a gamble that the talent would win out over the issue that plagued him throughout his 20s. Now 31, Pato is a player with a big name who trods ground walked by Orlando’s first famous signing, Kaka, and the current marquee talent on the roster, Nani.

Pato lasted 78 minutes into his first MLS match. After jumping over a challenge by Atlanta United’s Franco Ibarra, the Brazilian landed awkwardly and fell to the ground. Head coach Oscar Pareja subbed out his new signing, leaving Lion Nation to wonder about Pato’s status through the opening portion of the season.

The good news is that Pato doesn’t require surgery. The bad news for Orlando is that he’ll likely miss several weeks recovering from what the team disclosed as a “lower-body injury.”

“We’re waiting and may God just help us on Pato and [that] he’s not hurt,” Pareja said. “We’ll wait until the doctors diagnose him. We have other players, too. We don’t want to lose any and probably one of the things that hurts the most from the coach’s standpoint is just to see any player get hurt. So let’s wait, but now we have to keep going. It’s just the start of the season.”

Even if the Brazilian striker returns to the fold in short order, his history should give Pareja and Orlando fans pause. Without Pato, the club is extremely thin at the center forward position. Dike won’t be back in Orlando until mid-May at the earliest and may need a period of quarantine and rest before he’s ready to suit up in MLS games.

Of course, there’s also the question of a potential transfer for Dike looming. If Pato joined to help cover for Dike until May and if/when the club accepted a transfer offer, an injury in the first game of the season calls the plan into question.

It beggars belief that the Lions would turn down a record offer for Dike. No matter the club’s resolve or belief that Dike is crucial to a successful season in 2021, every player has a price. At some point, the market for the striker will max out, and Orlando will be in danger of missing an opportunity.

This is the new MLS. In a league that restricts spending through salary budget rules and roster restrictions, clubs will face difficult choices. Sell a player and reap the financial windfall may hurt the chances of a championship. Holding on to a player may mean missing out on the payday. Thanks to just how silly it’s getting for Daryl Dike, Orlando’s choice gets tougher by the week.