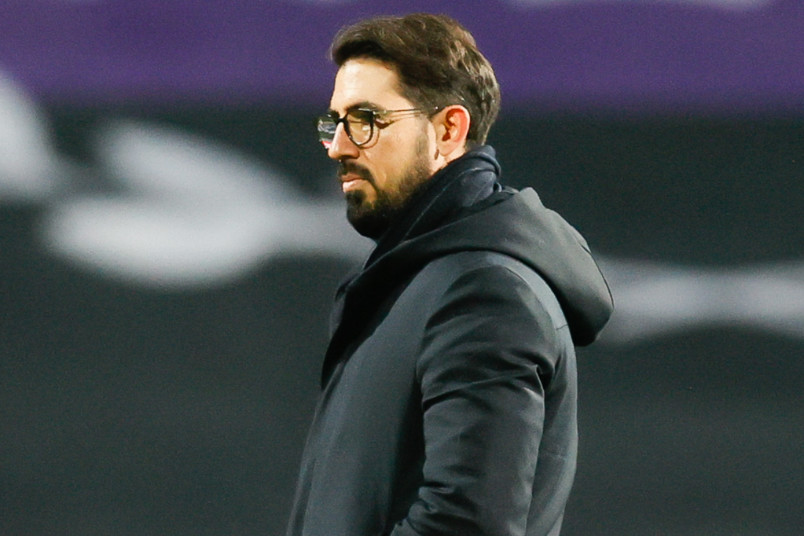 By Charles Boehm – WASHINGTON, DC (Apr 8, 2021) US Soccer Players – Asked for an update on the course of preseason, Hernan Losada did not waste time nor mince words. “There’s still a lot of work to do,” said DC United’s new head coach on Tuesday, speaking to media for the first time in several weeks. “I have to say that I didn’t expect this progression after five weeks of preseason, not only on the field with our style of play, but also condition – condition has to be much better. We still have a long way to go. I don’t believe that from the physical point of view we will be ready for the 17th of April,” the date that marks United’s 2021 season opener, a visit from New York City FC.

If any of the reporters on the call thought Losada was unintentionally using such blunt phrasing in his second language, he addressed that in his follow-up.

“Fitness, that’s what is missing. Fitness to be ready to play the way we want for 90 minutes,” he said. “I think at this point we can only play the way we want for 60, 65, 70 minutes, not more than that. And it will take some time to get that intensity and energy we are using during the games and during the sessions, to be able to play that way for 90, 95 minutes … I didn’t expect to have the team so unfit.”

That might sound a bit harsh, given that his squad is coming off the longest offseason in MLS history. That’s a product of the league’s decision to push back the season’s start some six weeks later than the norm to play fewer games in empty stadiums as the COVID-19 pandemic ebbs. Yet it’s also a useful data point about the changes at United, a proud club wracked by underachievement of late.

The episode underlines Losada’s commitment to a high-tempo, high-pressing style and the demands he is imposing on his players to implement it. A few days earlier, DC winger Julian Gressel provided a window into that process on the podcast he co-hosts with his fellow MLS-based German Fabian Herbers of Chicago Fire FC.

“Basically what our coach said was that everybody needed to lose a little bit of body fat at least, some guys more than others,” revealed Gressel on Zee Soccer Podcast. “Two, three times a week we have to weigh in in the mornings. Certain guys get certain goals set. If you’re over a certain weight or come in over a certain weight then you get a fine or you have to spin the wheel [shorthand for a lighthearted locker-room disciplinary system], so it’s been pretty strict here.”

Many teams track body fat. Losada and his staff take it to the next level, eschewing the traditional calipers method in favor of DEXA (short for dual-energy X-ray absorptiometry) scans. This expensive piece of technology reads the body’s soft tissue and bone composition to compile detailed data profiles.

Gressel said he clocked in at 8% body fat when measured via calipers at the end of the 2020 campaign. At the start of preseason, however, the new bosses informed him that the DEXA process placed him at 14%, and that he would have to adjust his diet and shed weight. He estimated that he’s since lost seven to 10 pounds from where he was in the fall.

“I’ve just kind of been a bit more mindful about everything, because it actually feels great. Getting those five, 10 pounds off is something that actually I think will help me,” he said.

Even during last year’s COVID lockdowns Bielsa, a key philosophical influence of Losada’s, required his players to report their weight to the coaching staff first thing every morning before they embarked on their extensive workout regimen. Those who do not meet targets and expectations end up benched until they make the grade. As ruthless or intrusive as it may seem, it’s now a necessary part of the relentless running required for Leeds to press and possess with the intensity that’s elevated them from the second division to midtable Premier League status.

Losada has said that Bielsa is only one of many role models that have shaped his approach to his craft. Still, the extent of his specificity about this aspect of his process hints at shared values that could make DC one of MLS’s more interesting subplots this year, however their results may unfold.

“The last two [preseason] games, you can see now we have identity, and we know exactly where we are going. So it’s a good thing for everybody. It’s a good thing for the club, for the players,” said veteran defender Fred Brillant on Tuesday. “We want to press the opponent … the pressing is very intense, very high.”

Losada, 38, is the youngest head coach in the league by two years and arrives from Belgian club Beerschot with no prior experience of MLS. An engaging personality who was seen by some as one of Western Europe’s bright young coaching talents, his hiring still carries risks for DC.

Can United embrace and execute the high-risk, high-reward dynamics of the press and counterpress? Will Losada hold the trust and commitment his methods demand of his players? Will the eventual on-field product lure the Washington soccer community back to Audi Field in the absence of star names like Wayne Rooney?

Losada has sought to moderate expectations for the early stages of his tenure. That said, he sounded uncompromising about why his training sessions are so grueling.

“I have to say that the mindset of the players is great. They come to the club with loads of positivity, willing to work hard, willing to get better,” he said. “But it’s taking us a lot of energy to become a fit team. If we want to compete with teams that are going to be better than us, teams that have more budget and better players than us, we need to be the fittest team in the league.”

That’s a high bar in a league that’s home to the hard-running New York Red Bulls, Philadelphia Union, and San Jose Earthquakes. It shouldn’t take long to know whether we can place DC in that company in 2021.