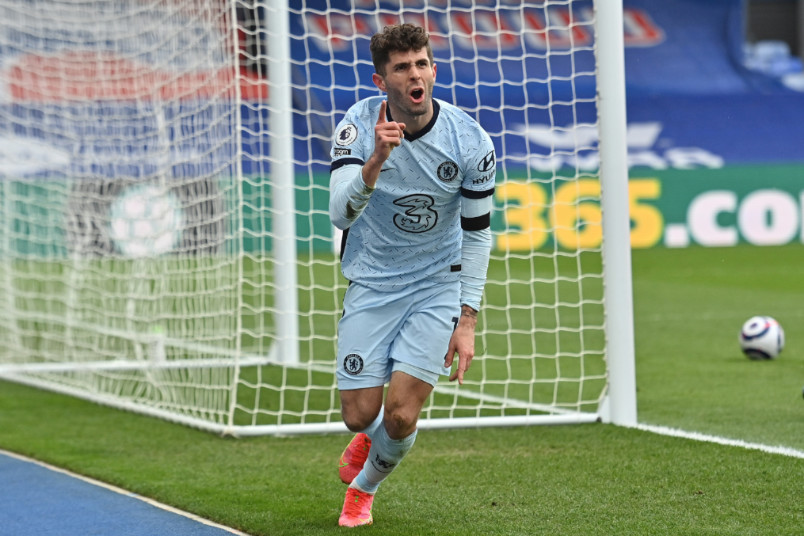 The roundup of USMNT players abroad starts in the Premier League. Christian Pulisic scored twice in Chelsea’s 4-1 win at Crystal Palace. Kai Havertz put Chelsea up in the 8th minute. Pulisic doubled the lead in the 10th with Kurt Zouma scoring in the 30th. Crystal Palace pulled a goal back in the 63rd with Pulisic scoring again in the 78th minute.

“I’m feeling really confident, I’m feeling very good with the team as well,” Pulisic said. “It was a big response from the last Premier League game as well. We’re not going to win every game and we had a tough game against West Brom for sure. We didn’t play to our usual standard, but that’s going to happen and we were able to respond well. The way we responded this week and got the results, we’re definitely happy.”

Weston McKennie subbed on in the 68th minute and scored in Juventus’s 3-1 home win over Genoa. Dejan Kulusevski put Juventus up in the 4th minute with Alvaro Morata scoring in the 22nd. Genoa scored in the 49th with McKennie adding Juventus’s third goal in the 70th minute.

“Unfortunately, we’ve made things difficult for ourselves in several games that seemed straightforward on paper, and that’s cost us points along the way,” Juventus coach Andrea Pirlo said. “That didn’t happen today because we had a great first half and we looked to be dominating the game, but some carelessness led us to struggle a bit more than we should have.”

Bryan Reynolds subbed out in the 76th minute of Roma’s 1-0 home win over Bologna in Serie A. Borja Mayoral scored in the 44th minute. In La Liga, Sergino Dest subbed out at halftime of Barcelona’s 2-1 loss at Real Madrid. Trailing from goals in the 13th and 28th minutes, Oscar Mingueza scored in the 60th. Barcelona played a man up from the 90th minute.

Yunus Musah subbed on in the 63rd minute of Valencia’s 2-2 home draw with Real Sociedad. Down from goals in the 33rd and 45th, Daniel Wass converted a 60th minute penalty and Gabriel Paulista scored in the 73rd. Valencia went down a man in the 80th. Musah saw yellow in the 68th minute. Shaq Moore’s Tenerife shutout Sporting Gijon 1-0 at home. Fran Sol scored in the 66th minute.

Timothy Weah subbed on in the 75th minute of Lille’s 2-0 win at Metz in Ligue 1. Burak Yilmaz scored in the 60th minute with Mehmet Zeki Celik adding a goal in the 89th. Nicholas Gioacchini’s Caen lost 3-1 at Grenoble in Ligue 2. Trailing from goals in the 49th and 74th minutes, Andreas Hountondji scored for Caen in the 70th. Grenoble added a third goal in the 81st minute.

Josh Sargent subbed out in the 83rd minute of Werder Bremen’s 4-1 home loss to Tyler Adams’s RB Leipzig in the Bundesliga. Adams subbed out at halftime. Dani Olmo put Leipzig up in the 23rd minute with Alexander Sorloth adding goals in the 32nd and 41st minutes. Werder Bremen’s Milot Rashica converted a penalty in the 61st. Marcel Sabitzer scored Leipzig’s fourth goal in the 63rd.

Timmy Chandler’s Eintract beat John Brooks’s Wolfsburg 4-3 at home. Chandler subbed on in the 89th minute. Ridle Baku scored for Wolfsburg in the 6th minute with Daichi Kamada equalizing in the 8th. Luka Jovic gave Eintracht the lead in the 27th. Wout Weghorst equalized for Wolfsburg in the 46th minute. Eintracht’s Andre Silva scored in the 54th with Erik Durm making it 4-2 in the 61st. An own-goal pulled Wolfsburg within a goal in the 85th.

Gio Reyna subbed out in the 79th minute of Borussia Dortmund’s 3-2 win at Stuttgart. Down a goal from the 17th, Jude Bellingham equalized in the 47th. Marco Reus put Dortmund up in the 52nd with Stuttgart equalizing in the 78th. Ansgar Knauff scored Dortmund’s winner in the 80th minute. In the 3.Liga, Terrence Boyd scored in Hallescher’s 2-1 home win over Uerdingen. Trailing from the 61st, Stipe Vucur equalized in the 90th with Boyd’s goal winning the game two minutes into stoppage time.

Erik Palmer-Brown’s Austria Vienna lost 1-0 at Hartberg in the Austrian Bundesliga. Brandon Servania subbed on in the 76th minute for St Polten’s 1-0 loss at Altach. Brenden Aaronson subbed out in the 85th minute of Red Bull Salzburg’s 3-0 win at Rapid Vienna. Andre Silva scored in the 36th with Karim Adeyemi adding two stoppage time goals. Andrew Wooten’s Admira Wacker lost 2-0 at home to Ried to goals in the 53rd and 60th minutes.

Kenny Saief subbed on in the 63rd minute of Lechia Gdansk’s 1-1 draw at Slask in Poland’s Ekstraklasa. Trailing from the 8th minute, Tomasz Makowski equalized in the 34th. Saief saw yellow in stoppage time. Luca De la Torre subbed out in the 79th minute of Heracles’s 4-0 home win over Willem II in the Eredivisie. Sinan Bakis scored in the 6th and 38th with Robin Propper making it 3-0 in the 46th. Rai Vloet finished off the goals in the 77th minute.

Reggie Cannon subbed out in the 67th minute of Boavista’s 3-3 home draw with Rio Ave. Yusupha Njie scored for Boavista in the 3rd minute with Rio Ave equalizing in the 10th. Njie scored again in the 13th. Boavista went down a man with a red card to Yanis Hamache in the 57th. Rio Ave scored in the 70th and equalized three minutes into stoppage time. They saw red a minute later. Romain Gall’s Orebro drew 0-0 at home with Goteborg in the Allsvenskan.

Jordan Siebatcheu subbed out in the 81st minute of Young Boys’ 2-0 home shutout of St Gallen in the Swiss Super League. Christopher Martins scored in the 62nd with Jean-Pierre Nsame doubling the lead in the 83rd. Siebatcheu saw yellow in the 21st minute.

Matt Miazga’s Anderlecht beat Club Brugge 2-1 at home in Belgium’s Pro League. Trailing from a 53rd minute Noa Lang goal, Lukas Nmecha equalized for Anderlecht in the 72nd. Albert Lokonga scored for Anderlecht in the 76th minute. Miazga saw yellow in the 90th minute. Mark McKenzie subbed on at halftime of KRC Genk’s 4-0 home win over STVV. Theo Bongonda scored in the 21st with Brian Heynan doubling the lead in the 24th. Kristian Thorstvedt made it 3-0 in the 35th with Paul Onuachu finishing off the goals in the 53rd.

Tyler Boyd subbed out in the 67th minute of Sivasspor’s 3-1 home win over Konyaspor in Turkey’s Super Lig. Mustapha Yatabare opened the scoring in the 27th minute with Konyaspor equalizing in the 54th. Olarenwaju Kayode scored for Sivasspor in the 68th, going a man down in the 80th. Robin Yalcin converted a Sivasspor penalty in the 88th. DeAndre Yedlin subbed out with injury in the 28th minute of Galatasaray’s 1-1 home draw with Fatih Karagumruk. Alassane Ndao put Fatih Karagumruk up in the 60th with Ryan Babel equalizing for Galatasaray in the 62nd. Galatasaray went a man down in the 79th.