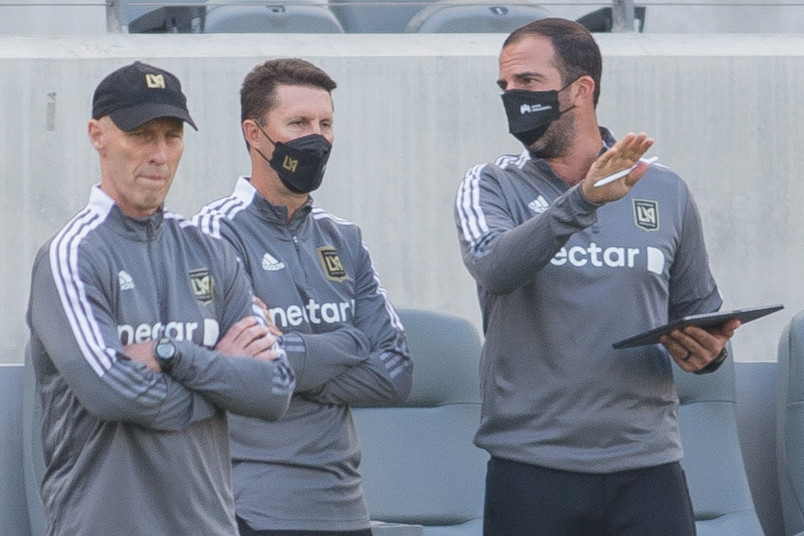 By Luis Bueno – RIVERSIDE, CA (Apr 28, 2021) US Soccer Players – In its short history, Los Angeles FC has been an offensive juggernaut. As an expansion team, LAFC finished second in goals scored and has only upped its game since. They’ve led the league in goals scored in both 2019 and 2020. None of those seasons finished with an MLS Cup, but LAFC has set itself up as a perennial title contender on the strength of its offense.

This season might be different. The wave of goals that quickly became LAFC’s hallmark looks like it could be subsiding. That doesn’t necessarily mean the club’s perch atop the Western Conference is necessarily over.

LAFC looks poised to have another successful season, but it also looks like it could have a different, more defensive feel this time around. If early-season form and trends mean anything, LAFC will not quite be the same attacking monster plaguing defenses all over the league. The season will turn out just fine despite that.

Through two games, LAFC has four points on the strength of a win and a draw. They’ve scored three goals and allowed one in those two games, grinding out both results. These games were about weathering the storm, both from the opposition and LAFC’s roster issues.

LAFC has had Carlos Vela on the field for just 22 minutes and Diego Rossi for zero. Yet, the team did not look like a team lacking conviction on both sides of the field. Instead, it looked like a team that can succeed regardless of personnel.

At a glance, the lineups could look a bit dodgy. In years past, no Vela and no Rossi meant the likes of Adame Diomande, Brian Rodriguez, Christian Ramirez, or Bradley Wright-Phillips would slide into the lineup and simply pick up where the star duo left off. That’s different this season. Those players are all gone, and perhaps with it, the team’s scoring mystique.

With Vela and Rossi leading the charge, those players helped LAFC lead the league in goals the last two seasons. The 2019 season was amazing as LAFC tied the all-time league record for goals scored in a season with 85. Even last year, LAFC scored the most goals in the league with 47. That was with Vela playing just seven games due to injury.

Plan B last year was Wright-Phillips, who had scored 108 goals with New York Red Bulls before joining LAFC. Plan B this year is Corey Baird, who came over from Real Salt Lake in the offseason and had 15 goals in his first three seasons. Also in the mix is Danny Musovski, the ex-Reno FC player who scored five goals in his debut season with the club last year.

That sort of output is a drop off from Diomande, who had 12 and 8 goals in 2018 and 2019, respectively. Rodriguez is also gone, taking with him pace and dynamic energy he brought to the forward line.

Now, this team did not lose Vela and Rossi long-term. The two were mostly absent in the first two games but will play a key role on the team before the year is out. Even with them, the team’s identity is shifting a bit from its high-scorer status.

Opting to put the focus on defense is an interesting choice, especially with goalkeeping. The team did show support for number one goalkeeper Pablo Sisniega by parting ways with Kenneth Vermeer on the eve of the season. Sisniega and Vermeer split goalkeeping duties a year ago, although the team entrusted Vermeer with all of its Concacaf Champions League matches when it made its run to the final a year ago.

In front of Sisneiga, Eddie Segura is the team’s stalwart defender and has been since the 2019 season. Jesus Murillo joined the team toward the end of the 2020 season and steps in as the Segura’s center back pair. The two look like a strong center back pairing and appear capable of keeping things tight in the back for the entire season.

The key to this season though could be midfielder Eduardo Atuesta. The 23-year-old midfielder plays both sides of the field. Vela and Rossi can do what they do on the attacking end partially because of how well Atuesta does his job in the middle. Atuesta missed five consecutive games due to injury a year ago, and the team suffered. Without him in the lineup, LAFC lost many midfield challenges. This was not a team built to absorb that much pressure.

With Vela and Rossi around and on the ball, LAFC figures to control the match that way. More possession conceivably means fewer chances for the opponents. If Vela and Rossi can continue to churn out goals, then the team can pile up the multiple-goal victories on its way to contending for the regular-season Western Conference title.

There is a defensive foundation in place if either doesn’t happen due to injury or if the attacking depth does not come through. Either way, this is just part of the evolution process for LAFC and trying to find the formula that will ultimately lead the club to an MLS Cup. If that happens because of scoring many goals or allowing hardly any, the team will not care. It’s the trophy that matters.