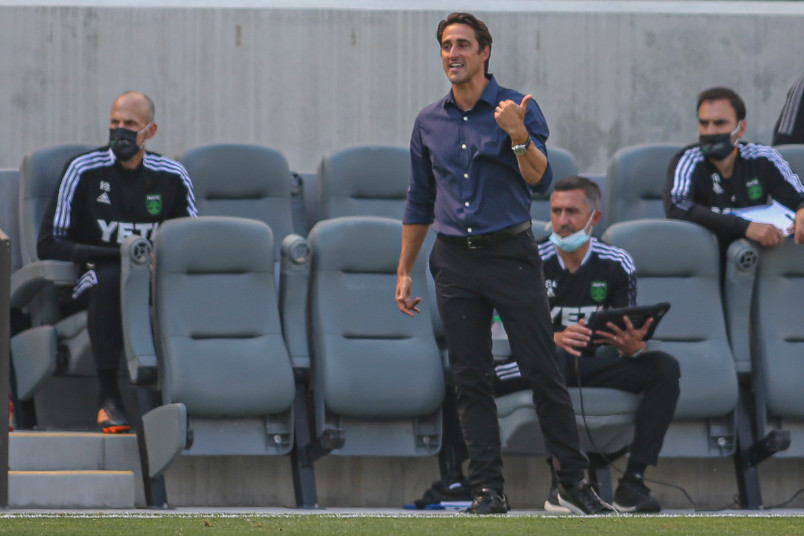 By Jason Davis – WASHINGTON, DC (Apr 21, 2021) US Soccer Players – The start of the 2021 MLS season took place over three days this past weekend, pitting 26 teams against one another in 13 games. Only one team, Real Salt Lake, awaits its turn to get its campaign underway. An odd number of teams this season means there will always be a team sitting out a given round of matches.

Unlike several of the teams that launched their seasons this weekend, RSL isn’t rolling into their schedule with a brand new head coach. DC United, Austin FC, Atlanta United, Inter Miami, CF Montreal, LA Galaxy, and Toronto FC all debuted new bosses in Week 1. Only three of the eight won their first regular-season game in charge. One managed a draw. Two lost, with both of those defeats coming at the hands of other debutant coaches.

It’s a varied group, both in experience and background. Two have previous MLS experience and are now with their second club in the league. Two are Argentine and brought to MLS a taste for the frenetic high-pressure game made famous by the likes of Marcelo Bielsa and Tata Martino. One joins MLS with his only experience coming at international level. Two were true debutants, both in MLS and as senior coaches.

For one of those, Austin FC boss Josh Wolff, it was a 21-month wait from getting the job to coaching a game that counts. Austin is Wolff’s first chance to prove himself as a head coach following an apprenticeship as an assistant first with DC United, then under Gregg Berhalter with both the Columbus Crew and the USMNT.

In their first meaningful game, Wolff’s side did well enough on the road in Los Angeles. The consensus following LAFC’s 2-0 win at Banc of California Stadium was that Austin looked organized and well-coached. It took LAFC more than an hour to find the first goal. Bob Bradley’s side didn’t tack on to the lead until added time. Austin played a similar style to Bradley’s LAFC and played the ball forward on the ground, a sign that Wolff values buildup play.

While Wolff’s team didn’t manage to score its first MLS goal, the match hinted at Austin being competitive in the Western Conference in 2021. If the goals come, Austin could surprise.

CF Montreal’s Wilfried Nancy had a shorter buildup than Wolff’s. Thierry Henry stepped down 40 days before the season opener. That left Nancy with a short runway, but he took advantage of the time he had. CF Montreal beat Toronto FC 4-2 in Orlando. Due to travel restrictions between the United States and Canada, the three Canadian teams are starting the season in the United States. It was a short trip from their new Fort Lauderdale base to Orlando. That doesn’t downplay the dislocation and what impact it might have on the start of the season.

The goal explosion from Montreal took advantage of a sloppy Toronto team that looked fatigued from its midweek match against Club Leon in the Concacaf Champions League. Those caveats won’t matter much to Nancy and his squad, starting the season as playoff outsiders according to most pundits.

Nancy’s win was another debutant’s loss. Toronto FC head coach Chris Armas has already tasted success with his new team in 2021 thanks to the Champions League, but his first MLS game in charge of the Reds wasn’t memorable.

Armas brought the press he ran as part of the Red Bulls organization to Toronto. Against Club Leon, it worked well, forcing them into mistakes. Against Montreal, with Toronto missing several key attacking pieces, it wasn’t as effective. Considering the circumstances, it’s worth giving Armas and his team some time to get back to full strength before passing judgment on the new look.

Two other new head coaches face each other downstate from where Montreal beat Toronto. In one of the most-anticipated games of the weekend, the LA Galaxy under new boss Greg Vanney downed Inter Miami in the first game in charge for Phil Neville.

Vanney adjusted in the second-half following a first-half rich in possession but poor in attacking danger. The introduction of Ethan Zubak unleashed much-maligned Designated Player Javier Hernandez, who finished the game with two goals. Vanney’s remit is to get the Galaxy back to the playoffs, an easier job when Chicharito is on form.

Nevill’s side played a competent game but ran out of gas towards the end of the match. The changes Neville brings to Miami following the departure of Diego Alonso don’t figure to be earthshaking. The club will defend with a pair of holding midfielders, looking to get the ball to the feet of Rodolfo Pizarro and leverage the talents of striker Gonzalo Higuain.

The early returns on DC’s approach show a team that will press consistently and play direct when the ball turns over. Losada’s team will need top-level fitness to make it work, but the mode of play might help make up for a roster that lags behind its rivals on talent.

Gabriel Heinze’s first day in MLS was less exciting than Losada’s. Atlanta played to a goalless draw with Orlando in a game that lacked the energy and edge expected of a budding rivalry. Some of that may have been down to Atlanta’s midweek exploits in the Champions League, but supporters in Atlanta won’t give Heinze much time to bring the goals and the wins.

A bigger MLS with higher stakes means coaches don’t get the same leeway they used to. The microscope is on each of the seven new coaches across the league. For three, the pressure to get the first win is gone. For the rest, the intensity rises for Week 2.