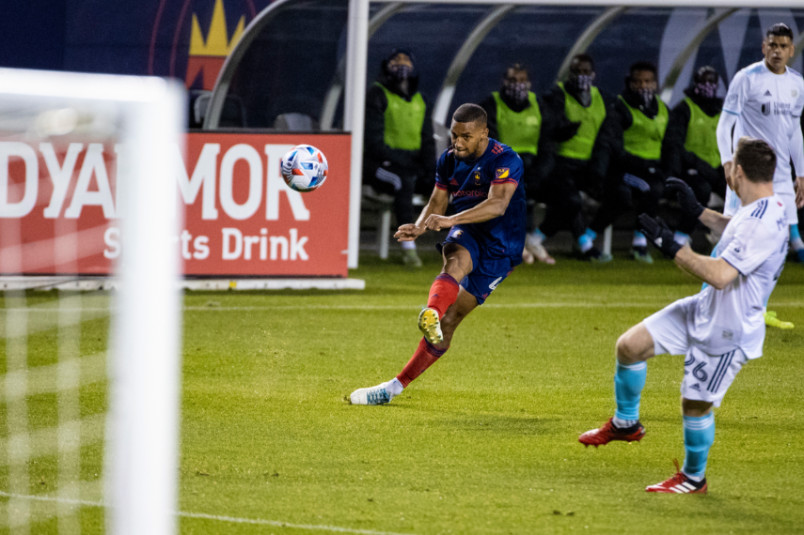 The 2021 MLS season started with Houston beating San Jose 2-1 at home on Friday. Memo Rodriguez scored the first goal of the new season, putting the Dynamo up in the 39th. Maxi Urruti doubled the lead in the 55th. Paul Marie pulled a goal back for the Earthquakes in the 74th minute.

“We are happy we could start with the three points, most importantly I liked the way we played,” Houston coach Tab Ramos said. “I think we played a strong game and I think in the end, when I look at how well we pressed throughout the game and how much we limited San Jose to getting chances. We played pretty close to how we want to continue to play. I feel like the 2-1 score doesn’t necessarily reflect how well we played today.”

Seattle poured it on in the second-half, shutting out Minnesota 4-0 at home. Joao Paulo scored in the 49th with Raul Ruidiaz adding goals in the 70th and 73rd. Fredy Montero finished off the scoring in the 86th minute.

On Saturday, the two Canadian teams temporarily relocated to Florida met in Fort Lauderdale. CF Montreal held up at home with a 4-2 win over Toronto. Mason Toye got the scoring started early for Montreal with a 3rd minute goal. Romell Quioto doubled the lead in the 24th. Toronto answered back with a45th minute Marky Delgado penalty. Victor Wanyama extended the Montreal lead in the 54th with Djordje Mihailovic making it 4-1 for his new club in the 71st. Toronto’s Richie Laryea scored in the 88th minute.

Orlando City drew 0-0 with Atlanta at home. Both teams finished with three shots on goal. “The patience is starting to come along,” Atlanta goalkeeper Brad Guzan said. “But at the same time, we also need to have a little bit of quality with the final ball – whether it’s a final passor a final cross – and the ability to shoot from distance and force teams to come out of the box and defend outside their 18-yard box and close guys down.”

LAFC shutout expansion club Austin FC 2-0 at home. Corey Baird scored in the 61st with Jose Cifuentes adding a goal a minute into stoppage time. Carlos Vela subbed out in the 22nd in what turned out to be a misunderstanding over a potential injury concern.

“Look, you make quick decisions,” Bradley said of the early Vela substitution. “Sometimes you take a guy off because you think, you know what, I don’t want it to get worse. It’s the first game of the year. So yes, I jumped the gun, but as a coach, you do a lot of things that players don’t agree with or don’t like. And you don’t go around apologizing for everything every day, either. You say, hey, here is what I did, it’s on me, and that’s it and we all move on.

DC United came back to beat NYCFC 2-1 at Audi Field. Trailing from a 15th minute Valentin Castellanos goal, Brendan Hines-Ike equalized in the 39th. Russell Canouse put DC up for good in the 44th minute.

FC Dallas and Colorado finished scoreless at Toyota Stadium. The Rapids had the lead on shots on goal six to five.

Sporting Kansas City opened with a road win, coming back to beat the Red Bulls 2-1. Caden Clark put New York up in the 48th minute. Gadi Kinda converted a Sporting penalty in the 59th with Daniel Salloi doubling the lead a minute later.

Chicago and New England drew 2-2 at Soldier Field. Robert Beric scored for the Fire in the 5th with Luka Stojanovic making it 2-0 in the 11th. The Revolution responded quickly through a 14th minute Adam Buksa goal and with Gustavo Bou equalizing in the 27th. New England finished a man down with a stoppage time red card to Dejuan Jones.

“It certainly was not a good start in the game,” New England coach Bruce Arena said. “To fall behind by two goals in the first 10 minutes is poor. After 90-plus minutes, to walk off the field with a point is good. Having said that, on the day I don’t think we played particularly well.”

Nashville and Cincinnati also finished 2-2 at Nissan Stadium. Cincinnati’s Luciano Acosta opened the scoring on the road in the 8th with Brenner converting a penalty in the 12th minute. Jhonder Cadiz pulled a goal back for Nashville in the 20th with Randall Leal equalizing in the 64th.

The LA Galaxy picked up three points at Inter Miami, winning 3-2 on Sunday. Robbie Robinson put Miami up in first-half stoppage time. Chicharito Hernandez equalized in the 62nd and gave the Galaxy the lead in the 73rd. Gonzalo Higuain equalized from the penalty spot in the 68th. Sacha Kljestan scored LA’s winner in the 81st minute.

Columbus and Philadelphia finished 0-0 at Crew Stadium. Columbus had the lead on shots on goal six to five.

Week one ended in Vancouver with the Whitecaps shutting out Portland 1-0. Lucas Cavallini scored in the 49th minute with Maxime Crepeau making two saves to keep the clean sheet.